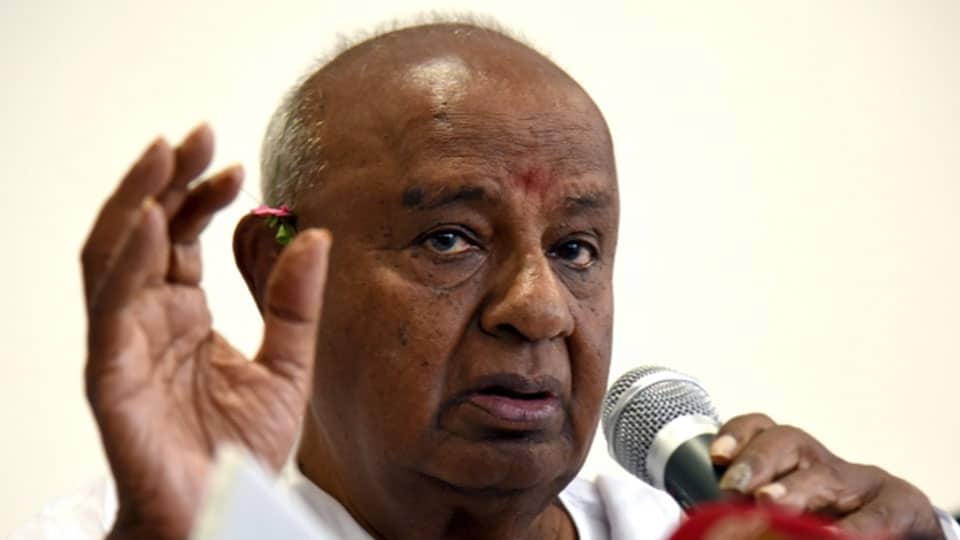 Deve Gowda dismisses PM Modi’s remarks on him as insignificant

Bengaluru: A day after Prime Minister Modi heaped praises on him, JD(S) supremo and former Prime Minister H.D. Deve Gowda yesterday described the comments as a “magnanimous gesture” but sought to underplay it saying: “I don’t want his praise or abuse.” Gowda was quick to add that the new-found mutual bonhomie was not indicative of any alliance between JD(S) and BJP, in the event of a hung Assembly.

Participating in ‘Meet the Press’ organised by the Bangalore Press Club and Bangalore Reporters Guild in Bengaluru yesterday, Deve Gowda said it was the practice of Modi to do his homework well before visiting a State and accordingly he played the card. Modi, during the course of his public address in Udupi, had chided Congress President Rahul Gandhi for showing disrespect to Deve Gowda, whom, he termed as a tall leader of the country.

Gowda said the PM is a smart politician. “Modi is aware about the happenings in Karnataka politics, and also what Rahul Gandhi said about me. In this background, he must have praised me out of respect.

What he said is true, but that doesn’t mean I don’t have any differences with him,” Gowda said.

On Rahul Gandhi, Deve Gowda said he would not make any comment as Rahul has to learn a lot in politics. Gowda said it was the same Prime Minister who twisted his remark that he (Deve Gowda) would quit Parliament if BJP won majority on its own in the Lok Sabha elections to say that he would move out of the country.

Modi in response to it had stated that Deve Gowda could stay in any of the old age homes in Gujarat.

Deve Gowda when he went to tender his resignation from the Parliament, Modi forced him against it stating that such repartees during poll campaign should not be taken seriously. He said when he met the Prime Minister on a few occasions to press some of the important issues, including release of 8 tmcft of water in the Mahadayi River for drinking purpose, Modi had remained silent without making any remark.

Deve Gowda, responding to the stance that the JD(S) would take in the event of a hung Assembly, asserted that his party would secure majority on its own. Irrespective of various surveys indicating that the JD(S) would finish third and no one would get majority, he said the ground reality is different and his party was getting spontaneous response from the people.

When asked whether the JD(S) will back Congress “minus Siddharamaiah” as candidate for Chief Minister, Gowda said: “There is no question of aligning with anybody in case of fractured mandate.”

Stating that the 2018 Assembly elections is a fight between national political parties and a regional party, he said there was need to promote regional parties for a healthy federal set up. He said several Chief Ministers in the past, including D. Devaraja Urs, Ramakrishna Hegde, S. Bangarappa and even B.S. Yeddyurappa attempted their hands in vain for establishment of a regional force.

He said he had conveyed his blessings to the Third Front and had indicated that he could not be an active partner in view of the age factor.

‘My photo was removed’

Diverting his attention towards Chief Minister Siddharamaiah, the former PM said that when J.H. Patel was the CM of Karnataka, he had put his (Deve Gowda’s) photograph at the Vidhana Soudha. “My photograph was retained during the term of S.M. Krishna, N. Dharam Singh, H.D. Kumaraswamy and B.S. Yeddyurappa. But as soon as Siddharamaiah became the CM, he got my photo removed,” Gowda revealed.