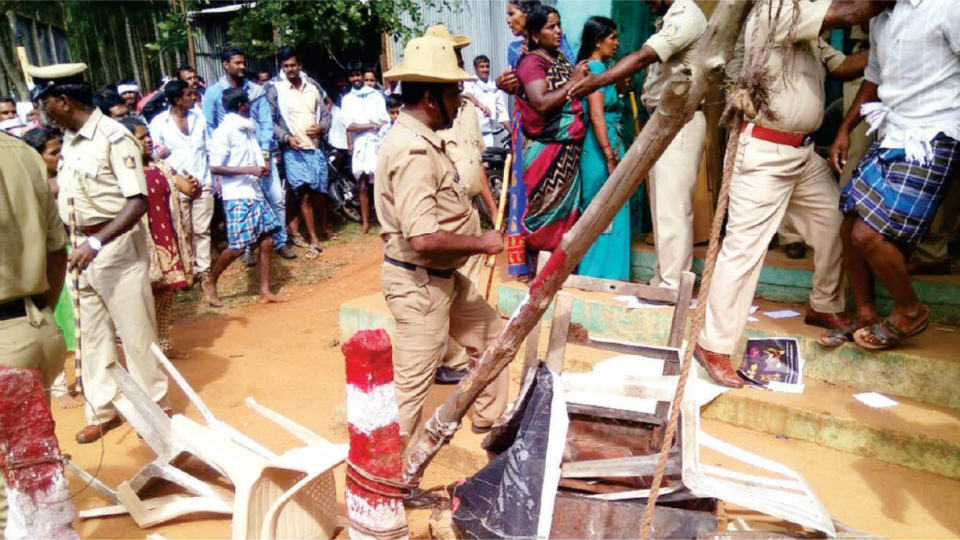 Gundlupet:  The National Highway 766, which connects Kerala with Karnataka, was blocked for over three hours near Maddur check-post in the taluk, following a duel and clash between the Forest Department officials and devotees of Inuru Marigudi Temple yesterday. A Forest Department official was reportedly injured in the clash. The temple is located in Kalkere Forest Range coming under Bandipur Tiger Reserve in the taluk. The trouble broke out after the Forest personnel stopped a large number of devotees who were on their way to the temple to offer puja on the occasion of Ashada month.

The officials, denying permission, stopped the devotees, hundreds of people breached the barricades and staged a protest, which resulted in disruption of vehicular traffic.

Thousands of devotees from Nanjangud, H.D. Kote and several other parts of Mysuru and Chamarajanagar districts, visit the temple to offer puja in Ashada month. But the Forest Department officials, citing forest fire last February in which a Forest Guard was killed and the visit of a large number of people, entering the forest, would result in the disturbance of animals and the chances of forest fire are high, had limited the entry of devotees to the forest temple. The Forest Dept. officials after denying entry, had set up check-posts at Kalkere and Maddur Forest Ranges and deployed STPF personnel at the check-posts.

The officials, including ACF Anthony S. Mariappa and K. Parameshwar and Dy.SP S.E. Gangadhara Swamy, tried to convince the devotees by asking them the visit the temple in groups of 25 people each. But the devotees disagreed and entered into a wordy duel with the officials and breached the barricades, besides blocking the road.

Moolehole RFO Sunil suffered injuries on his hand in the duel. The officials realising that the situation was going out of control, allowed the devotees to visit the temple under STPF and Police security. ASP Geetha Prasanna visited the spot.

ONE COMMENT ON THIS POST To “Devotees, officials enter into duel over entering forest for temple visit”