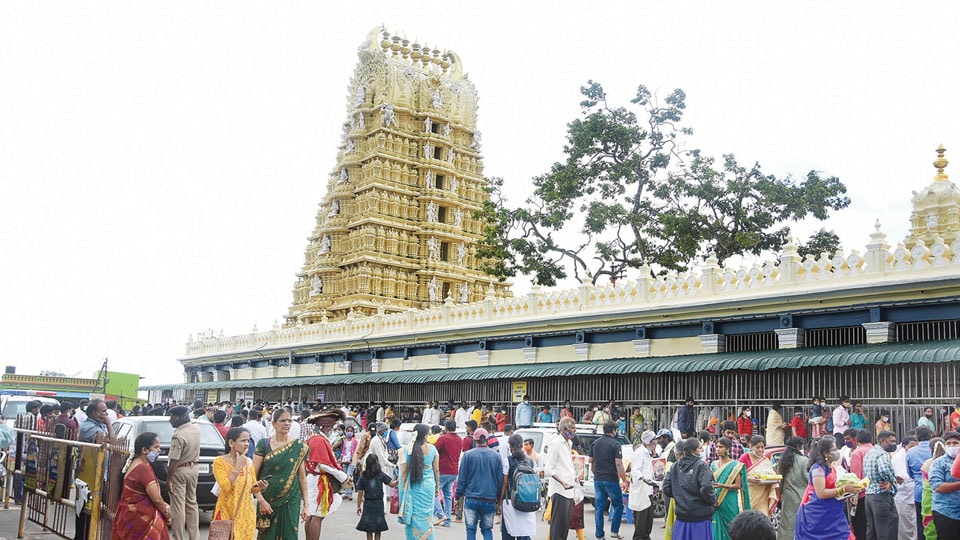 Mysore/Mysuru: Today, Aug. 3 being the last Tuesday of the auspicious month of Ashada, nearly 10,000 devotees thronged Sri Chamundeshwari Temple atop Chamundi Hill in city to have a Darshan of the Goddess.

It is for the first time during this year’s Ashada month that such a crowd is being seen as devotee entry has been banned on all Ashada Fridays and weekends. Devotees can visit the Temple only from Monday to Thursday and as such there was heavy rush today.

Aug. 6 will be the last Ashada Friday and the Bheemana Amavasya puja is on Aug. 8, again a Sunday where the entry ban will be enforced. So today was the only auspicious day for the devotees to have a Darshan of the Goddess.

People were seen entering the Hill from all the routes including steps as the Police did not prevent entry unlike the other days when the entry ban was in force. Long queues were seen in the serpentine pathway to the sanctum sanctorum and also to the prasadam counters.

Ashada is auspicious for many people and some even make vows that they would mandatorily visit the Temple during Ashada month especially Tuesdays and Fridays that are considered auspicious for Goddess of Shakthi.

As the ban is in force on Fridays and weekends, today people made use of the auspicious Tuesday to visit the Hill Temple. Rush was also seen near the Nandi Statue on the way to the Hill and at some points there were traffic snarls. Not only Mysureans but people from other places too visited the Temple.

Notably, many devotees who came to the Temple did not visit the sanctum sanctorum as strict social distancing measures were implemented inside. Many devotees prayed outside the  Temple and returned home.

Today the weather too was pleasant and with no rain and hot sun, it was a memorable visit for many devotees who came early in the morning to see the mist-covered Temple.

As today is the auspicious last Tuesday of the Ashada month, many people celebrated ‘Chamundi Habba’ at several localities in the city where prasadam was distributed under pandals.