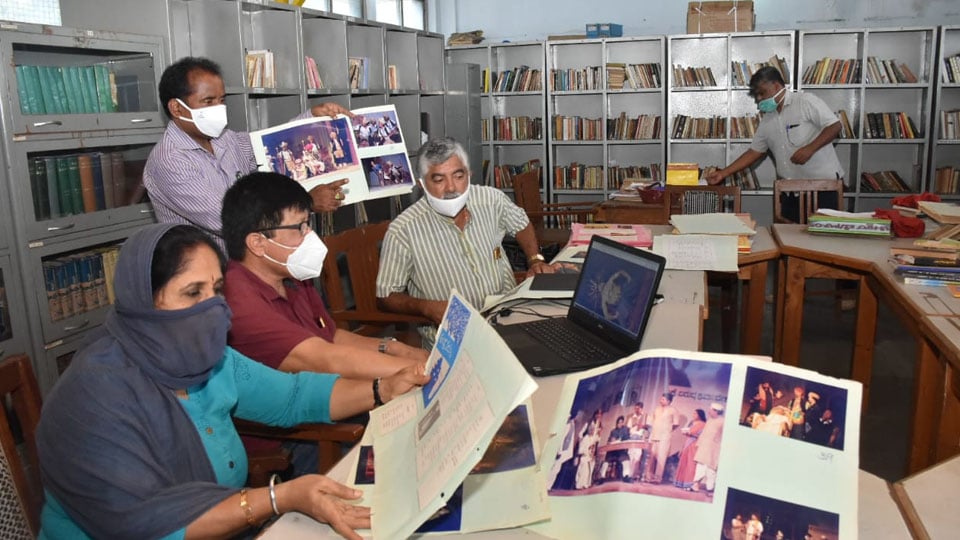 Digitisation to change script for Rangayana

Mysore/Mysuru: Digitisation is profoundly changing the experience of theatre, not only in terms of new technology-based access, production and dissemination, but also in terms of participation and creation.

Be it through smartphone apps, streaming media or 3D effects, digital technology has crept into the modern theatre. Artistes and art directors have been experimenting with technology for years to enrich their work, revitalise theatrical performance and make theatre more relevant to digital audiences.

Following the footsteps of world theatres with regard to going digital, Mysuru’s theatre repertoire Rangayana, led by its Director Addanda C. Cariappa has begun digitisation of all plays staged and theatre festivals hosted by it since its inception over 30 years ago and also the theatre songs for which renowned playwright and Rangayana’s first Director B.V. Karanth has composed music.

Speaking to ‘Star of Mysore’ this morning, Cariappa said that Rangayana has assets including sets, costumes, properties, light and sound system. “Over the years, the storage space of these assets had turned a dumpyard with no documentation whatsoever. Digitisation of all the physical assets will enable us to protect them and at the same time transfer them to the next generation,” he said.

Digitisation will enable reuse of assets and it will provide valuable information on the growth of Rangayana in phases. “Also, at present, there is Rangayana Repertoire, Senior, Junior Repertoires and a School. Much has been written on them and we have loads of photos of plays. We are documenting all of them in electronic form,” he said.

A list of plays that have not been digitised so far has been prepared and the digitisation process has begun from today. This is being done to ensure that theatre lovers do not forget old plays with the passage of time. As this is a fresh initiative, artistes will be trained on enacting the old plays, he said.

Use of digital technology

Primarily, digitisation is the use of digital technology to project dramas and also to distribute them — from analogue content to online. With digitisation, there is the flexibility of programming which makes it cost-effective and digital content will remain in the same condition year on year, he explained.

“The new initiative aims to encourage an effective exchange of ideas on how theatre (Rangayana) can be brought closer to online communities. Stages can be transformed with technology in order to garner more engagement by both offline and online audiences,” Cariappa added.

After the recording is over, plays will be uploaded on social websites, he said and added that this apart, the songs for which B.V. Karanth has composed music, will be sung by senior theatre artiste Ramachandra Adapa which will also be recorded and digitised.

Stating that it has been proposed to set up a first-of-its-kind ‘Theatre Library,’ Cariappa said that the Library will feature a well-equipped recording room, a hall and a studio. Asserting that the library is one of the ambitious projects of Rangayana, he said that the modalities will be discussed with artistes and staff, following which a proposal will be sent to the Government.

Highlighting the other activities of Rangayana, Cariappa said that they include expansion of greenery and upkeep of all drama equipment, costumes and other paraphernalia.

Noting that it has been planned to plant 100 saplings in Rangayana premises in association with the Forest Department, he said that several rare species of plants are being brought from Kodagu too and planted in the campus.

“All theatre properties at Rangayana are being cleaned and organised. All decorative equipment are kept at Lankesh Gallery and lighting props are moved to a separate room. Each and every property belonging to Rangayana will be preserved carefully,” said the Rangayana Director.

Reacting on the same, senior artiste Geetha Montadka said, “For many years, properties including CDs and files were not arranged properly. Some properties were also drenched during rains. Hence, taking care of the properties required for Rangayana theatre activities is our responsibility. Earlier, we had to depend on others to keep the Rangayana building clean and to maintain the props by drying and arranging them. Also, to organise files we used to depend on others. But, now for the past two months as there are no activities at Rangayana due to lockdown and all of us artistes unitedly have taken up the cleaning and organising works. This has indeed brought happiness to all of us and also increased our responsibilities.”