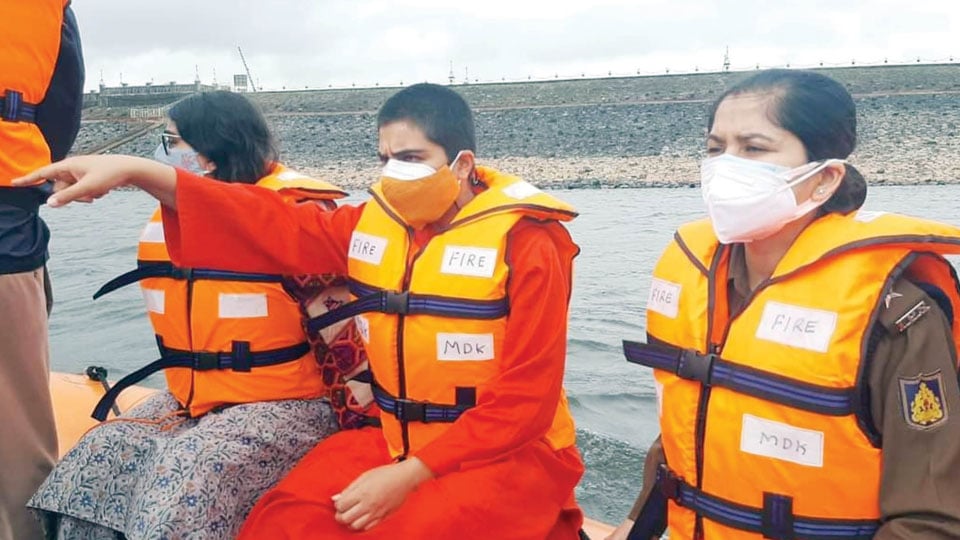 Kushalnagar: Realising that disaster preparedness is crucial for prevention of losses and successful coping as well as building community flood resilience, the Kodagu District Administration, in coordination with the National Disaster Response Force (NDRF), Fire and Emergency Services Department and the Police conducted a mock exercise to gauge its preparedness for the recurring annual floods in the District.

The exercise was conducted yesterday in the Harangi Reservoir that is reaching its full capacity owing to copious rains. The exercise ensured reduced loss of people, their assets and livelihoods and it included testing of risk information sharing devices and techniques, practicing of rescuing people at risk, providing first-aid service, bringing people and their assets to safe place and informing local security personnel.

Also, measures were chalked out to bring affected people to relief centres, provide food and shelter to them. Kodagu Deputy Commissioner Charulata Somal and Superintendent of Police Kshama Mishra led the drill.

The DC said that the aim of the exercise was to check disaster preparedness of all the departments and find the gaps in resources and communication system in the district besides spreading awareness among the stakeholders and the general public regarding their role. She said that such mock exercises were important as it helped in proper coordination, decision-making, prompt response and other life safety aspects at the time of any incident.

During the event, the response forces presented various rescue and response techniques utilised to save lives during flood-like situation including rescue of drowned persons due to boat capsize, river crossing rope rescue, resuscitation of victims, use of improvised floating aids and deep diving in case to fish out bodies.  “We have done an audit on equipment available for relief and rescue operations including inflatable boats, backhoe machines, earth movers, ropes, personal suits etc. Local Gram Panchayats too will be involved in the relief operations and personnel have been kept on high alert,” the DC added.

Simulation exercise with water was conducted to assess the preparedness of the district’s machinery to handle the disaster. “The exercise helped improve the administration’s capacity in mobilising resources and reaching out to the affected communities swiftly in case of an actual flood situation. We have made all preparations to face floods and landslides,” SP Kshama Mishra said.

Already the 20-member NDRF team has surveyed the vulnerable areas and have chalked out plans in case of emergencies. The District is likely to receive more rains as again the India Meteorological Department (IMD) has issued an orange alert. Though there is a slight break in rains today, the showers will intensify by evening, said IMD data.

There was a landslide near Napoklu Church last night. The church and residence of Parish Priest Fr. Gnanaprakash —  just a few feet away — are in danger.

Also, the road between Kundalli and Kannalli Katte in Somwarpet Taluk has caved in risking the lives of motorists. A landslide has been reported at Madikeri near the Post Office after mud was dug out to construct a nearby building.