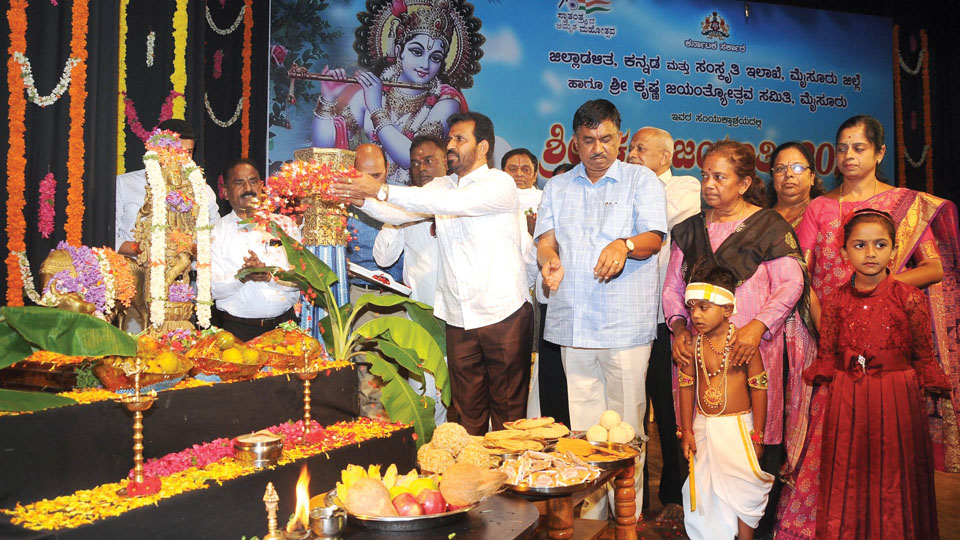 Mysore/Mysuru: Showering of flower petals on the portrait of Lord Krishna marked the Krishna Janmashtami celebrations organised jointly by the District Administration, Kannada and Culture Department and Sri Krishna Jayanthotsava Samithi at Kirurangamandira in Kalamandira premises on Hunsur road here this morning.

Speaking after inaugurating the programme, MLA L. Nagendra said that Krishna Janmashtami, also known as Gokulashtami, is an important festival celebrating the birth of Lord Krishna.

Pointing out that Krishna is believed to be the eighth incarnation (Avatar) of Lord Vishnu and is revered across India, he said that the day is celebrated with great exuberance, with devotees singing through midnight and jagaran (night vigil).

Stating that Lord Krishna is described as the God of love, compassion and tenderness, he said that the festival is also celebrated in many countries across the world including America, with ISKCON playing a key role in the celebrations. Lord Krishna is revered as he is believed to perform miracles with his supreme powers, he added.