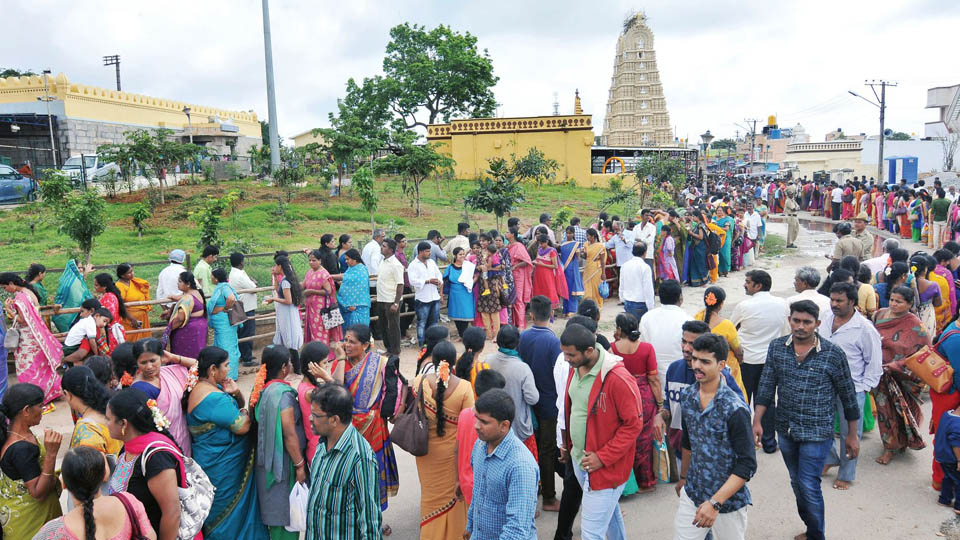 Mysuru: Deputy Commissioner Abhiram G. Sankar directed the officials to make all preparations for the Ashada Shukravara (Ashada Fridays) beginning on July 20 to facilitate thousands of devotees to offer prayers to Goddess Chamundeshwari atop the Hill.

He was addressing a preliminary meeting at the Dasoha Bhavan atop Chamundi Hill here on Friday and asked the officials to provide all basic amenities to the devotees.

The first Ashada Shukravara falls on July 20 and the subsequent ones are on July 27, Aug. 3 and Aug.10 is the last Ashada Shukravara. As a lot more devotees are expected this year to Chamundi Hill, the administration will see that no stone is left unturned to make their pilgrimage memorable.

Just like every year, this year too, the entry of private vehicles will be banned and parking lot created near Lalitha Mahal Helipad from where the KSRTC buses will provide free service to the devotees to the hilltop.

He directed the officials to put up barricades to control the rush and provide proper security atop the Hill, drinking water, station Para Medical Force, Ambulance and Fire-fighting personnel.

Signboards have to be put up for the devotees who climb the Hill and precautionary measures taken by asking electricians to check the electrical works. Stress should be laid on cleanliness and on toilets, he suggested.

The prasadas distributed to the devotees must be checked for quality. All arrangements must be made at Dasoha Bhavan and see that every devotee gets prasada. The DC also cautioned against the use of plastics and to take necessary action against those who violate the rules.

He also asked for more CCTV cameras to be installed to prevent theft of mobile phones and gold ornaments. Steps must also be taken to see that traffic jams do not occur. He directed all the Police Officers and the officials from other Departments to manage Ashada Shukravaras for four weeks in a disciplined way.

Since Total Lunar Eclipse will occur on July 27, the second Ashada Shukravara,curtains will be drawn for darshan of Goddess Chamundeshwari at 9 pm.

As Chamundeshwari Vardanthi falls on third Ashada Friday, there will be huge rush of devotees and hence proper arrangements must made to control the crowd, said Sankar.