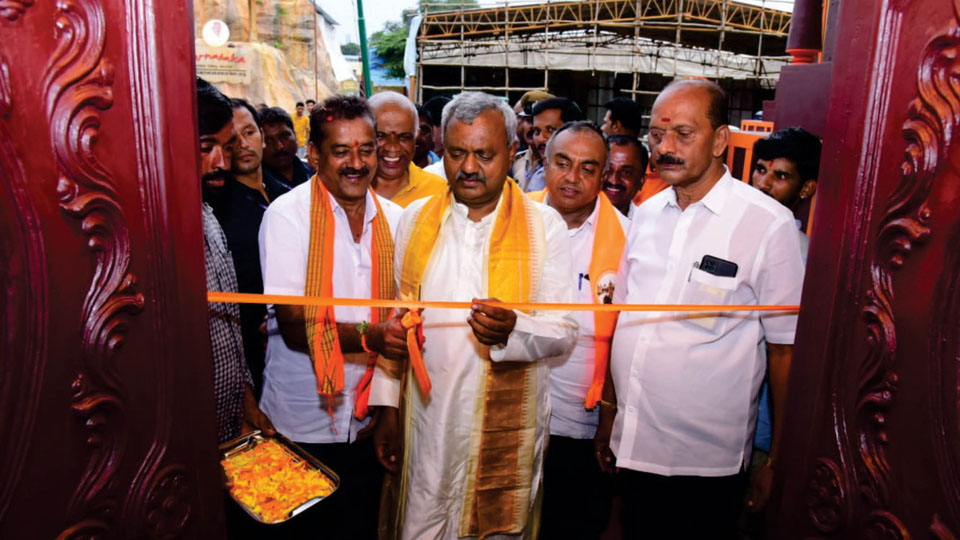 Mysore/Mysuru: True to the common perception in Mysuru that Netas will have a field-day during Dasara every year while officers and volunteers will be doing all the hard work, the limelight on 2022 Dasara is on Mysuru District Minister S.T. Somashekar, who actually hails from Bengaluru.

And knowing well that the focus will be on him, the Minister was dressed traditionally and impeccably with cream kurta, dhoti with golden border and a matching shalya with a black slipper.

Somashekar was on an inauguration-spree on the festival opening day and from the Chamundi Hill where President of India Droupadi Murmu inaugurated the festivities till the inaugurations that happened till late in the evening, it was Somashekar all the way. He also went to the Mysore Airport to welcome the President along with the Governor and the CM.

During the main event with the President, no elected representatives from Mysuru got a chance to be on the stage including Chamundeshwari MLA G.T. Devegowda, MP Pratap Simha and Mayor Shivakumar due to protocol restrictions by the President’s Office.

Somashekar got the chance of inaugurating most of the events as Chief Minister Basavaraj Bommai had to be with the President at Dharwad and even the State Sangeetha Vidwan Award that is usually presented by the CM had to be presented by Somashekar, who is next in command for Mysuru District after the CM.

He happily inaugurated the Dasara Flower Show and even posed for photos with the guests and other officers who were also dressed for the occasion. Somashekar was part of the Kaigarika Dasara though Industries Minister Murugesh Nirani inaugurated it.

Later, Somashekar inaugurated the Dasara cultural events at the Mysore Palace and presented the State Sangeetha Vidwan Award. On the sidelights, Somashekar also inaugurated the exhibition stall set up by the Information and Publicity Department at Dasara Exhibition Grounds.

Speaking on the occasion, Somashekar said that the 3-month-long Dasara exhibition is being held in a much more organised manner when compared to the past. He lauded the efforts of KEA Chairman Mirle Srinivas Gowda in carrying out works in a short span of time and thus ensure that most of the stalls, including those allotted to Government Departments,  are ready by the time of inauguration.

KEA Chairman Mirle Srinivas Gowda said that the Dasara expo is much more attractive this year, with new ideas and concepts.