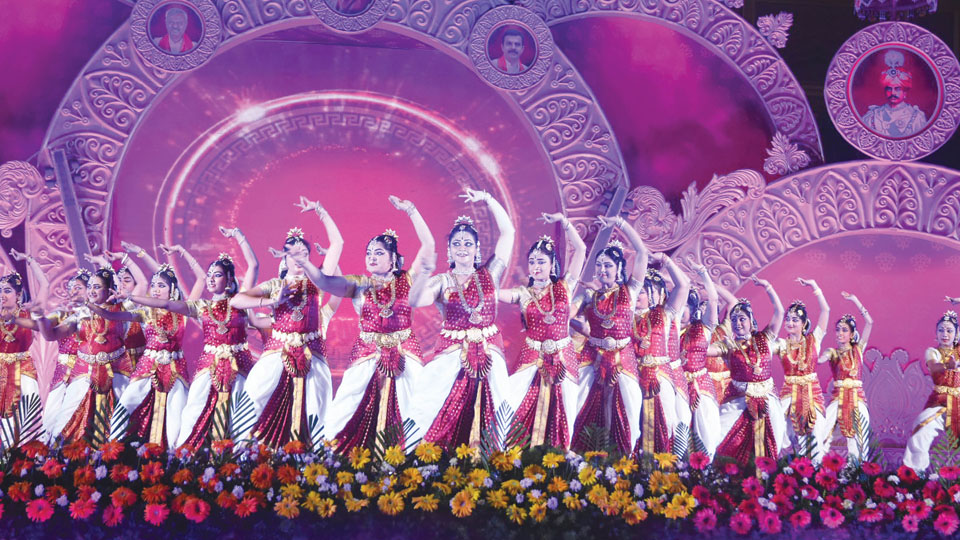 Mysore/Mysuru: The eight-day Dasara cultural programmes got off to a colourful start in the Palace premises amidst glittering lights last evening.

Speaking on the occasion, Assembly Speaker Vishweshwar Hegde Kageri said that we should identify and eliminate the evil within us and in the surroundings.

Noting that the country is facing many challenges even after 75 years of Independence, Kageri said that there are evil forces such as naxalism, extremism, terrorism etc., within the country, which needs to be taken on with an iron hand.

Pointing out that it is a golden moment for Mysuru as the President of India, the first citizen of the country, had inaugurated Dasara for the first time, Kageri said that Mysuru Dasara, apart from being a pride of the State, attracts global attention for its splendour.

Bemoaning that ideals and values are fast declining in all fields and sectors, he stressed on the need for coming out of this vicious circle and strive for building an ideal and model society.

Legislative Council Chairman Raghunathrao Malkapure, in his address, said that the Mysuru royal tradition has been outstanding among the over 500 royal families of the State. Pointing out that Basavanna established the democratic system by setting up Anubhava Mantapa in the 12th century, he said that though Mysuru was ruled by the royal family, the administration was very much similar to a democratic set up.

MLA S.A. Ramdas said that a unique music programme ‘Suryodayadinda Suryasthamanadavarege’ (Sunrise to Sunset) will be held in the Palace premises on Oct. 2 which will feature a variety of musical concerts involving three generations of musicians.

Ramdas further said that the number of visitors to the Palace has more than doubled ever since Prime Minister Modi took part in the International Day of Yoga event held in the Palace premises in June this year.

Mysore Paints and Varnish Limited (MPVL) Chairman Kautilya R. Raghu observed that Dasara will be incomplete if we do not remember the erstwhile Mysore rulers such as the 10th Chamaraja Wadiyar, Nalwadi Krishnaraja Wadiyar, Jayachamaraja Wadiyar etc., Also, great musicians of the royal times such as Veene Seshanna, Bidaram Krishnappa and Piteelu Chowdiah too should be remembered for their excellence, he said adding that the Dasara cultural programme is a perfect platform for portraying out rich culture and traditions.

The day one of the event featured a dance presentation with the theme ‘Amrita Bharatige Kannadadarati,’ presented by Bengaluru’s Saptaswara Arts and Creations, led by Manjula Paramesh, which shed light on the freedom struggle, the sacrifices of freedom fighters and the 75th year of Independence.

Apart from the Palace, the other venues of the Dasara cultural programmes which will go on till Oct. 4 are: Jaganmohan Palace, Kalamandira (inclusive of Kirurangamandira) on Hunsur Road, Ganabharathi on Adichunchanagiri Road in Kuvempunagar, Sri Nadabrahma Sangeetha Sabha on JLB Road, Chikkagadiyara (Dufferin Clock Tower), Town Hall in the heart of the city and Aramane Mala on R.P. Road in Nanjangud town.