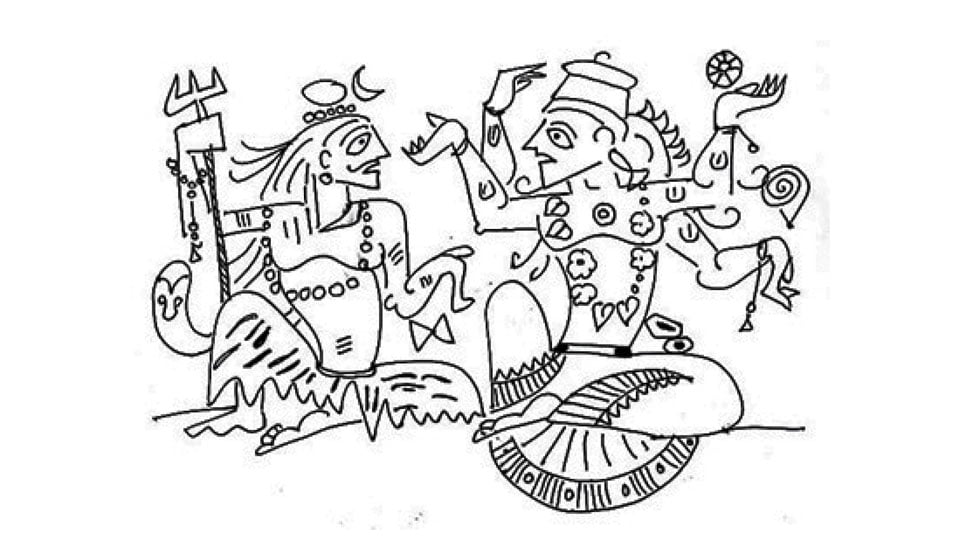 One day Vishnu met Shiva, and they both complained about their domestic situation.

Shiva said, “Gauri, my wife who I place on my lap, gets annoyed that I prefer my other wife, Ganga who sits on my hand. The two never get along. She gets so angry sometimes that she turns into Kali and takes refuge in the crematorium, sitting on top of corpses. And her lions and tigers trouble my poor bull, Nandi. And the snake around my neck is tormented by Kartikeya’s peacock and cannot eat Ganesha’s rat as that will upset him, and in turn his mother. I cannot talk to Ganesha who is annoyed that he has an elephant head and a huge belly to balance it. And it is impossible for me to talk to Kartikeya who has six heads, and so, six mouths. He feels I value Ganesha more than him. The world calls me God, even Vishwanatha, Lord of the world, but I am just a miserable householder, balancing the forces and counter forces of my family.

Vishnu said, ‘My situation is worse. My one wife, Lakshmi, is haughty and demanding because she controls all wealth. My other wife, Saraswati, is quarrelsome because she has so much knowledge. They two never get along. And I have only one son, Kama, who goes around the world shooting arrows of desire rather irresponsibly, and so I get complaints from every corner of the world. To set things right, I have to take various avatars and descend on Earth, and experience mortality. But even there, my wives follow me in various forms, while I solve problems and kill demons. It never ends, no matter how many Gitas I sing. Back home, in Vaikuntha, I cannot sleep in peace, because Garuda, the hawk, is always quarrelling with Sesha, the serpent. They just don’t get along. And then there is the mischevious Narada who claims to be my foremost devotee. I have not a moment of rest nor peace. I, too, am a miserable householder. So much for being Jagannatha. Help me, Shiva.’

READ ALSO  So many different Indras

These two conversations are based on regional poetry linked to grand temple complexes of Odisha and Tamil Nadu. One notices many variations between Puranic lore and temple lore. In Puranas, for example, Shiva usually has only one wife, Gauri, but in temple lore, Ganga, is the other wife. Gauri is patient like the mountain and Ganga restless like a river. In popular Puranic lore, there is neat symmetry with Gauri being wife of Shiva, Lakshmi being wife of Vishnu and Saraswati being wife of Brahma. But in temple lore, Lakshmi and Saraswati are wives of Vishnu. Sometimes, the two wives are Bhu-devi and Shri-devi.

The songs speak of polygamy. Here daughters are conspicuous by their absence. It can be seen as endorsing patriarchy, rather than helping people deal with household issues, and reflecting the social structure of the time, without judgement. But then we are missing the point. The malaise of modern scholarship on Hinduism often comes from the assumption that Hindu sacred texts, like Bible and Koran, are instructive and seek to ‘reform’ humans. That is not the intention of Hindu texts. Songs such as these were simple ways of placating householders by informing them even Gods have to face the same problems as humans.

By such dialogues, Gods were humanised and made part of daily life. These dialogues also reveal an attempt to make peace between Shaiva and Vaishnava worshippers, a sectarian divide that was quite intense in medieval times, and remains intense in many parts of India today. The intention was to ‘solve problems’ but bring peace in the household and in society through empathy.