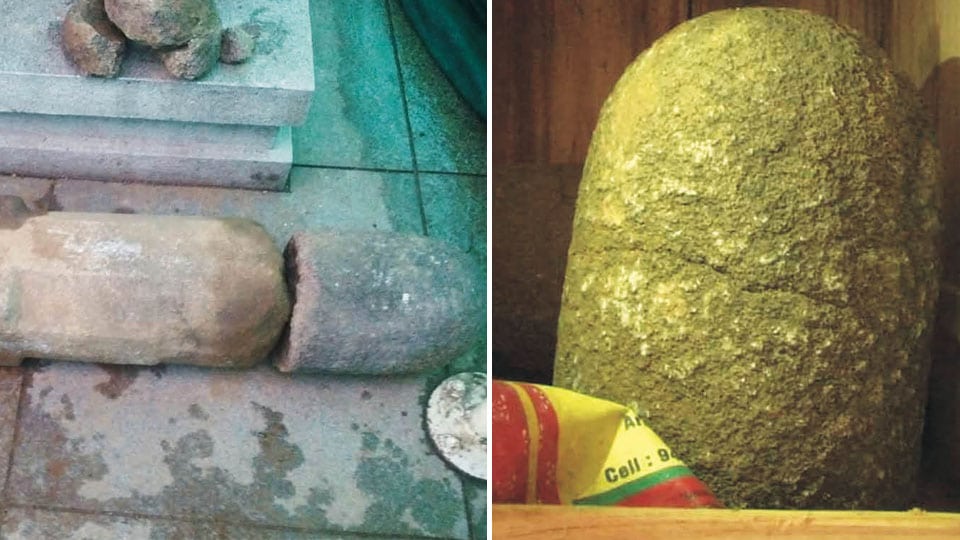 Madikeri: The Karnataka High Court has passed an interim order restraining the removal of Agasthyeshwara Shivalinga from Agasthyeshwara temple in Talacauvery, Kodagu district, the birthplace of River Cauvery.

A Division Bench, headed by Acting Chief Justice L. Narayana Swamy, passed this order after hearing a petition filed by Lohitt Urs, a resident of Mysuru and represented by Advocate O. Sham Bhat. According to the petitioner, the Shivalinga was believed to have been installed by Saint Agasthya and the State Government as well as the Archaeology Department, instead of protecting the said monument, are making efforts to remove the same and immerse it in the sea.

The petitioner has claimed that if the Shivalinga is removed, the same will hurt the feelings as well as sentiments of devotees as well as the general public. The temple is under the management of the State Government’s Muzrai Department and the Court order has been communicated to the respective Departments by Additional Public Prosecutor D. Nagaraj.

The Temple Committee had unearthed a Shivalinga near Agasthyeshwara Temple in Talacauvery Kshetra, several months ago. But as the Shivalinga was found to be broken, it was decided to immerse it in Poompuhar in Tamil Nadu.

Following a difference of opinion between the villagers and the Temple Committee, some devotees approached the Court. They attributed the natural calamities in Kodagu to the unearthing of the damaged Shivalinga and to the decision of immersing it.

HOW SHIVALINGA WAS FOUND

A series of development works were carried out at Talacauvery and Bhagamandala Kshetra in 2005 at a cost of Rs. 15 crore and as the original Shivalinga at Agasthyeshwara Temple was found to be damaged, it was replaced by a new Shivalinga.

The broken Shivalinga was placed in a copper container by the Temple Committee and was buried as per the suggestion obtained through ‘Ashtamangala Prashne’ rituals that were led by a team of astrologers from Kerala comprising Narayana Poduval, Chodyagara Shyama Shastri and Thantri Padmanabha Neeleshwara.

But in 2006, during a ‘Thamboola Prashne’ ritual, it was revealed that the Shivalinga should not have been buried. Instead, it should have been immersed in the sea. A few days ago, the buried Shivalinga was unearthed as per the advice obtained through another ‘Ashtamangala Prashne’. The Shivalinga is now placed      in a box.

Meanwhile, noted advocate and religious thinker from Mysuru O. Sham Bhat approached the High Court through a writ petition and opposed the immersion of Shivalinga as it is said to be consecrated by Sage Agasthya. The petitioners in the case are Ananth P. Bhat and Lohitt Urs and the other parties in the petition are Commissioner for Hindu Religious Institutions and Charitable Endowments for the State of Karnataka, Kodagu Deputy Commissioner, Assistant Commissioner, Talacauvery Temple Committee President B.S. Thammaiah and priest T.S. Narayanachar.

Hearing the writ petition, the High Court has directed the authorities neither to immerse the ancient Shivalinga in the sea while performing rituals and other ceremonies nor cause further damage to the Linga in the name of rituals. Sham Bhat had argued that there is a specific rule that states that idols and religious symbols that are more than 100-years-old must not be shifted from its original place.

He had argued that Saint Agasthya is revered even now by many religions and the Shivalinga installed by the Maharshi is of great significance and value and destroying such a Shivalinga will not only hurt the sentiments of the people but also if immersed in the sea, the Linga will be lost forever.

“There is a history of thousands of years behind the Shivalinga and Saint Agasthya has established many such Lingas across the country. Goddess Cauvery emerged from the ‘Kamandala’ of Saint Agasthya and there are historical and religious references to establish this. Moreover, River Cauvery is worshipped as a Goddess,” Sham Bhat argued.

According to officials from the Archaeological Survey of India, the Shivalinga dates back to the period of Ganga Empire and is 1,000 years old. However, there is a dispute regarding this as communities associated with the temple say that the Linga was established by Saint Agasthya. “Originally it was a five-foot Shivalinga which broke over the years due to improper handling and negligence. Now only the top portion remains and the Temple Committee was ready to immerse it. This has been stayed by the High Court,” they said.

Reacting on the High Court order, Talacauvery-Bhagamandala Temple Management Committee Chairman B.S. Thammaiah said, “The Temple Tantri was about to write to the Deputy Commissioner regarding the immersion of Shivalinga. The date was finalised for immersion. However, the High Court orders will be adhered to and we will submit our plea before the Court as per the Tantri’s directions.”