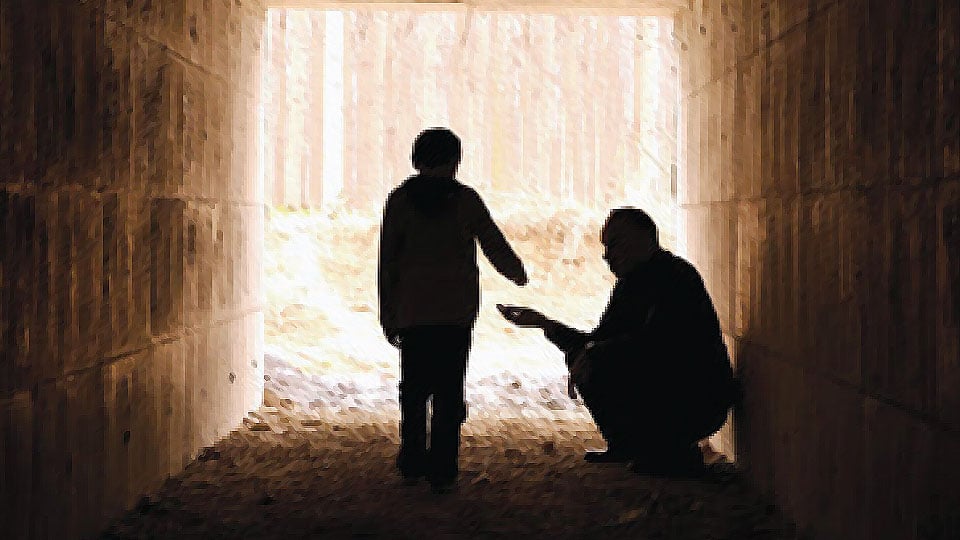 A simple story: I parked in front of a Mall, wiping my car when a tramp approached me. From the looks of him, he had no car, no clean clothes and no money.

“I hope he does not ask me for some money,” I thought.

He sat down on the curb and after a few minutes he spoke.

“That is a very pretty car,” he said.

He was ragged but he had an air of dignity around him. His scraggy beard  looked good.

I said “thanks” and continued to wipe the car.

He sat quietly, the expected pleas for money never came.

As the silence between us widened something inside me said, “Ask him if he needs any help.”

He answered in three simple but profound words that I shall never forget.

We often look for wisdom in great men and women. We expect it from those of higher learning and accomplishments.

I expected nothing but an outstretched grimy hand. But he spoke the three words that shook me. “DON’T WE ALL,” he said.

I was feeling high and mighty successful and important above a tramp in the street until those three words shook me up.

Maybe not for money or a meal or a place to stay but I also need  help sometime in my life.

I reached in my wallet and gave him enough to get a warm meal.

No matter how little you have, no matter how much loaded you are with problems, even without money or a place to sleep, you can give help.

Even if it is just a compliment, you can give that.

You never know when you may see someone that appears to have it all but they may be waiting for you to give them what they don’t have or a different perspective of life.  A glimpse of something beautiful !

May be he was sent by a power that  is great and wise to Minister to people too comfortable in themselves.

May be God looked down, called an Angel, dressed  him like a tramp, then said, “Go Minister to that man cleaning the car, that man needs help.”

How true? From Modi to Ambani, everyone needs help sometimes in their lives.

When I started to ponder on my own life I  could not even remember the number of times I required help and someone did come  forward.

During my final year of the  Catering College, I recollect, I did not have enough money to pay my final year fees. The College had politely told me that I could not sit for the exams if I did not pay the fees. Out of  sheer desperation I wrote to my uncle with whom I had not been in touch for years, with little hope. In fifteen days the money arrived in the form of a Money Order — 650 rupees, big money in the sixties.

READ ALSO  Listen to your heart and decide

The greatness of my uncle was that he never ever mentioned about this help ever to me or to any other relative including his own daughters. I was so inspired by this that in my service I have gone out of my way to help people in matters of promotions, postings etc., and not brag about it. That is the reason even after ten years of my retirement from active service people come from all over the country and inquire about my health whenever they drop in to this city.

A second incident which I remember vividly happened in Tirupathi. My father’s pocket had been picked by a pickpocket and we were in the middle of our tour without a single penny! Suddenly out of nowhere, a Godsend friend  appeared and on hearing our plight he loaned us enough money for the return journey !

Remember, everyone requires “help” sometime in life. Why do the rich and the famous throng all the spiritual leaders?  Simple, for help to achieve peace of mind and moksha ! A man or a woman cannot live in isolation. So, as much as possible, try to help. Every help need not be in forms of money but it can be a service too. We do not want to hear another story of a man lying on the road badly injured and nobody comes forward to help but everyone around busy taking selfies as it happened in Jaipur !

To conclude, “Don’t we all?”  Readers, ponder, everyone of us have required help in some form or the other and we get it from unknown and unexpected quarters too !