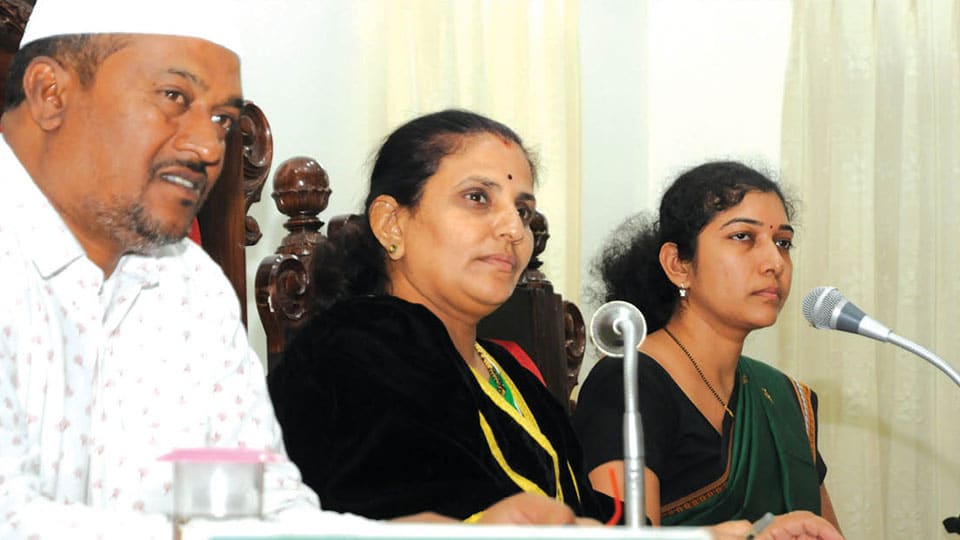 Mysuru: The Special Council Meeting of Mysuru City Corporation (MCC) convened yesterday has decided to refer the case related to irregularities in civic works worth Rs.1.4 crore to Anti Corruption Bureau (ACB). Mayor Pushpalatha Jagannath, who is also the Chairperson of the Fact-Finding Committee constituted to probe the allegations in detail, has decided to seek ACB probe into the same.

The Mayor directed MCC Commissioner Shilpa Nag to lodge a complaint in this regard. The Mayor recommended the authorities to black list Class One contractor Karigowda and third party consultant CADD Station Solutions Pvt. Limited for being a part of the irregularities. MCC also decided to send a report to the State Government seeking action against MCC Assistant Executive Engineer Sunil Babu, MCC Zone-1 Office Junior Engineer M.N. Mohanakumari and contractor Karigowda, following the report of the Probe Committee.

The Probe Committee, which was constituted by the MCC in connection with Double Billing Scam where Rs.1.4 crore was allegedly siphoned off by submitting two bills for the same work, has found that the allegations are prima facie true. The Committee found that officials have claimed double the bill for a single work.

The complainant in this case is Council Opposition Leader B.V. Manjunath. Subsequently, the MCC constituted the Committee to investigate.

MCC Zone-1 received Rs.4 crore under MCC Special Grants and the Corporation took development of road and drains to NH-212 near M.G. Road via Agrahara Circle and invited tender. Civil Contractor Karigowda won bid for Rs.3.21 crore to complete the works in three phases. The first and second phase of works was completed for Rs.2.28 crore. Discrepancy in third bill was found to be more than Rs.1.40 crore, the Committee probe revealed.

‘COMMISSIONER SHOULD BE COMPLAINANT’

During yesterday’s special MCC Council Meeting, B.V. Manjunath and Corporator M.U. Subbaiah urged the Mayor to send the Probe Committee report to the Govt. and demanded that the Commissioner herself lodge a complaint with the ACB as the case pertains to corruption. Being the executive head of the MCC, the Commissioner should be the complainant, they said.

Manjunath had also charged that the third-party inspection report had also been tampered with, resulting in the release of Rs.1 crore. He referred to a file pertaining to this case going missing and sought an inquiry into that. He also demanded the cancellation of licence issued to third party consultant CADD Station Solutions Pvt. Limited as without its knowledge, the misappropriation would not have taken place.

Corporator Satish said that there are chances of the officers getting away with the corruption case through recommendations and as such, ACB probe would be an appropriate one. Corporator M.V. Ramprasad said that a comprehensive probe must be initiated to all the works that have been undertaken during Dasara.

Corporators H.M. Shanthakumari, Ayub Khan, Prema Shankaregowda and Shivakumar said that it has been proved beyond doubt that the officials are involved in the scam in connivance with the contractor and third-party inspection team. The Probe Committee also came in for praises from Corporators for unearthing the truth.

The alleged irregularities related to the buying of Rafale Aircraft reverberated at the Council meeting with Congress Corporator Arif Hussain comparing the Rafale file being stolen from the Defence Ministry and the file that had details about the Double Billing Scam missing from the MCC office. “When the files can go missing in high security Ministry of Defence, it is no surprise that the files in MCC have gone missing,” he said in a mocking tone.

This, however, did not go down well with BJP Corporators who raised a hue and cry over dragging Rafale into MCC, which is no way related to it. They also sought a clarification in this regard from the MCC Commissioner Shilpa Nag whether the MCC Council is permitted to make references when the matter is being heard in Court.

War of words ensued between Congress and BJP Corporators with the former raising Rafale deal and the latter raising a string of corruption during UPA regime including 2G and other scams. Following this, Mayor Pushpalatha Jagannath directed Arif Hussain to stick to the subject.