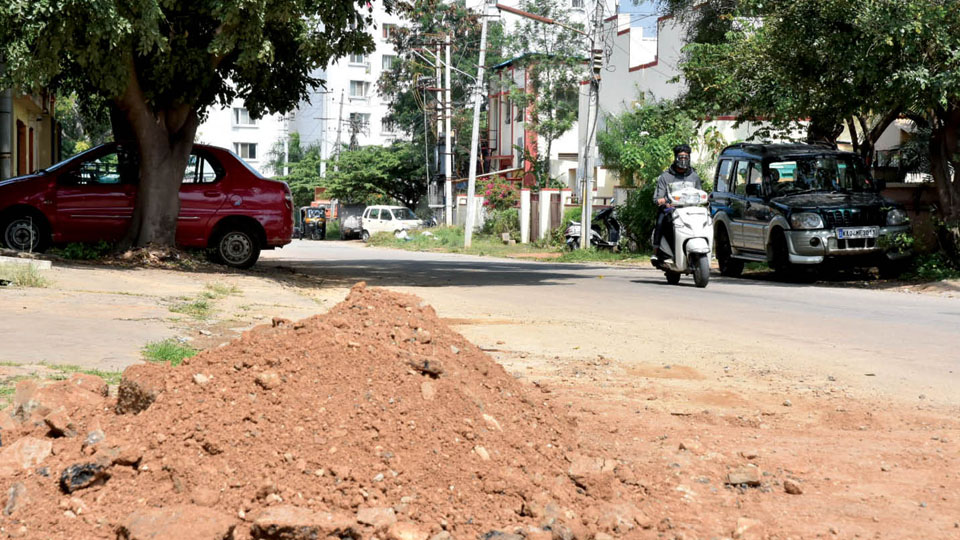 Mysuru: The Mysuru City Corporation (MCC) has taken a serious note of the public danger caused by cable-laying works across the city — 174.63 kilometres of city roads are being dug up by agencies attached to Reliance Jio Infocomm Ltd. (RJIL) to lay Optical Fibre Cables (OFC).

Star of Mysore had highlighted how the roads are being dug and not closed properly with mounds of stones and soil by the road sides. Two-wheelers faced the risk of tripping and falling while four-wheelers faced the danger of colliding with oncoming vehicles while avoiding the mess by the side of the roads.

Taking a serious note, Mayor Pushpalatha Jagannath and Deputy Mayor Shafi Ahmed conducted a meeting yesterday with the officials and engineers of RJIL and directed them to ensure that the roads, after digging and cable-laying, are closed in a proper way with jelly stones and asphalt.

She pointed out that while permitting the agencies to dig the roads, the MCC had imposed certain conditions to be followed while digging. Such directions must be stringently followed, the Mayor told the telecom company.

They were directed to contact the respective Zonal Engineers of Wards before taking up the digging work as the engineers will have knowledge about other cables line — Chamundeshwari Electricity Supply Company, Vani Vilas Water Works and MCC underground drainage pipelines. Damage must not be caused to any of these lines and in case of cable or pipe rupture, the telecom company is liable to restore the same to its original conditions and also bear the costs, the Mayor said.

Executive Engineer of Jio Cable Pradeep told the Mayor that enough precautions are being taken not to put public life in danger. Pits are closed immediately after the cables are laid and it requires at least three to four days to restore the roads back to their original shape, he informed the Mayor.

Pushpalatha Jagannath asked the MCC Zonal Engineers and officials to closely supervise the work so that roads and pavements are brought back to their originality.

On the ongoing pothole-filling exercise being undertaken across the city, the Mayor said that Rs.5 lakh has been released to each MCC Ward to fill potholes and anther Rs.10 lakh has been given to each Ward for development.

In all, each Ward will get Rs.16 lakh grant for pothole-filling and other development works in each Ward and in all, the MCC is spending Rs.9,75,00,000 for the overall development of all the 65 Wards, the Mayor informed.