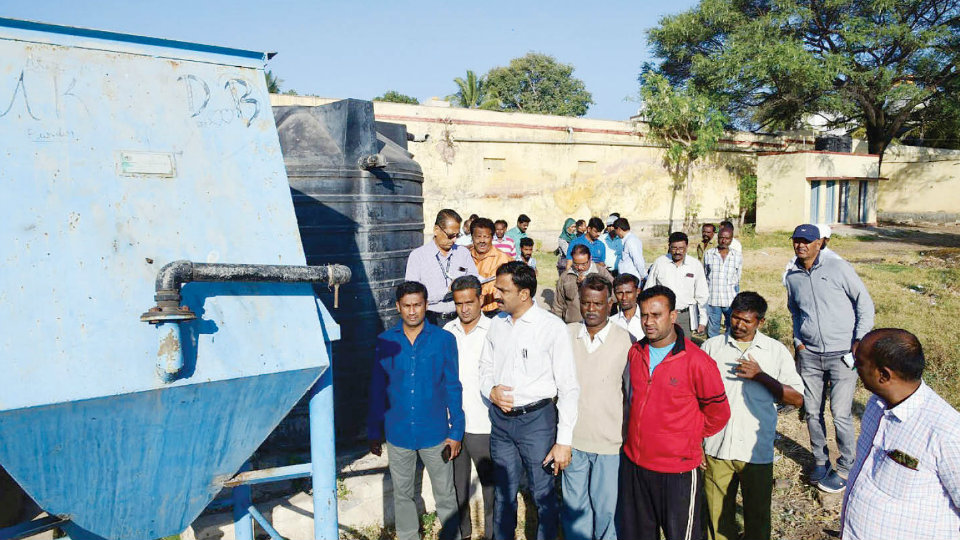 Mysuru: Drinking water dues have touched a whopping Rs. 162 crore in Mysuru city, and government departments and corporations are among the top defaulters, together owing Rs. 27.17 crore to Mysuru City Corporation (MCC), which has resolved to step up the drive to recover dues. Gram Panchayats owe Rs. 15 .

The MCC, unlike electricity supply companies, does not follow the system of disconnecting supply in case of non-payment of dues. This has resulted in a steep rise in water dues to the corporation, he said.

The civic body is targeting to recover all the dues by May this year. It has proposed a scheme of waiving interest on dues (subject to consent from the government). But the MCC has no plans of going for disconnection.

Mayor Pushpalatha Jagannath urged the residents to avoid wasting water for cleaning and washing floors. She added that caretakers of parks have been asked to use only borewell water for watering lawns and plants. She said residents can call the MCC helpline (0821-2411366) to report issues pertaining to water supply, including complaints against those wasting water.

She also announced that as a measure to increase the supply of water to the city, directions have been given to speed up the projects under Atal Mission for Rejuvenation and Urban Transformation (AMRUT) scheme. “We are in-stalling higher capacity pumps at Megalapura and Hongalli water treatment plant is being upgraded with new filter technology. This upgradation will give the city an extra of 40 MLD (Million Litres per Day) water,” said MCC commissioner.

According to him, the project being executed at Rs. 156 crore will be completed in a span of six months. Apart from this, MCC will repair its existing borewell network and add RO plants across the city. “Apart from transmission losses, the city loses a large quantity of water through theft. We are trying to regularise such connections with the help of an NGO through an incentive programme,” said Jagadeesha.

According to the MCC, 67 MLD is sourced from Melapura station and around 60 MLD from the Kabini project. The remaining is sourced from Hongalli 2nd Stage (32 MLD) and 3rd Stage (50 MLD), Belagola (45 MLD), and borewells (3 MLD).

The Commissioner said there was a loss of about 15% of water in transmission from source to distribution points. Besides, there have been cases of pilferage and leakage as well, which are being looked at. But the pumping stations can together pump 250 MLD.

Under the AMRUT scheme, a sum of Rs. 156 crore is being spent on boosting pumping capacity, deploying heavy–duty pumps, and relaying distribution pipes at the stations. Around 30 MLD more of water from Kabini and 13 MLD from Cauvery is expected, thanks to the project, he added.

“We are hoping to get the works done in the next three months, expediting the project,” the Commissioner said.

Sources said that if Karnataka Urban Water Supply and Drainage Board (KUWSDB) and the MCC involved in the implementation of the Hale Unduwadi Drinking Water Project fail to implement the scheme at the earliest, the city may face drinking water crisis by 2021.

Hale Unduwadi project aims at getting Cauvery water from KRS backwaters instead of the present practice of lifting water from the canals. The project is designed to take care of Mysuru’s water needs at least for 100 years.

In his Budget speech, Kumaraswamy announced that in order to permanently eradicate drinking water problem of Mysuru and 92 villages, Hale Unduwadi scheme will be implemented at an estimated cost of Rs. 540 crore. Once the project is implemented, the city and its neighbouring villages will get 300 MLD water from River Cauvery. This would be in addition to 250 MLD being supplied to the city at present.

The main hurdle for the project is the deadlock between the Karnataka Industrial Area Development Board (KIADB), Mysuru City Corporation (MCC), Mysuru Urban Development Authority (MUDA) and Karnataka Urban Water Supply and Drainage Board (KUWSDB) as the KIADB has sanctioned the land to a realtor and the government has to intervene and annul the allotment.

Recently, District Minister G.T. Devegowda asked the officials to take up the survey for Hale Unduwadi Drinking Water Project and resolve the deadlock.