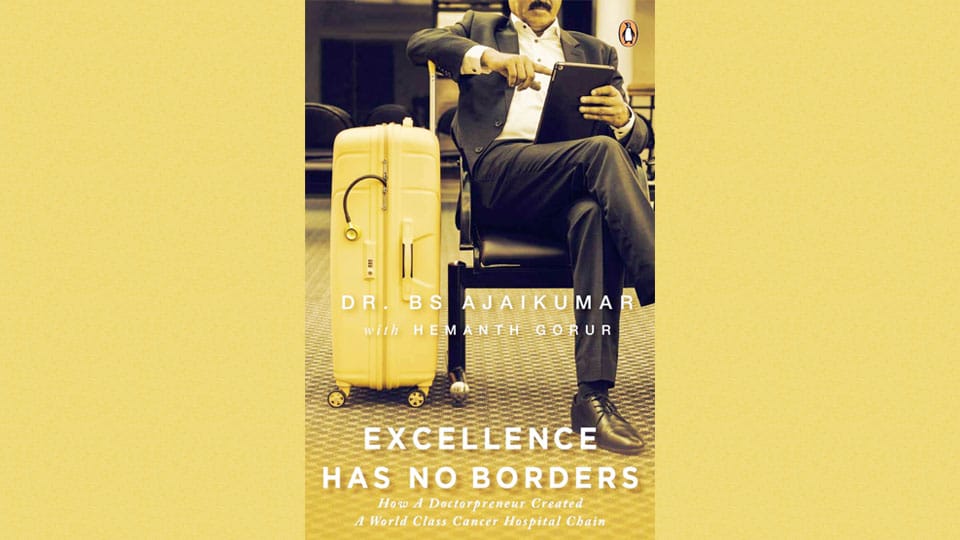 On Sunday, after watching Kannada TV channels showing the burial of Kannada film world’s iconic matinee idol Puneeth Rajkumar, who had died of heart attack on Friday (Oct. 29), I came to office to get rid of that melancholic feeling. Very sad indeed. He bloomed as an actor rather early in life as a child artiste and withered too early at age 46.

In the office, I finished reading the book “Excellence Has     No Borders” by Dr. B.S. Ajaikumar with Hemanth Gorur. Which means the actual writing was done by the latter. Star of Mysore had already published a review of this book by Dr. Bhamy V. Shenoy of Mysore Grahakara Parishat (MGP) that appeared on Oct. 26, 2021.

Dr. Shenoy wanted to know why the book was titled “Excellence Has No Borders.” After  reading the book, I too thought likewise. Dr. Ajaikumar was looking beyond the Indian horizon and venturing to establish a brand of hospitals for cancer patients worldwide and call it as Health Care Global, acronym HCG. After reading the book, I thought it was a misnomer to call his venture HCG for it would be perceived as a hospital of general healthcare and not exclusively dedicated to cancer. Which was why some of his venture capitalist financiers, as detailed in the book, had difficulty in getting to know one real character of the venture they were contemplating to finance. I felt he should have christened his healthcare brand (Hospitals) as Cancer Health Care Global (CHCG) or simply Cancer Care Global (CCG).

Since Dr. Bhamy Shenoy has reviewed the book comprehensively touching on important human and business aspects, including sibling suspicions, I will not inflict on my readers a second dose of comments on the same episode.

However, there are many lessons for the professionals like doctors who aspire to become entrepreneurs in their given area of specialisation — like Dr. Ajaikumar, who is a qualified Oncologist.

No doubt higher the risk in any business, higher the profit. So also the loss. When one bites more than one can chew and swallow, he is bound to choke and die. We have many cases of people, nay adventurers, venturing to achieve success that is beyond their reach and committing suicide. With humility and modesty, I say, health and wealth are the personal responsibility of each individual. Probably, it is because of this axiom there is a wise saying ‘Each for himself and God for all.’ Reading this book, I realised the truism of this human experience.

All along his ambitious journey, it is Dr. Ajaikumar who was taking responsibility for planning, finance, negotiating to find the venture capitalists and more. Naturally, much travelling he had to do. It seemed, most of the time he was in the airports flying to America and India any number of times.

I salute him for his high ambition, high-octane energy and above all courage to take a chance and risk. Of course, the whole world loves the winner, failure is an orphan. Dr. Ajaikumar, for now, is a winner and being a Mysurean, we must feel proud of him. I should vouch for his humane healthcare service to Mysureans and to the cancer patients from around Mysuru by establishing his first designated cancer hospital, known as ‘Bharath Cancer Hospital’ in Hebbal. It was a Godsend those days. Even now it is the hospital of the first call for poor cancer patients.

The book reveals how difficult it was for Dr. Ajaikumar to get a piece of land to set up this hospital.

In 1987, he thought of starting a cancer hospital in India. He decided to have it either in Bengaluru or Mysuru being a Mysurean. He knew  the well-known Prof. A.K. Ramanujam of the University of Chicago and on his suggestion went with him to meet the Karnataka Chief Minister, who was in Chicago, on some Government work. Sadly his suggestion was “laughed off.” Dr. Ajaikumar writes, “I was told they already had Kidwai for that and that there was no need for anything else.”

Reading Dr. Ajaikumar’s account of his trekking expedition to Kangchenjunga and his experience with his Sherpa-helper Aan Pasang who dies “suddenly” and the opinion about our life and death, I could not but remember our Kannada film actor Puneeth Rajkumar who passed away “suddenly” last Friday and how we felt devastated.

Dr. Ajaikumar and his wife Bhagya also go on a trip to rural and semi-rural areas across India. And from what he writes, it seems he got ‘enlightened’ like Buddha or Yudhisthira (Dharmaraya) in Mahabharata. He remembers the incident with Aan Pasang that had taught him the life lesson about how suddenly things could change and how one needed to be prepared. ‘One day you were here and the next day you were gone.’ He then recalls one of the many questions the Yaksha asks Yudhisthira in  Mahabharata known as ‘Yaksha Prashne’.

Question: What is most amazing in the world?

Answer: Every day people die, yet everyone thinks he will live for ever. What is more amazing than this?

“Human life has a self-life. It derives meaning from accomplishments achieved during one’s lifetime. For this good health is crucial. For, anything can be bought or repaired with money, but there is only so much money can do when it comes to health.” What a profound observation!

Like a sting in the tail, the last paragraph of the last chapter of the book says, “There should be no difference in TREATMENT for the rich and the poor” and advises the (deaf, dumb and blind) government what it should do to reach this goal. It should not be like in our country ‘Bail for the rich and jail for the poor.’ Did you get me Steve?

Indeed, as Dr. Bhamy Shenoy said, “It was an easy reading book while being a page turner.”