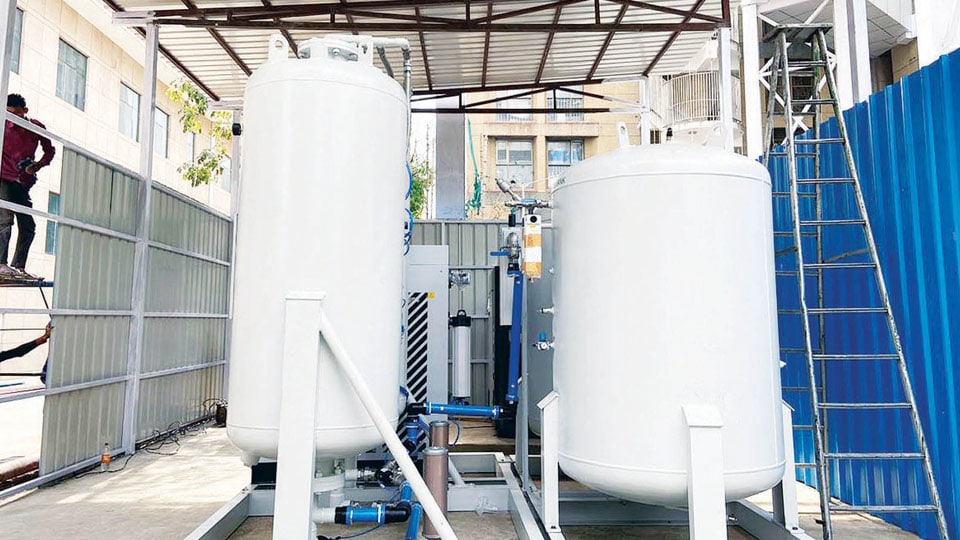 DRDO to set up oxygen plant in Mysuru by June 30

Mysore/Mysuru: The Defence Research and Development Organisation (DRDO) will set up an oxygen producing plant in Mysuru and the facility will be operational by June 30. Mysuru does not have an oxygen manufacturing plant and the five refilling plants depend on other oxygen-producing plants in the State, to meet day-to-day demand.

The DRDO is setting up 500 Liquid Medical Oxygen plants across India and Karnataka has got seven. The entire project is sponsored by PM-CARES Fund. The oxygen plant has a flow rate of 1,000 litres per minute and can cater to 190 patients at a time.

The Ministry of Defence said that the medical oxygen plant technology, based on the on-board oxygen generation for Light Combat Aircraft Tejas, has been developed by the DRDO. The technology used for the plant is Pressure Swing Adsorption process.

The National Highways Authority of India (NHAI) is preparing the site and implementing the project in coordination with the respective District Administrations. In Mysuru, the earlier plan to set up the oxygen plant was in K.R. Hospital premises but Mysuru-Kodagu MP Pratap Simha has conveyed to the NHAI that it is better to set up the plant in the District Hospital that is now a designated COVID-19 Hospital.

Either K.R. Hospital or District Hospital

NHAI Project Director B.T. Sridhara has written to Mysuru Deputy Commissioner Rohini Sindhuri yesterday to finalise the plant location either in K.R. Hospital or District Hospital premises in coordination with the MP, District Health Officer and the Dean and Director of Mysore Medical College and Research Institute. The letter also mentions that the plant has to be set up and operational by June 26 this year.

Speaking to reporters at his office in city yesterday, Pratap Simha said that the K.R. Hospital already has a 13 Kilo Litre oxygen tank. “The DRDO is setting up oxygen manufacturing plant. We are discussing the suitable place to establish it where it will be more useful to the people. It will be either K.R. Hospital or District Hospital. The plant is expected to come to Mysuru by June 15,” he said.

He also said that the Builders Association of India (BAI), Mysuru, is donating an oxygen plant to Seth Mohandas Tulsidas Memorial Hospital that can produce and supply 160 litres oxygen per minute. This donation will be made next week and the administration has plans to set up oxygen plants in all Taluk headquarters, MP Pratap  Simha added.

The National Highways Authority of India has been entrusted with the responsibility of keeping the ground work —  like identification of site close to hospital wards and availability of power supply — ready for taking up civil and electrical works.

It has to check the oxygen pipeline system in the wards and ensure that the line is extended up to the oxygen plant. The line must be kept ready for receiving supply for testing and commissioning operations. Two technical persons from each hospital will be appointed and they will be made responsible for operation and upkeep of the plant, the NHAI communiqué said.