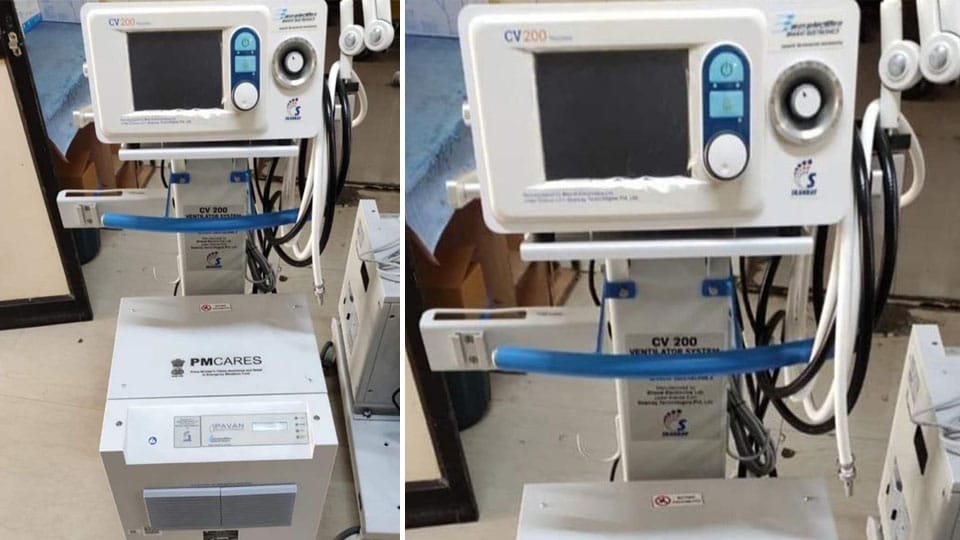 30,000 ventilators to be available by August in a corruption-free initiative

Mysore/Mysuru: In his recent address to Chief Ministers of all States, Prime Minister Narendra Modi said that 30,000 ventilators funded by PM-CARES will arrive by August 2020. In May, Rs. 2,000 crore was allotted from the Fund for procuring 50,000 ventilators. This will double the number of ventilators in the country and help save lives of COVID-19 patients, the PM had said.

Behind the Prime Minister’s announcement is the efforts and initiatives taken by Mysuru-based Skanray Technologies that has started delivering ventilators built under its licence by Bharat Electronics Limited (BEL). The project is being funded by the PM-CARES Fund. The ventilators will be delivered to the Government and 30,000 of them will be delivered by August.

Skanray Technologies is a global exporter of ventilators. Its Founder and Managing Director Vishwaprasad Alva told ‘Star of Mysore’ this morning that of the 30,000 ventilators, 1,200 will be available for Karnataka.

Alva said, “30,000 units of Skanray’s CV200 advanced ICU ventilators are being manufactured at Bharat Electronics Limited (BEL) for the Government of India of which a few thousand have already been delivered and the entire 30,000 is targeted to be delivered by August.”

“For the first time, this is a Government-to-Government arrangement where State-owned BEL is supplying ventilators to the Centre. Skanray Technologies is transferring the design and product manufacturing technology. It is also supporting BEL to indigenise some critical components that have been imported for them to be used locally along with our own components. We are also helping with some software features and design upgrades along with Defence Research and Development Organisation (DRDO) scientists,” he added.

“While the BEL is manufacturing CV200 ventilators under licence from Skanray Technologies using our technological expertise and training, their quality, monitoring and assessment are our responsibility. Already 10,000 ventilators are ready,” Vishwaprasad Alva revealed.

The ventilators are competitively priced considering its configuration, features and performance. All the BEL’s ventilators bear the PM-CARES logo to ensure traceability and accountability, as it is being procured under this Fund. This has been tweeted by Chairman and Managing Director M.V. Gowtama and according to him, the CV200 is a high-end ventilator.

Also, the Prime Minister’s Office (PMO), instead of asking private firms to manufacture and supply ventilators, has asked the State-owned BEL to manufacture the much-needed ventilators and the PMO is monitoring every step of the process,” he added.

Skanray is India’s only ICU ventilator exporter of modern medical equipment and has its installations in about 80 countries around the world and with over 50 products, it is an Original Equipment Manufacturer to large global med-tech companies.