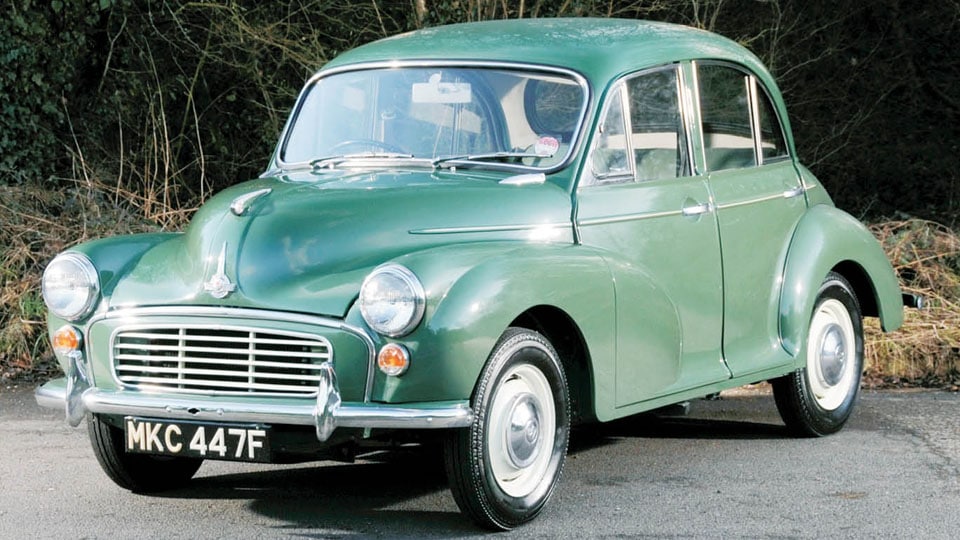 Driving in Mysore-Mysuru: Then & Now

Our lessons began on Valmiki Road, shaded by rain trees, where traffic was sparse. We would drive slowly up to the Mosque at the end of the road, turn round and drive back. Father insisted that I practise hand signals as I drove. At that time the fashion was to wear glass bangles; my signalling became a glittering, tinkling affair. So father banned the bangles.

Saudi Arabia was recently reported to have permitted the women of the country to drive cars. An Arab woman, burqa-clad, eyes covered by dark glasses, was shown on TV driving while other motorists gave her a “Thumbs Up” salutation to her new-found liberty. Some reports say it may take a while to implement the rule.

I remember learning to drive in Mysore in 1955. My father, M. Venkatesh, had sold his vintage Standard car with the “Stepney” tyre mounted on the back for Rs.1,000 and had bought a 1950’s Morris Minor in green for Rs.5,000. He refused my request to teach me driving as I was only 17-years-old. My mother Mukta argued that in our custom, I was considered to be in my eighteenth year after turning seventeen. So he gave in. 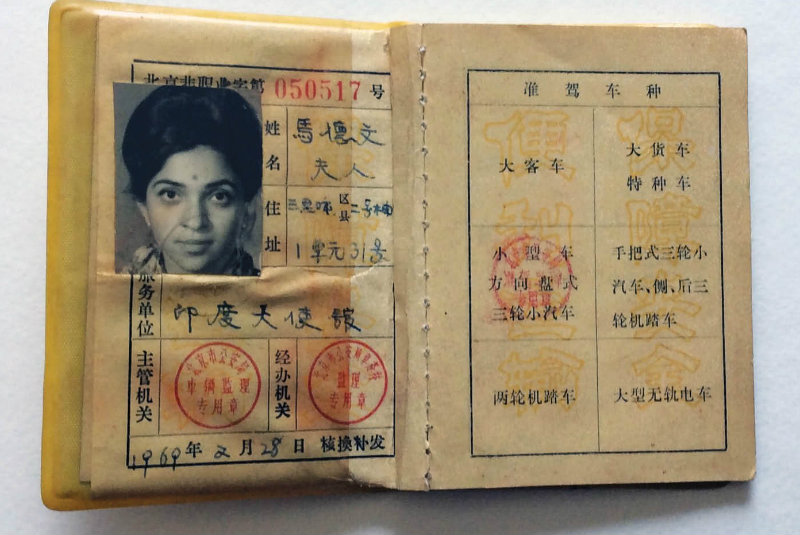 Our lessons began on Valmiki Road, shaded by rain trees, where traffic was sparse. We would drive slowly up to the Mosque with the tiled outhouse at the end of the road, turn round and drive back. Father insisted that I practise hand signals as I drove. A right turn was denoted by extending the arm out of the window and pointing right. The left was more difficult, the hand making semi-circular movements towards the left. An onward wave indicated that the car behind could overtake. A quick up-and-down sign of the extended arm meant slowing down, the arm held up, palm upstretched, indicated “Stop.” At that time in Mysore the fashion was to wear many glass bangles; my signalling became a glittering, tinkling affair. So father banned the bangles.

Once a flock of goats crossed the road. Instead of the brake I pressed the accelerator, the bleating goats scattering before us. Father, shooing away the animals with his right hand and pressing an imaginary brake-pedal with his foot, shouted “Brake! Brake!” No goats were hurt and we drove away as the goat-herd finally appeared, shaking his stick at us.

READ ALSO  Double-decker buses from Mysuru to Bengaluru on cards

Our practice moved to Princess Road. From Cheluvamba Park, we drove past Akashavani to the Jewel Filters [now called Vani Vilas Water works]. The return journey took us past the old statue of the Elephant at the head of Cheluvamba Park and the Vivekananda Memorial. It is still there, unchanged. One day, at that point, a Royal Enfield motorcycle, known as “Bullet,” drew up alongside, the khaki- clad rider flagging us down. It was Sergeant Kuttappa, an upright, strict Police Officer, respected and feared in Mysore. He advised my father to get me a Learner’s licence so that I did not drive without authorisation. Chastened, my father agreed. Later on, when we sometimes passed him on the road, he would give us a half smile. These driving lessons came in handy the next year when my father suffered a heart attack and I was able to drive him to the hospital for treatment. 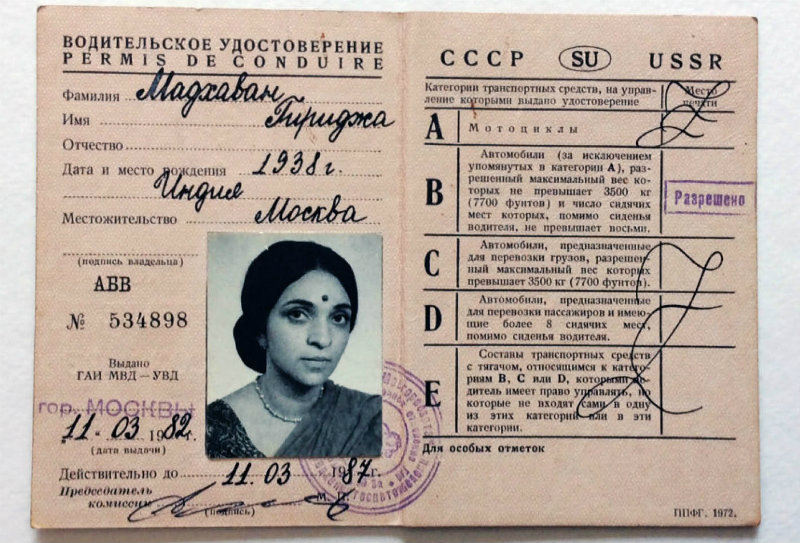 Girija’s licence of 1982 issued in Moscow.

I took my hard-won Indian licence with me when my husband A. Madhavan was posted to Indian Embassies abroad, using it as ID to obtain local ones. In 1968, we went to Beijing [called Peking then] in the Peoples’ Republic of China. The country was in the throes of Chairman Mao’s Great Proletarian Cultural Revolution. Sino-Indian relations were tense and Indian diplomats had been man-handled, the Embassy besieged. By an oversight, I had allowed my Indian licence to lapse earlier. The Chinese authorities insisted I should take their driving test to get a Chinese licence.

I reported to the Traffic Police the next day in our personal car and was taken to an open clearing where, on the mud, two abutting rectangles were marked in chalk, each a few feet bigger than the car. The test was to shift the car from one oblong to the next in four moves without crossing the outer borders. This was the test that taxi drivers in Beijing had to take! I failed the test.

However, a search of our papers turned up a Swiss licence from an earlier post which still was valid. It was reluctantly accepted and I got my Chinese licence. Roads in Beijing then were dominated by bicycles, riders wearing blue boiler suits as well as a few official cars, taxis, pedicabs and horse-drawn carts with a little donkey alongside.  Any accident involving foreigners invited the wrath of the Red Guards [revolutionary youth] who would “struggle against” erring drivers.

A car ride I remember to this day was in Moscow in November 1982. Solemn music on the radio gave a hint of the death of the Soviet leader, Leonid Brezhnev. Among the dignitaries at the Kremlin funeral was Prime Minister Indira Gandhi. The staff car sent for my husband to go to Sheremetyevo Airport broke down. So we had to go there in our own small car. At the airport, flashing lights on the tarmac showed that the Indian Prime Minister was being ushered into a Zil limousine directly from the aircraft and a line of cars was already setting off. Our diplomatic number plate permitted us to join the convoy. Headed by escort Police, the black limousines headed for the Dacha [guest house] where she was to stay. We tailed them in our dusty car, finding the rapid pace hard to maintain. Later I was told that someone appealed to a Russian driver to slacken speed to let me to keep pace. The answer was a curt “Nyet! If she joins a convoy she has to keep pace!”  We made it and Madhavan was on time to be in the receiving line. He even saw Fidel Castro, also a guest at the Dacha!

Now my daily challenge is to negotiate the octopus circle at Cheluvamba Park where seven roads criss-cross; almost as difficult as the driving test in Beijing! The traffic lights stay switched off. There is no “Right of way,” might is right, the more daring drivers get across. I feel unnerved when vehicles behind me keep honking, urging me to move forward just as buses pass in front; or when someone cuts across our car from the left to go right. My hand signals now are changing: I point to the traffic streaming ahead and mime my inability to proceed. I hope I do not end up shaking my fist as a new signal !

Girija Madhavan Mysore Memories Mysuru
Who is a people’s leader, asks BJP: Both Modi and Siddu, say the temple!
13 members of a marriage party killed in accident near Maddur

8 COMMENTS ON THIS POST To “Driving in Mysore-Mysuru: Then & Now”