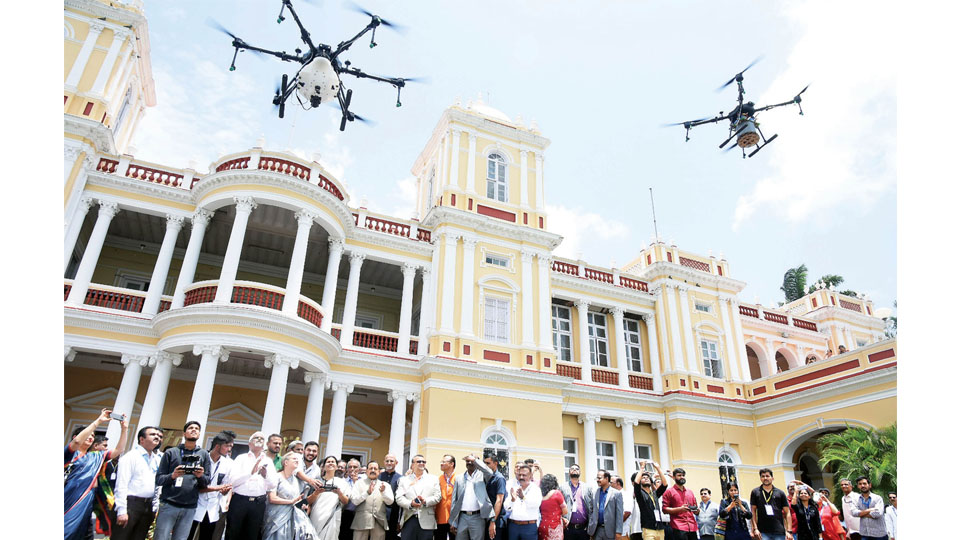 Drone Demo: Crowds at CFTRI witness use of drones in farm operations

Mysore/Mysuru: A demonstration of drones in agriculture and farm operations was held in city this morning where the crowds witnessed their uses to save money, time and labour.

The game-changer display was held on the second day of the third edition of three-day conclave TechBharat-2022 that began at the Council of Scientific and Industrial Research (CSIR)-Central Food Technological Research Institute (CFTRI).

The mega event was inaugurated yesterday and it is being organised by the IMS Foundation and Laghu Udyog Bharati – Karnataka Chapter in collaboration with CSIR-CFTRI.

Union Minister of State for Science and Technology and Earth Science Jitendra Singh and Minister of State for Agriculture and Farmers’ Welfare Shobha Karandlaje operated the drones to open the demonstration to the public. Dr. Sridevi Annapurna Singh, Director of CSIR-CFTRI and others were present.

The two drones, NAL Octa-Med and NAL Octa-Agri, have been designed by CSIR-National Aerospace Laboratories (NAL), Bengaluru, are called Drone-based vaccine/ emergency medicine deliveries and have a payload of 10 kgs and 20 kgs. They have a maximum flying speed of 30 km and 36 km per hour and a maximum range of 20 km. They have a maximum launch altitude of 3 km and an operational altitude of less than 500 mts AGL.

Pesticides and liquid manure were sprayed from the drones on plants at CFTRI garden in front of the main building as part of the demonstration. Progressive farmers and entrepreneurs attending the event were told that the drone can spray 10 acres of agricultural or horticultural land in just 20 minutes saving money, time and labour. Each drone costs Rs. 4.5 lakh and it is a one-time investment.

The NAL drones were used in Jammu & Kashmir for dropping medicines. Farmers can get these drones on rent to assess their crops and they can improve returns from their farm produce. Apart from the demo, a technical session on drone tech and an exhibition of drones used in farm operations has been organised where interested parties can interact with manufacturers.