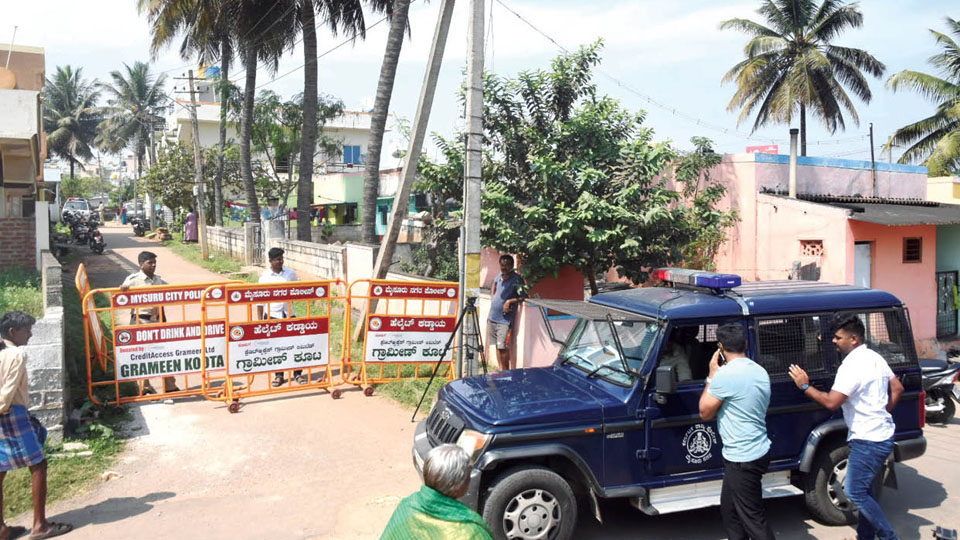 Mysore/Mysuru: A five-member team from the National Investigation Agency (NIA) has landed in Mysuru this morning to investigate the antecedents, contacts, place of residence and the places visited by the prime suspect in the Mangaluru cooker bomb blast case where the Improvised Explosive Device (IED) exploded in an autorickshaw on Saturday last.

The suspect, now identified as Mohammed Shariq, 24, is an accused in two separate unlawful activities cases in Karnataka since 2020. He has suffered 40 percent burns in the blast and is wanted in a terror case registered in Shivamogga, in September this year, for alleged links to the Islamic State (ISIS) and was arrested in 2020 for painting anti-national graffitis on a wall in Mangaluru, Police said.

The NIA and Karnataka Police have been looking for him. Shariq had rented a room at Lokanayakanagar near Metagalli by providing a fake identity and reportedly told the owner of the house that he was in the Mysuru city for ‘mobile repair training’ at a shop in Agrahara. He had stolen the identity of a Railway employee named Premraj Hutagi, a resident of Hubballi. Hutagi said that he had lost his Aadhaar card twice in the last two years.

The NIA team is collecting information from the Police who conducted mahazar at the Lokanayakanagar house yesterday. Information is being gathered from the forensic team who collected vital clues.

Police, Bomb Disposal Squad and forensic teams raided the room yesterday and found explosive materials, the quantum and details of which the Police are still tight-lipped about. The ground floor room had incriminating materials such as explosives and circuits used in bombs, sources said.

They added that the room was rented out to Shariq for a monthly rent of Rs. 1,800 and after taking the room, he travelled extensively to Tamil Nadu and on the day of the blast, he came to Mangaluru from Mysuru.

Based on the leads, three persons have already been arrested in Mangaluru and one more person having links to Shariq from T. Narasipur is being interrogated. The contact from T. Narasipur is said to have supplied Shariq over 10 mobile phones for just Rs. 500 to Rs. 1,000.

Police said that the mobile number Shariq was using was procured in Tamil Nadu using another set of fake documents. The mobile tower dump analysis shows Shariq has travelled extensively in Tamil Nadu over the last several months.

As the news spread about Shariq staying in a rented room where bomb-making materials were recovered, City Police activated the intelligence network and each Police Station has been given the task of collecting information about new tenants who took houses on rent, especially in secluded areas far from the eyes of Police and public.

Teams are visiting houses that have been given on rent and the owners are being asked to collect authentic information from the people seeking accommodations. People who take rooms for short terms are under scanner and the Special Branch officers of each Police Station have been tasked with reactivating their informant networks.

Directions have also been given to hoteliers to be strict and more vigilant with regard to the identity verification of their guests and to share the information with Police regularly. Police have been asked to monitor CCTV footages on the movement of people in residential areas and to keep a close vigil on the movement of suspicious people at all transit, exit points including Railway Station, Bus Stand and major religious places.