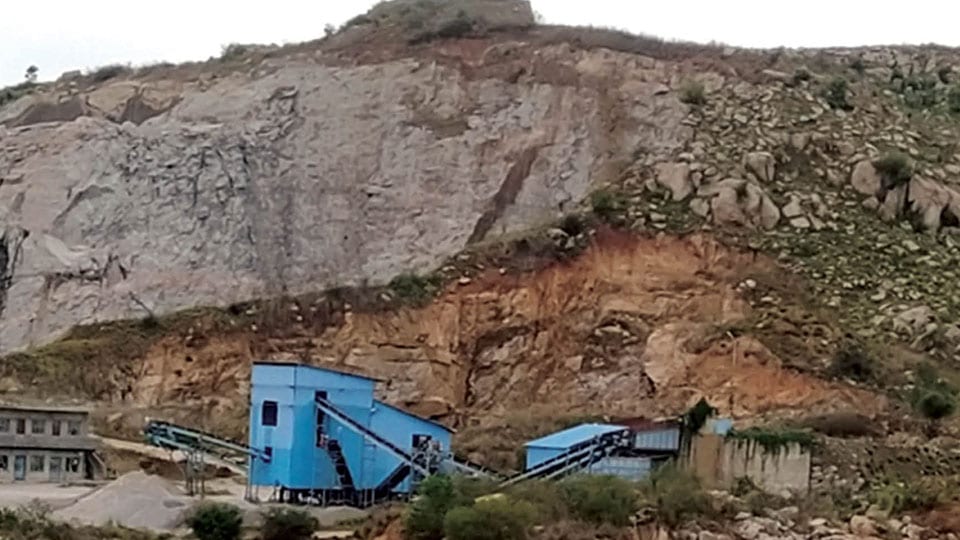 Mandya: The Mandya District Mining Task Force headed by Deputy Commissioner S. Aswathi and the District Stone Crushers’ Regulation Committee have issued orders cancelling the licences of 11 quarries that were operating without an environment clearance certificate and 22 crushing units for violation of norms.

The decision comes close on the heels of Mandya MP Sumalatha Ambarish pressing for a high-level probe by a Central agency like the CBI to unearth illegal quarrying in the District that has threatened the safety of Krishna Raja Sagar (KRS) Dam.

Sumalatha has been meeting the highest level leaders in New Delhi urging for impartial scientific investigation by the Central agency and she has mentioned in her memorandums that political-criminal-official nexus is behind the mining activities. The licences of 33 crushing units operating in close proximity to KRS have now been revoked.

The Task Force and the Regulation Committee met on July 28 where it was decided to cancel the lease contracts of 11 quarries that failed to produce environment clearance. The cancellation came into effect on July 31.

According to the order, permits of seven crushing units, coming within 100 metres of the main road at Baby Betta Kaval in Pandavapura (close proximity to KRS) violating the safety zone as per Karnataka Stone Crusher Act 2011 have been revoked.

Also, licences of 22 crushers (Form C) which were operating on the basis of a document with the signature of a scientist of the Mines and Geology Department have also been cancelled.

READ ALSO  Will illegal mining come to an end in Mandya district?

But local residents, green groups and farmers have expressed doubts on this step by the administration. “These steps are only announced through the media but never implemented. It is business as usual after a few weeks and there is no monitoring on a continuous basis,” said an environmental activist.

Illegal quarrying and mining is controlled by political leaders and include both the past and present MLAs, cutting across parties and revenue is the mainstay. Hence they get away easily, he reasoned.

Speaking to Star of Mysore, Senior Scientist of Mines and Geology Department Padmaja said that 12 cases have been filed in the Courts at Mandya with regard to illegal mining, stocks and transport. “Many more cases are in the process of being filed. From April 2021 till date Rs. 33.73 lakh penalty has been collected from 119 trucks for illegal transport of mined stones,” she said.

The Mining Task Force Crushers’ Regulation Committee has also resolved to constitute a mobile squad to operate in Pandavapura, Srirangapatna and Nagamangala taluks of Mandya District to check illegal mining.

The squad will comprise personnel from Revenue, Forest, Panchayat, Police and officials from the Department of Mines and Geology. 11 new check-posts have been established across Mandya to monitor illegal transportation of stones and materials from quarries and mines.

Based on complaints by public, many places in the district have been identified as hotspots of illegal mining and declared as sensitive areas. There will be extra vigil by mobile squad personnel and the Task Force will closely monitor these areas.