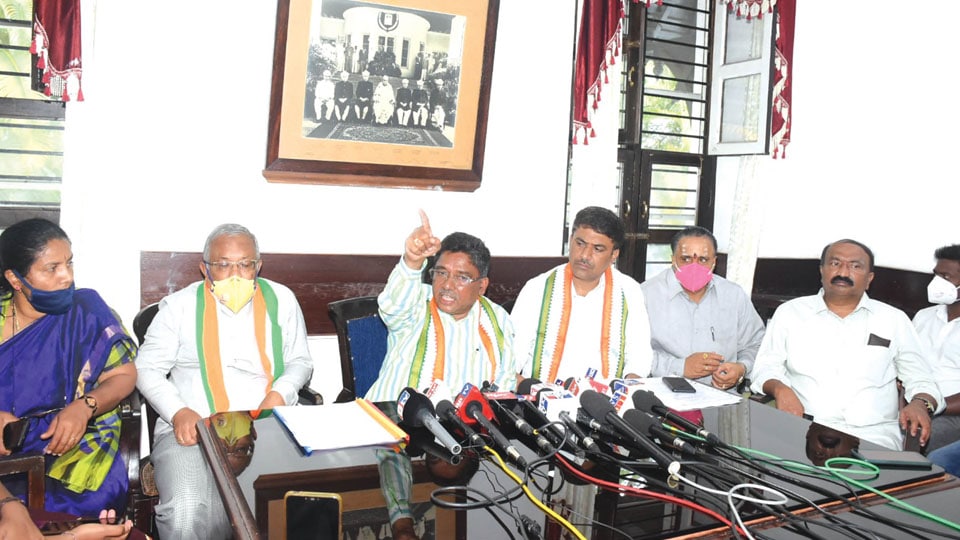 Mysore/Mysuru: Former MP and KPCC Spokesperson V.S. Ugrappa has accused both the State and the Union Governments of turning a blind eye to the problems of people due to unprecedented floods and steep rise in Corona positive cases.

Addressing a news conference here yesterday, he said that no relief work has begun even after Chief Minister Basavaraj Bommai visited the flood-hit areas. The Union Government has shown a step-motherly attitude towards the State. While Prime Minister Narendra Modi did the aerial survey to take stock of floods in Gujarat, he did not do it when the floods hit Karnataka. When B.S. Yediyurappa was the Chief Minister in 2009, the then Leader of Opposition in the State Legislative Assembly Siddharamaiah had requested the then PM Dr. Manmohan Singh to visit the flood-hit areas in Karnataka and also got crores of rupees as relief released from Government of India. But the present situation was totally contrasting.

Ugrappa said the BJP had criticised the Congress Party for its ‘High Command culture’ and ‘cover culture’ in the selection of CM and the Ministers. The same culture was now seen in BJP with PM Modi and Home Minister Amit Shah calling the shots in finalising the list of Karnataka Ministers. The selection of Ministers was the prerogative of the CM and if this power was snatched away by the BJP High Command, it will show that saffron party did not have faith on the Constitution and Democracy.

MLC A.H. Vishwanath and MLA Basangouda Patil Yatnal who were vocal criticisers of Chief Minister B.S. Yediyurappa in the last four months, have become ‘Mouni Babas’ after Basavaraj Bommai became the CM. The duo had accused Yediyurappa and his family of receiving kickbacks, but the Central investigation agencies did not take it seriously. Are Vishwanath and Yatnal still stuck to their statements?