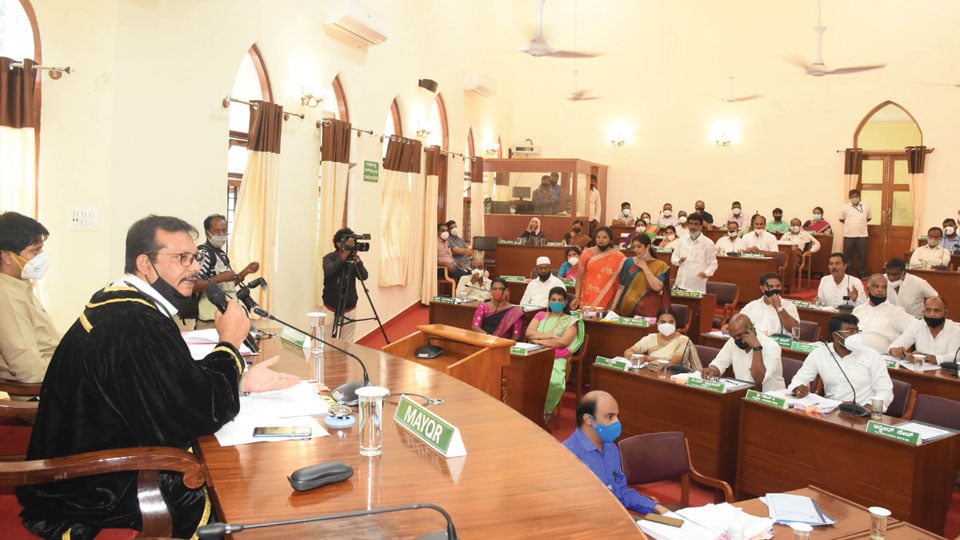 Mysore/Mysuru: Instead of its regular business-as-usual meetings, the Mysuru City Corporation (MCC) Council yesterday debated lack of vaccine availability in Mysuru and this led to heated exchanges between BJP, Congress and JD(S) Corporators.

While the BJP was accused of favouritism in the constituencies ruled by the party MLAs where only select groups are given preference, the Congress and JD(S) Corporators were accused by the BJP of hiding facts and furthering their political agenda in the name of vaccines.

As soon as the meeting began under the leadership of Deputy Mayor Anwar Baig, who is also the Acting Mayor, Corporators raised the issue of vaccine shortage. The issue was raised before the meeting agenda was placed before the Council. Congress members H.M. Shanthakumari and Pushpalatha Jagannath demanded the presence of the District Health Officer in the meeting as requested earlier to seek clarifications on certain aspects.

Responding to this, MCC Commissioner Lakshmikantha Reddy said that the DHO was busy in another meeting and as such he has sent a representative to the MCC meeting.

JD(S) Corporators Prema Shankaregowda and SBM Manju, Congress Corporators Ayub Khan, Arif Hussain, Gopi, Shoba Sunil and others alleged that due to vaccine shortage, people are being turned away from the vaccination booths.

Taking objection to the vaccination campaigns launched by BJP MLAs in their respective constituencies where party loyalists and voters are given jabs on preference, all the non-BJP Corporators alleged that the MLAs were behaving as if vaccines are their property.

READ ALSO  BJP set to sweep UP after 15 years

“Every day over 500 tokens are issued to the common man and poor and they leave their daily wage work and come to the booths where only 100 jabs are administered. The entire day’s earnings are wasted as they are told to return the next day,” Corporators alleged.

They also objected to the use of MLAs’ photos and banners at the vaccination booths.

Countering the charge, BJP Corporators said that the MLAs were responsible for the voters of their constituency. “The MLAs are doing their job well and what are your responsibilities as Corporators,” questioned M.V. Ramprasad.

BJP Corporators Shivakumar, B.V. Manjunath, M.U. Subbaiah accused the Congress and JD(S) for launching a smear campaign when the vaccines were invented and now are demanding the same vaccine.

“Your party leaders branded the Indian vaccines as BJP vaccines and now you want the same vaccines? Because of the smear campaign launched by your party leaders from the national and local level, vaccine hesitancy has developed,” they alleged.

Responding to the vaccine shortage,  MCC Commissioner Lakshmikantha Reddy said that till June 21, 50 percent of the vaccines were supplied both by State and Centre and now the entire stocks are being supplied by the Centre.

Following complaints that vaccine share has been wrongly allotted to certain Assembly segments at the cost of other constituencies, the Deputy Commissioner has ordered equitable distribution of doses to all 11 constituencies, he clarified.  Since then, all areas are getting equal supplies, he said.

The Commissioner announced that he would bring to the notice of the DC about the concerns raised by the Council and take measures to address them.