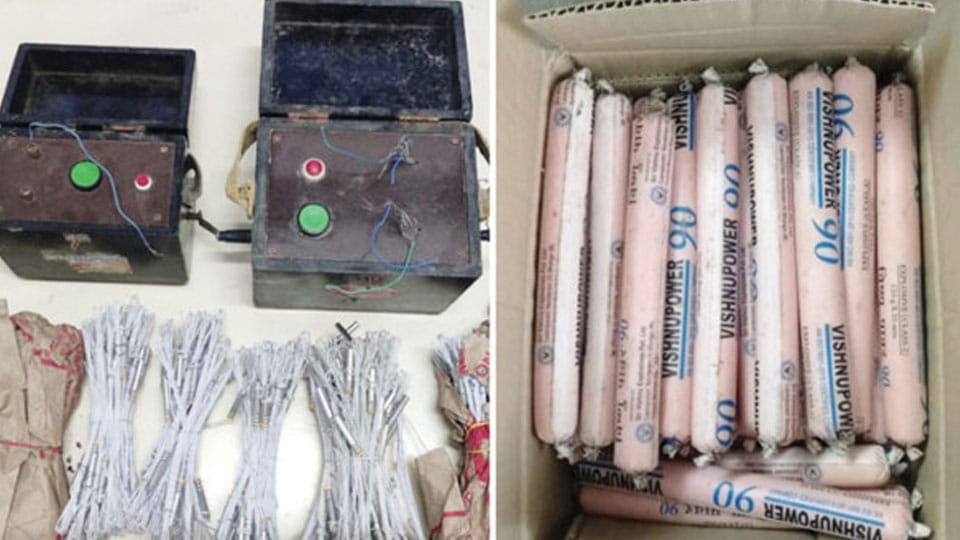 Mandya: Close on the heels of a blast at a stone quarry caused by a truckload of gelatine in Shivamogga district in which six people died last week, the Mandya District Administration has seized explosives and seized vehicles used for quarrying.

Residents in several parts of Mandya, particularly around the Krishna Raja Sagar (KRS) Dam, had voiced concerns about illegal quarrying in their areas and nothing concrete had been done so far to end illegal quarrying.

The raids and seizure of explosives came after Mandya DC M.V. Venkatesh visited Baby Betta on Friday. After the DC’s visit, teams of Taluk Administration officials and the Police inspected illegal stone crushers in different parts of Nagamangala and Srirangapatna on Saturday.

Most of the villages are within a radius of 4-8 kms of the KRS Dam and stand on the same rocky platform as the Reservoir. The quarries use high-intensity explosives to break the rocks and this has been causing the earth to shake due to impact. Some of these quarries are operating illegally in the reserve forests.

Superintendent of Police K. Parashuram said that inspection of stone-crushing units will continue over the next few days. A few vehicles were seized in Baby Betta when the Police raided the place recently. Officials of the Taluk Administration, Department of Mines and Geology and the Police are keeping an eye on mining activity in the district to check illegal quarrying, the SP added.

Mandya MP Sumalatha Ambarish tweeted that the incident in Shivamogga was a warning to residents in Mandya. “The Administration and Police in Mandya have initiated action against illegal mining. I have constantly pursued efforts at curbing them and voiced my concern in Parliament also,” she tweeted.

“Most times it is unfortunately done in connivance with local politicians and a few corrupt Government authorities. I urge the Government to take immediate action and give strict instructions to all District Administration officials to take action  against all illegal mining activities,” she tweeted.