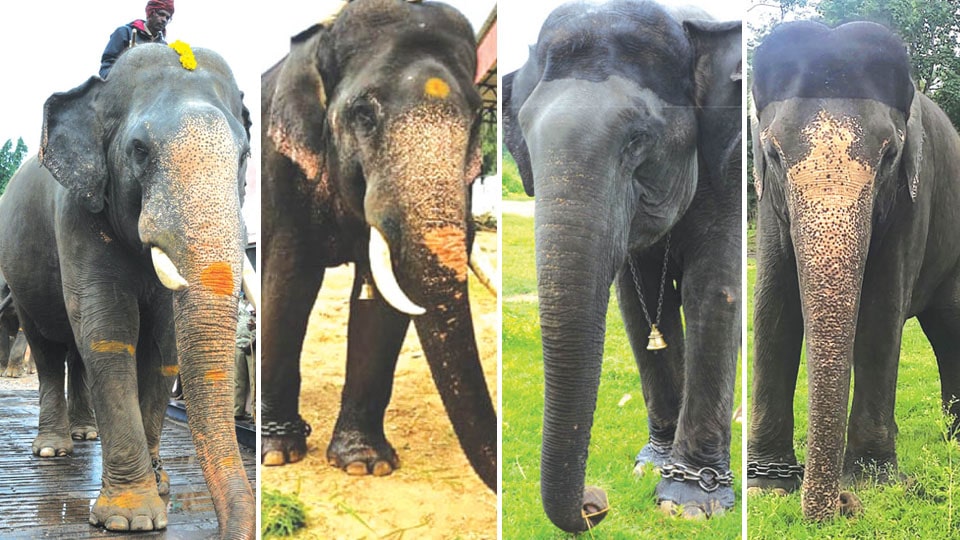 Dasara procession limited to Mysore Palace premises this year too

Mysore/Mysuru: A total of eight elephants (3 female and 5 male) will be participating in this year’s Dasara celebrations in Mysuru and the grand finale ‘Jumboo Savari’ is limited only inside the Palace premises this year too, following COVID pandemic.

The eight elephants which will be participating in this year’s Dasara are: Abhimanyu, Gopalaswamy, Dhananjaya, Vikrama, Ashwathama, Kaveri, Chaitra and Lakshmi.

Housed in Mathigodu Elephant Camp, Abhimanyu, nicknamed as ‘Fearless’ had carried the 750-kg Golden Howdah for the first time last year and has been given the same responsibility this year too.

Abhimanyu, who was captured at Hebballa Forest area in Kodagu district in 1970, has a special ability to capture wild elephants and help Forest staff during taming them and providing treatment. He has taken part during operations and has been successful in capturing 140-150 wild elephants and 40-50 tigers. He also has the ability to know for what operation he is being taken and prepares himself for it.

Aged 38 years, Gopalaswamy was captured at Yethur of Sakleshpur in Hassan district in 2009 and housed in Mathigodu Elephant Camp. He is involved in operations to capture wild elephants and tigers and has been participating in Mysuru Dasara since 2012. He is 2.85 mts. tall, 3.42 mts. long and weighs 4,420 kg. J.D. Manju is his Mahout and Srujan his Kavadi.

The 44-year-old female elephant was captured at Adinaduru Forest Area in Somwarpet, Kodagu, in 2009 and has been participating in Dasara since nine years.

Housed in Dubare Elephant Camp, Kaveri is 2.60 mts tall, 3.32 mts long and weighs 3,220 kg. While J.K. Dobi is her Mahout, J.V. Ranjan is the Kavadi. She has been participating as a Kumki elephant in ‘Jumboo Savari.’

This 20-year-old female elephant, which was separated from its herd, was being taken care at the Department’s elephant camp and now housed in Rampura Elephant Camp.  Lakshmi  is being used to capture wild elephants and tigers and has been participating in Dasara since 2019. She is 2.32 mts tall, 2.60 mts long and weighs 2,540 kg. J.H. Chandra is the Mahout and H.A. Lava the Kavadi.

Captured in Yasalur Zone in Hassan district in 2013, 43-year-old Dhananjaya is housed in Dubare Elephant Camp and is also involved in capturing wild elephants and tigers. He has been participating in Dasara since three years.

The 48-year-old female elephant, which is now housed in Rampura Elephant camp, is the daughter of Gange in the Forest Department’s camp. Chaitra is involved in operation to capture wild elephants and tigers and is participating in Dasara since 2018. She is 2.30 mts tall, 3.10 mts long and weighs 2,600 kg. Bhoja is her Mahout and Kaleem Pasha is the Kavadi.

Captured at Doddabetta Forest area in 1990, 58-year-old Vikrama, who is housed in Dubare Elephant Camp, is participating in Dasara since 18 years and participating as ‘Pattada Aane’ in the puja rituals at Mysore Palace since 2015. He is 2.89 mts tall, 3.43 mts long and weighs 3,820 kg. While J.K. Putta is his Mahout, Hemanth Kumar is the Kavadi.

This 34-year-old male elephant was captured at Sakleshpur Range of Hassan Division in 2017 and it is for the first time he is participating in Mysuru Dasara.

Housed in Dodda Harave Elephant Camp, Ashwathama is 2.85 mts tall, 3.46 mts long and weighs 3,630 kg. He is being taken care of by Mahout Ganesha and Kavadi Shivu.