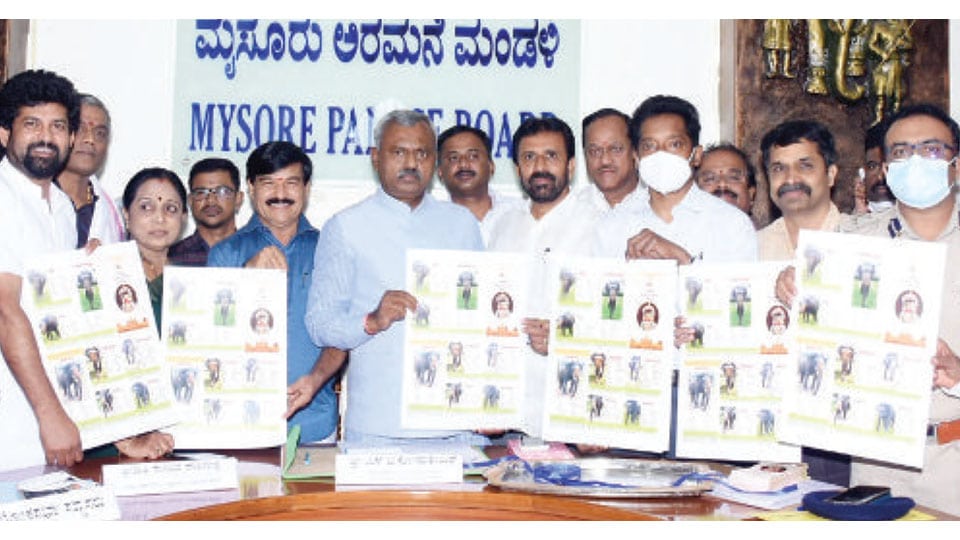 Mysore/Mysuru: With ‘Nada Habba’ Dasara festival, which is to be celebrated in a simple manner on account of COVID crisis, just  a month away, District Minister S.T. Somashekar said that ‘Gajapayana’, the march of Dasara elephants from their forest camps to Mysore Palace, will be launched at Veeranahosahalli in Hunsur taluk of the district at 9.30 am on Sept.13.

Speaking to presspersons after holding a Dasara preparatory meeting and release of ‘Gajapayana’ poster at Mysore Palace Board Office here yesterday, Somashekar said that last year only five  elephants were brought to Mysuru for Dasara. But this year, 8 elephants will be brought to Mysuru from different elephant camps in Mysuru and  Kodagu districts.

Pointing out that Dasara elephants will be accorded traditional welcome at Mysore Palace premises on Sept.16 (in the auspicious time between 8.36 am and 9.11 am), he said that the elephants will be taken back to their respective camps on Oct.17 after the conclusion of ‘Nada Habba’.

Noting that the Forest Department has sought Rs.50 lakh fund for maintenance of  Dasara elephants, the Minister said that the meeting agreed to sanction the sought fund along with clearing last year’s dues of Rs.23 lakh.

Referring to Dasara inauguration, Somashekar said that the festival will be inaugurated atop Chamundi Hill by performing puja to the presiding deity in the auspicious time between 8.15 am and 8.45 am on Oct.7.

Maintaining that the ‘Utsavamurthy’ will be brought in a procession from Chamundi Hill to Mysore Palace in order to enable people to have a darshan of Goddess Chamundeshwari  during Dasara, he said that  the selection of the dignitary  to inaugurate Dasara has been left to the discretion of Chief Minister Basavaraj Bommai.

‘Jumboo Savari’ procession will be held on Oct.15, with ‘Ambari Pushparchane’ to take place between 5 pm and 5.36 pm in the Palace premises.

Stating that Dasara elephant Abhimanyu will carry the Golden Howdah (Ambari) this time too, the Minister said that Abhimanyu will be accompanied by seven other elephants — Ashwathama, Dhananjaya, Vikrama, Kaveri, Chaitra, Lakshmi and Gopala- swamy.

Noting that 100-km length of Mysuru  streets will be illuminated during Dasara this year as compared to 60 kms last year, the Minister said that the street lighting will cover a total of 150 roads and 77 Circles and junctions in the city.

Continuing, Somashekar said that cultural programmes will take place only in the Palace premises for seven days in the evenings.

Asserting that artistes of the State will be given preference in cultural events, he said that the number of persons to be allowed to take part in ‘Jumboo Savari’ event inside the Palace premises on Oct.15 will be decided based on the COVID situation as at the end of September.

Referring to tableaux, Somashekar said that last year there were only two tableaux but this year, there will be three tableaux, including the ones that portray the rich culture of Mysuru, 75th year of Indian Independence celebrations and on COVID-19 awareness.