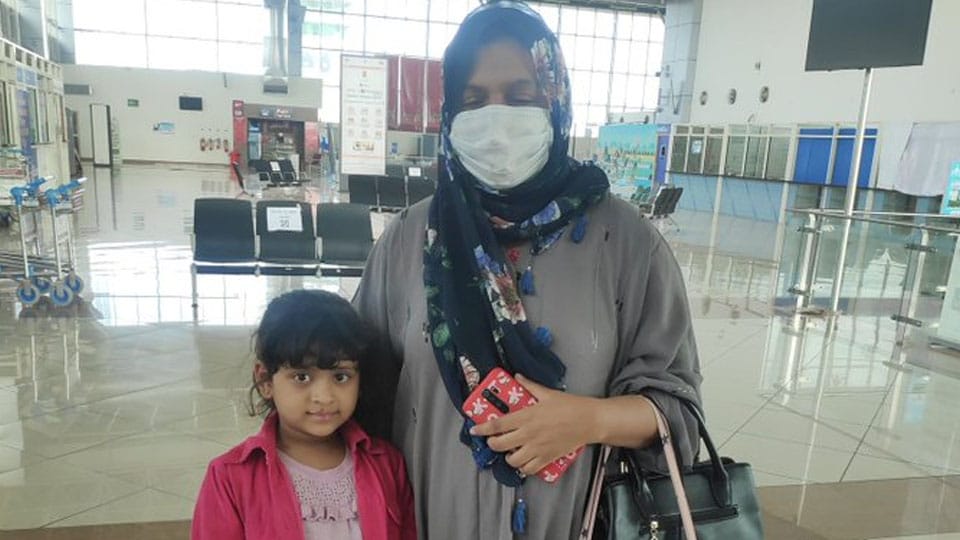 Mysore/Mysuru: Desperate times call for desperate measures and here is an incident reported from city to prove that.  An eight-year-old girl was united with her mother after three months following lockdown and the little one flew alone from Hyderabad to Mysuru in Alliance Air flight.

The incident came to light after the Airport Authority of India, Mysuru tweeted, “Nothing brings us more pleasure than to assist a daughter meet her mother after 3 months of lockdown. Salute to this brave girl who flew unaccompanied from Hyderabad to Mysore. AAI Mysore appreciates the efforts of @allianceair officials and all others who made the event possible.”

The girl, Syeda Umme Hani, flew from Telangana on June 9 Mysuru and she was stuck in Telangana while her mother Arjuman Banu was in Mysuru. The Alliance Air came to her rescue and ferried her from Hyderabad to Mysuru. Hani’s mother waited at the Mysore Airport for more than two hours to receive the little girl. The situation was tense due to the pandemic. There in Telangana too, Hani’s father Syed Abdul Umair too was worried and was relieved to hear that Hani had reached safely.

Sources said that Hani’s father is a businessman in Hyderabad while mother is a clinical pharmacologist in Mysuru. Hani goes to a convent in Kesare and had travelled with her father to Hyderabad in mid-March during her holidays while her younger brother and mother stayed in Mysuru.

Lockdown was imposed in the last week of March and there was no inter-State movement. The mother could not meet her daughter for almost three months and once the domestic flights resumed, the family took a decision to allow Hani to travel solo from Hyderabad to Mysuru. The mother and the child had not seen each other since Mar. 16 and it was Hani’s first fight journey.

Hani was desperate to see her mother and agreed to travel alone. It was an emotional movement at the Mysore Airport when Hani came running to Arjuman Banu and hugged her for over seven minutes. Mysore Airport Director R. Manjunath said that it was a special moment when the little one landed at the Mysore Airport unaccompanied. Alliance Air employees helped Hani in the journey, he added.