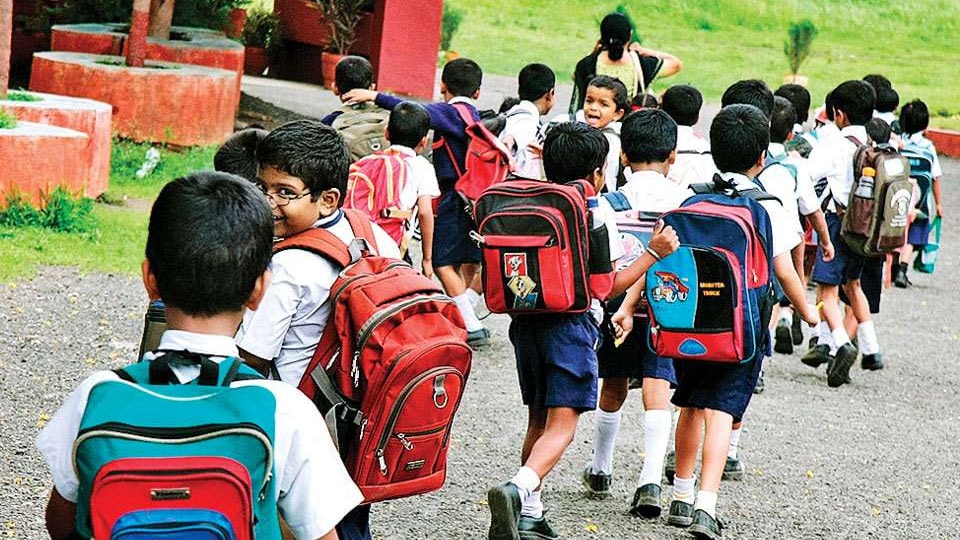 Schools ready to admit students but tepid response from parents

Mysore/Mysuru: Although the Schools in Mysuru district are all set to begin a new term, admission process in schools is still going at a snail’s pace.

Even as the State Government is yet to take a clear decision about when and how to re-open the educational institutions, Primary, Middle and High Schools in the district have started admitting students, but there has been lukewarm response from the parents.

As of now, the Minister for Primary and Secondary Education, after meeting with educational experts, mental health professionals, representatives of private institutions and other stakeholders, has banned schools from conducting online classes for students between lower kindergarten (LKG) and fifth grade.

The Minister has also given clear instruction to private schools not to hike fees this year owing to the critical economic situation due to the COVID-19 pandemic. But there does not seem to be any guidelines regarding admission process in private schools and hence, most of the private schools have opened their office premises and are eagerly waiting for parents to admit their wards.

Following relaxation of lockdown, most of the business establishments including hotels, restaurants and malls have been operational and are limping back to normalcy. What if there are no students or least number of students in a classroom is the million dollar question haunting the school administration.

Admission process would have completed by this time. But this year, schools have not reopened due to this pandemic. State Government has not issued any guidelines regarding admission process. Hence, parents can admit their children to school of their choice. Admission process is being carried out according to rules and regulations set up by the administration. – R. Raghu, Kautilya Vidyalaya

On the other hand, parents are under an obligation to do all they can for their children at home. Speaking to ‘Star of Mysore,’ Shakuntala and Gopal Rao said, “Ever since the lockdown came into effect, which is around two-and-a-half-months, our kids are staying at home. One or the other day, we have to admit them to schools, but the question is when and how long they are going to stay at home. As both of us are working, keeping them at home for months together would not be a good idea. Hence, we have decided to get them admitted to a nearby school.”

While both Government and private schools are waiting eagerly to admit students, most of the parents have not yet decided about school admission. Most of the school managements are taking all necessary precautionary measures including thermal screening of both children and their parents near the entrance, sanitising their hands and urging them to wear masks and maintain social distancing.

“Government and aided-private schools can admit students from June 8. However, there has been no clear cut guidelines issued for private educational institutions in this regard. State Government has no objection to admission process but the Minister is consulting experts as well as parents, representatives of private institutions and other stakeholders and would come out with a solution in the very near future.” – Panduranga, DDPI, Mysuru

Earlier, parents were eager to admit their wards to prestigious schools. In order to get admission in a prestigious school, some of them were trying to procure recommendation letter from elected representatives and other bigwigs. But this year, there has been a tepid response from parents, thanks to Coronavirus fear and lockdown.