The Conference, held under the aegis of Karnataka State Election Commission, is the first one in the city and the third in the State.

Welcoming the dignitaries, Karnataka State Election Commissioner P.N. Sreenivasachary said that Mysuru is hosting the Conference for the first time.

Explaining the rich history of Mysuru, Sreenivasachary said that Mysuru, known as the city of Palaces and cultural capital of the State, supplies indelible ink to all the States for use in elections, right from local bodies to the Lok Sabha polls.

Pointing out that Karnataka had hosted two such Conferences in 2003 and 2010, he said that during the course of the two-day meeting in city, the Election Commissioners (ECs) will hold discussions with official representatives from Bharat Electronics Ltd. (BEL), Electronics Corporation of India Ltd. (ECIL), both suppliers of Electronic Voting Machines (EVMs) and Mysore Paints and Varnish Limited (MPVL) that supplies indelible ink to the Commission.

Noting that the Conference provides a platform for discussions between Election Officers and EVM suppliers, Sreenivasachary said the meet will also discuss the demand for online nomination of candidates and online voting system, apart from deliberating on issues confronting the ECs while holding elections, particularly to local bodies.

Underling the rich heritage and tradition of Mysuru, he said that  the former President of India Dr. Sarvepalli Radhakrishnan had taught in the University of Mysore and great personalities like Kuvempu and R.K. Narayan lived in the city. 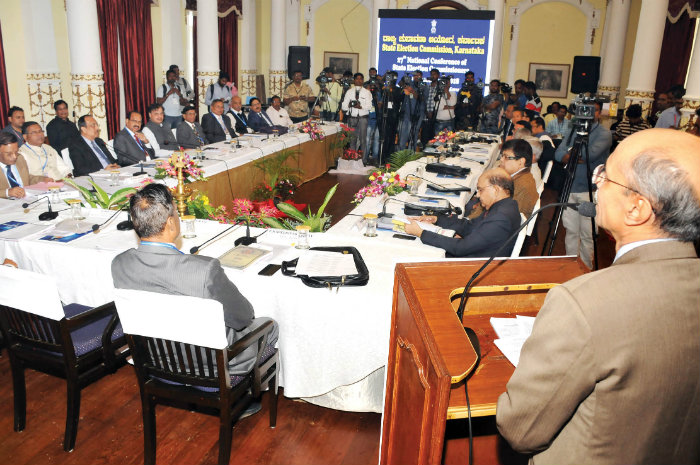 Recalling the contributions of erstwhile Mysore Maharajas, he said that Mysuru was proud that the indelible ink manufactured by MPVL can be found on the fingers of every voter of the country.

S.K. Srivastava, Convenor and State Election Commissioner, NCT of Delhi and U.T. Chandigarh, in his address, said that the conference will hugely help in having a better understanding between officials and EVM suppliers on the use and functioning of EVMs.

The two-day meet will discuss a whole range of poll issues such as use of EMVs, legal hurdles coming in the way of holding elections on time, enforcement of the model code of conduct, electoral reforms, new regulations etc. The outcome of the discussions at the conference will be shared with the ECs of all States, he added.

Parasuram, Chairman and Commissioner, State Election Commission, Madhya Pradesh, explained the significance of the meeting and said that the meeting will discuss issues such as providing funds to the EC for holding polls, tasks and challenges before the  EC, framing of laws in respect of NOTA option (None Of The Above), strict implementation of Model Code of Conduct, amendments to existing laws for further strengthening the electoral process, poll reforms, changing over from Ballot papers to EVMs even in local body polls and the like.

All the ECs, who arrived in city yesterday, are staying at Lalitha Mahal Palace Hotel. The conference concludes tomorrow.