Home » Columns » Abracadabra By K. B. Ganapathy » The last time I saw Ambarish: A tribute 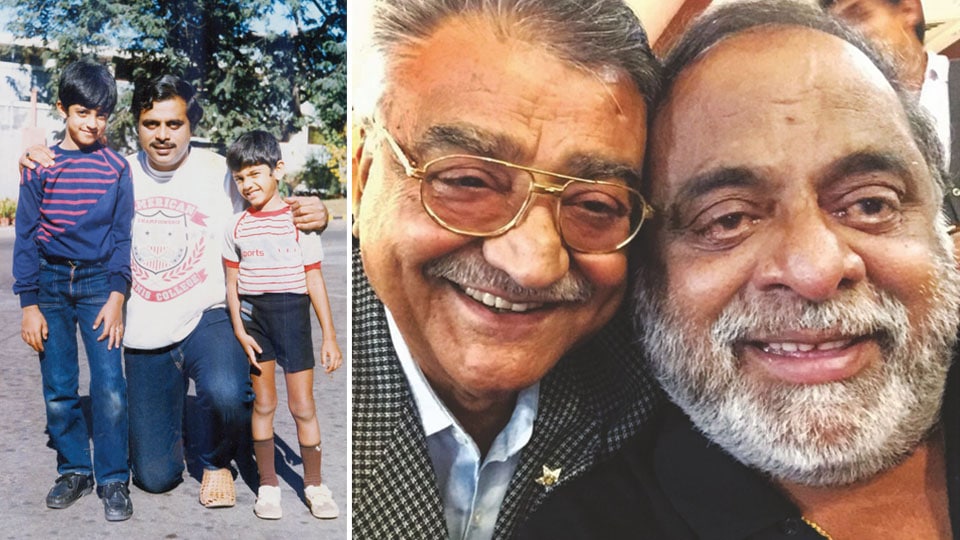 The last time I saw Ambarish: A tribute

I have known Ambarish since 1980. In the beginning I had only heard of him from my friends who spoke of him as a Mysore boy, naughty one, who became an actor accidentally. Hence, we can call him an accidental actor in the manner people call Dr. Manmohan Singh an “accidental” Prime Minister !

Then the often repeated narration goes, how he was discovered by the Kannada film-world’s legendary Director Puttanna Kanagal and asked to play a very, very minor role but the one that prepared the ground for the development of the film’s story. The film was an all-time hit —‘Naagarahaavu.’

Here the dialogue too was of a few seconds with the now famous “ಹೇ ಬುಲ್ ಬುಲ್ ಮಾತಾಡಕ್ಕಿಲ್ವಾ?” (Hey, Bulbul, won’t you talk?). A teasing dialogue delivered at a reluctant girl going to college.

The film’s hero was another debutant Vishnuvardhan. But look at the luck of ‘Ambarish’. It is the film name given to M.H. Amarnath by Puttanna Kanagal, just as the film name ‘Vishnuvardhan’ given to Sampath Kumar. Both these actors rose to the pinnacle of the Kannada film-world but surprisingly Ambarish was the marquee name for publicity when the film ‘Naagarahaavu’ was re-released in colour last year. By the way, in a TV interview Ambarish denied that this name was given by Puttana Kanagal. He said, it was also his name. Whenever he came to Mysuru he was staying, I guess, in his relative-friend’s house in Jayalakshmipuram. It was L. Vivekananda of King’s Kourt Hotel who introduced him to me and my then partner C.P. Chinnappa. They used to play cards and Chinnappa and I were also invited. Since I am not lucky in gambling I avoided, but Chinnappa being lucky used to play occasionally.

Ambarish was growing tall as an actor and made a name for himself. He gave stellar performances in a few films that became big hits like ‘Antha,’ ‘Ranganayaki’, ‘Naagarahaavu’ that I mentioned earlier and ‘Chakravyuha.’ He was a frequent visitor to Mysore and used to stay in Kings Kourt Hotel and later at Sandesh The Prince of Sandesh Nagaraj, who also became a successful Film Producer.

My contact with him was as an acquaintance. He was a member of Mysore Race Club (MRC) where we would meet at Derby dinner tables or in parties hosted by MRC members on behalf of candidates they proposed for MRC membership.

In the early years of 1980s when I went to Bangalore, I would stay at the Woodlands Hotel near Sri Kanteerava Stadium. By then, I knew Ambarish well, a shining star of the Kannada film-world. He was also staying there in a room permanently reserved for him. One day, I arrived at the Woodlands early morning at around 9 with my wife and two sons who were school-going and probably, looking at Ambarish with admiration as fans. Ambarish was there at the portico. We wished each other and were exchanging pleasantries when my children joined us and wished to have photographs with him. Being a very friendly and affable person, Ambarish patted them, went down on his knees, put his hands around their shoulders and then posed for a few photographs (see pic). FROM THE ALBUM: The friendly and affable actor Ambarish with my two sons at Woodlands Hotel. “Truly I say unto you, unless you change and become like little children, you will not enter the kingdom of Heaven,” said Jesus. For the sake of taking this photograph, Ambarish changed himself and became like my children by going down on his knees as seen in this picture. Believing Jesus, I am sure Ambarish must have entered the kingdom of Heaven!

Many years later, when my elder son Vikram sought election for the membership of MRC, as is the practice, I sent out routine letters to all the MRC members seeking vote. But in my letter to Ambarish, I included a copy of this photo hoping it would help and ensure his vote. Whether the photo worked or not I do not know. But, when he met me after sometime, he remembered to mention the photo and said in his own inimitable manner with a broad smile in Kannada, “ಏನಪ್ಪ, ಮಗನ ಫೋಟೋ ಕಳಿಸಿದ್ದಿಯಾ. ಒಳ್ಳೆಯ ನೆನಪು. ಹಾಕದೇ ಇರ್‍ತ್ತೀನಾ?” [What man, you sent that photo and revived my memory. Will I not vote for him?]. However, when I sought his vote for my second son Mickey, I did not resort to this gimmick.

Be that as it may, on the last day of February 2018, that is on 28th evening, I met Ambarish for the last time at Hotel Southern Star. Again the occasion was the dinner hosted by R. Raja Chandra, to seek support for his candidate for MRC membership. These days, I avoid this kind of dinners but in this case I could not but honour Raja’s invite. And I was happy for it because I could meet Ambarish among my other old friends.

I was standing near the bar counter chatting with friends at a pedestal round-table when I felt someone putting hand around my waist in an embrace. I turn around and whom do I see — Ambarish. Yeno Ganapathy, Hegiddiya, was his refrain in a hearty, gurgling voice and his typical winning smile, bright wide eyes and face with salt and pepper stubbles.

Showman photographed by yours truly. (Pic right) Selfie by Ambarish

Soon, a few of his friends joined in, with Kings Kourt Vivek by his side and yours truly sipping the golden liquid even as the actor lit a cigarette getting ready for a ‘small one.’ Health is important. No ordinary showman he is in Sandalwood, there was a horde of servitors of the hotel to serve him (see the pic I took). Even as I was taking this picture, he said, “Come over, we will have a selfie.” When I said I was no good in taking selfie, he took my cellphone and clicked one. There you are! (see the pic. he took). All this aside, our conversation veered towards Sridevi, the diva who had just passed away. Ambarish had acted with her in a Kannada film as I guessed from what he was saying. His opinion about Sridevi as an actor — she is not an actor, she is a ‘character.’

A ‘character’? All eyebrows around Ambarish went up with eyes wide open. “Yes, if she acts Ganapathy, she becomes Ganapathy. She totally becomes the character she played. Hence a ‘character’.”

He seemed to wonder at human destiny and recalled how he was taken to Singapore in a critical condition by Air Ambulance and survived, but Sridevi who was keeping good health suddenly died.

Obviously, Ambarish had become health-conscious, and it was there in his face — the good old infectious smile, the staccato speech, hail-the-fellow-well-met approach while meeting his friends and fans. The cigarette was more for show, he hardly inhaled. And the small one, remained small one in the glass.

Looking at him and talking to him, I thought this Kannada film-world’s Rebel Star and an iconic figure must get back to films, where he really belongs, like Amitabh Bachchan has done and eschew politics where he seems a misfit. Sadly, he “eschewed” not just politics but the world itself. Too young at 66 to die in the modern day world. RIP dear Ambarish.

4 COMMENTS ON THIS POST To “The last time I saw Ambarish: A tribute”