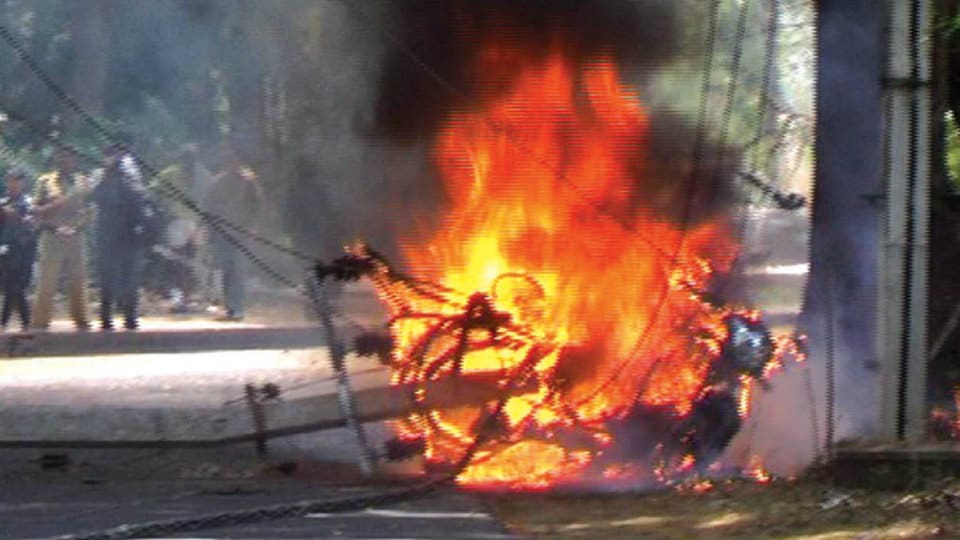 A two-wheeler rider had a providential escape yesterday afternoon as an electric pole fell on his bike. As soon as he saw the pole crashing on his bike, he jumped and moved aside. Moments later, the bike burst into flames.

The incident was nothing short of a filmy type and passers-by were seen complimenting the two-wheeler rider for his presence of mind and alertness.

The incident occurred yesterday afternoon at around 2.15 pm on the foothills of Chamundi behind the Race Course near Olive Garden. Bharath, a resident of Gayathripuram in city, was riding his Hero Honda Shine motorcycle on the road when a  car that was coming from Chamundi Hill rammed against the electric pole. The car was speeding and Santhosh, who was driving it, lost control and collided against the electric pole. Due to the impact of the accident, the pole came crashing down along with two other poles.

Bharath, who was on his bike nearby saw the crashing poles and immediately jumped out of the vehicle to a safe area.

The moment Bharath jumped out, one of the electric poles crashed on his bike and electricity came in contact with the metal parts of the vehicle. Soon, the friction resulted in fire and moments later, the fuel tank of the bike exploded causing   a major fire.

Hearing about the incident, Fire Service personnel rushed to the spot and doused the fire. Power lines were switched off in the area as a precautionary measure. Santhosh, the car driver who hails from Mandya, also sustained injuries and was treated as an outpatient at a private hospital.