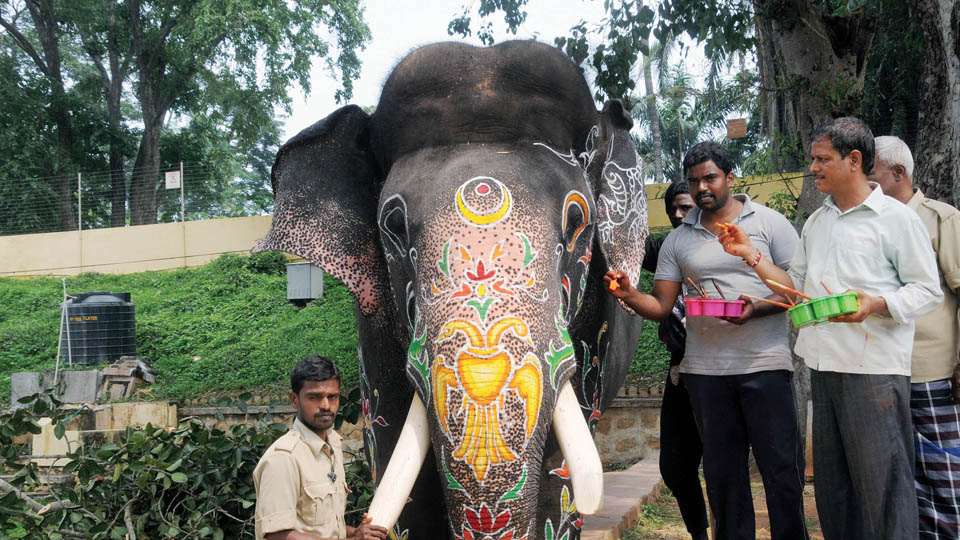 The Nada Habba (Dasara) celebrations is a vibrant assortment of cultural events and procession, but it is truly incomplete without the majestic Jumboo Savari.

The make-up artist also embellishes the leader of the elephant group, the one and only Arjuna, who is given the responsibility of carrying the coveted 750-kg Golden Howdah. Since six years, Arjuna and his troupe have never failed to mesmerise the spectators with their majestic walk with costumes and facial charisma.

Nagalingappa is currently working as a Fine Arts teacher at Panchavalli Government School of Periyapatna Taluk, Mysuru. In spite of holding a full-time job, he has been keeping the tradition of “decorating” these majestic elephants during Dasara fest.

Nagalingappa Badiger basically hails from Kurthakoti village of Gadag district and holds a Diploma in Drawing and Painting. He received the job offer of decorating the Dasara elephants, while he was working as an Art teacher at Vyjayanthi Art School and since then, he has been continuing his amazing work of  beautifying the  Dasara elephants with the support of his brothers Arun and Narayan, maternal Uncle Ravindra and his associates Madhusudan and Lokesh.

“Painting, drawing and facial  make-up for these gentle giants  is not an easy task.  It is an arduous job to draw and paint them as they generally don’t stand still while the art work is being carried out.  The elephants keep moving around, raising their huge trunks and twitching their giant ears and tiny tails while drawing and colouring them,” says Nagalingappa Badiger.

He and his five associates caught the attention of the public recently, with their aesthetically-alluring makeup they had done to  the elephants for the Cultural Procession. 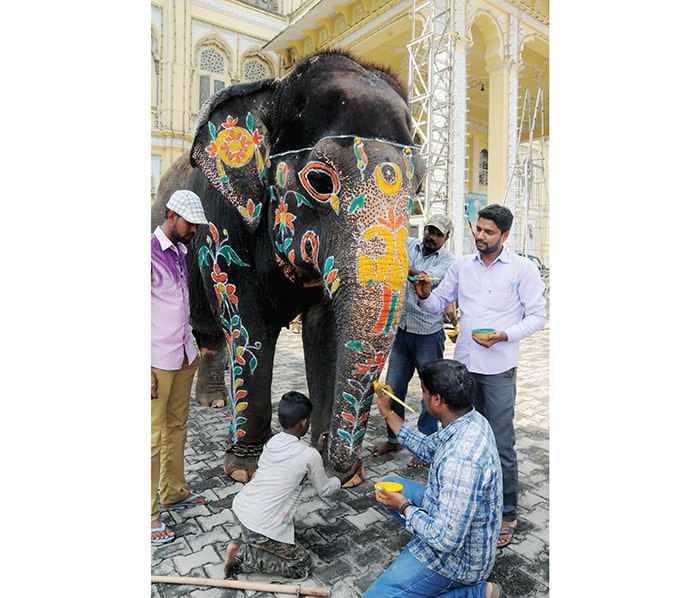 Palace elephant Preethi getting a coat of colours.

On the day of Vijayadashami, the elephants bring an extra zest of life and colour to Mysuru Dasara with bright paintings and vibrant art-work adorning their trunks, giant ears and limbs. The paintings and art-work usually represent the colour, ethnicities and culture of the land.

The make-up artists draw pictures of Shankha (conch), Chakra (the weapon of Lord Krishna) on the ears of the elephants. The trunk is adorned with pictures of Gandabherunda (two-headed mythological bird) and other pictures of leaves, flowers, buds and creepers.

The rear portion of the elephants are further beautified with pictures of parrots and snakes that are usually the size and the length of the elephant’s tail.  The religious symbol of the three Shiva Namas (three horizontal lines) and other circular drawings adorn the elephants’ forehead. Various beautiful sketches are drawn on the other body parts of the elephants, purely to enhance the exquisiteness of the elephants, as they take to the streets on the day of Vijayadashami.

Water Paints: The makeup artists use water paints to draw the pictures and illustrations to ensure that the art-work do not cause any skin irritation or skin damage to the elephants. For this grand occasion, the elephants also get their nails done with bright golden colours. To achieve a 2D effect, the artists use chemical-free bright colours (white, red, green, yellow, orange) for the illustrations.

Palace Elephants too get touch-up

Other than the 12 Dasara elephants, there are six female elephants, which belong to the Mysore Palace. Mysuru-based make-up artist Raju has been adorning the six female elephants Ruby, Seetha, Chanchala and Preethi during the Dasara festivities for the last few years. Another artist Arun decorates Vikrama, the Pattada Aane (Royal Elephant) and Gopi, the Nishaane Aane (Lead Elephant). 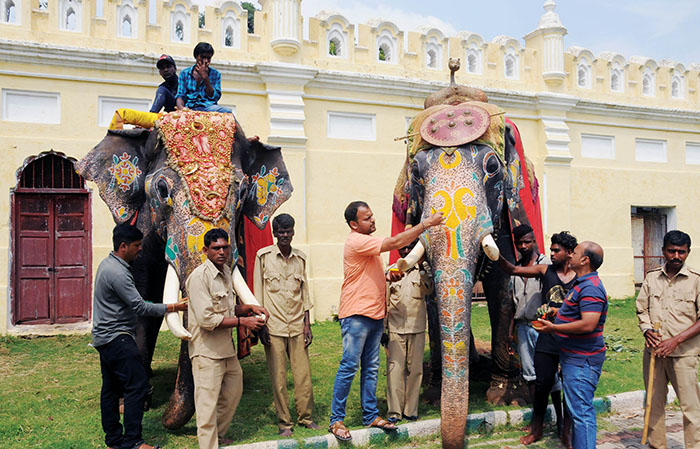 The artistic works of Nagalingappa, Arun and Raju for the Dasara elephants and the Palace Elephants have received wide appreciation from the people.