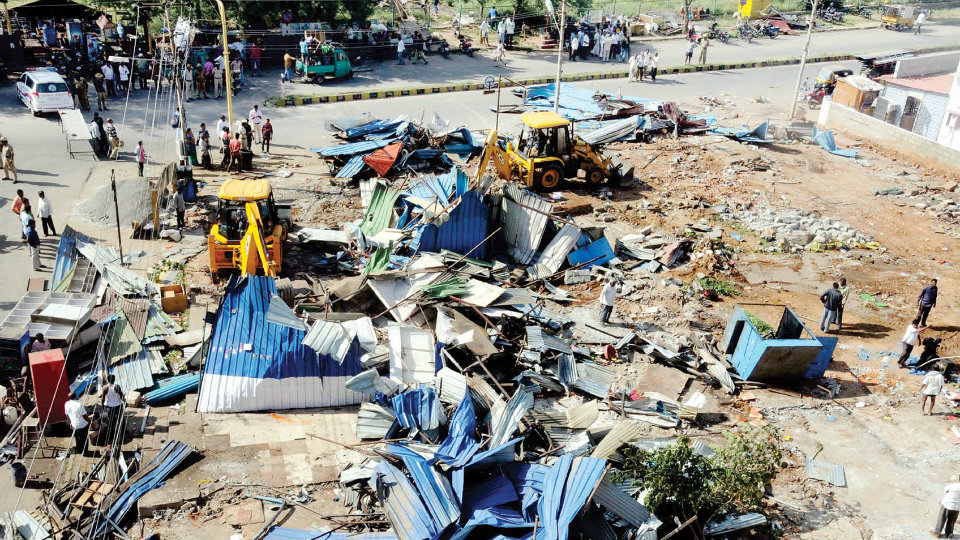 Mysuru: Armed with a demolition order, Court officials, with the help of Vijayanagar Police, cleared encroachments on a private land near Doddathammaiah Circle at Vijayanagar Second Stage in city this morning.

Based on a Court directive, they brought down more than 16 shops that had illegally occupied the area. The shops included tea, ice cream and other shops that were established in 13 guntas of land.

The encroachments were cleared in the presence of Court Amin Sripad. A large number of people had assembled at the place to witness the demolition process.

There was a property dispute between Puttalakshmi, wife of M. Gangadhara of Palahalli village of Srirangapatna taluk and Devanna, son of late Subbegowda of Kumbarakoppal. Puttalakshmi had filed a petition in the Court of Additional Senior Civil Judge, Mysuru. The petitioner alleged that some anti-social elements had colluded and encroached upon the land with indirect support of certain unscrupulous government officials. The Court had given the ruling in favour of Puttalakshmi besides directing the Police to clear encroachments. Workers and earthmoving machines hired by the petitioner cleared the encroachments.

Speaking to Star of Mysore, former Corporator Shivamadu said that his sister Puttalakshmi had purchased 13 guntas of land from one Devanna. But one of the sons of Devanna claimed share in his father’s ancestral property and moved the Court. However, the Court gave the verdict in his sister’s favour and directed the Police to clear encroachments.