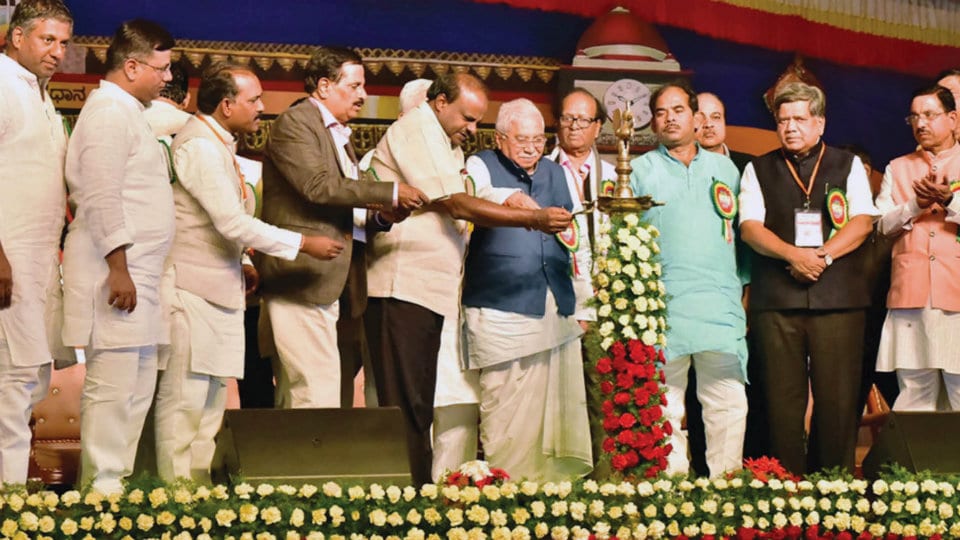 Dharwad: The 84th Akhila Bharatha Kannada Sahitya Sammelana got off to a rousing start in Dharwad on Friday, with the Sammelana Chairperson Dr. Chandrashekar Kambara being taken in a procession from Karnataka College to University of Agricultural Sciences (UAS) campus, the venue of the meet.

Dr. Kambara, his wife Satyabhama and Kannada Sahitya Parishat President Manu Baligar were brought in a five kilometre procession to the venue in a decorated silver-coloured chariot, amid cheers from thousands of people who had gathered all along the route.

Delivering the Presidential speech at the inaugural ceremony of the three-day annual literary festival, Chandrashekar Kambara observed that education from pre-primary level to class seven should be in Kannada medium and private schools should be allowed to impart education only from class eight.

Pointing out that this was the only way to save Kannada language, which is facing danger from the onslaught of English in every field, Kambara said today English has endangered all regional languages.

Recalling how British Educationist Lord Macaulay introduced English in education in India, Kambara said the Indian psyche now feared that it will remain backward if it does not embrace English.

Noting that English has become inevitable in all walks of life in the country and this tendency posed a danger to all the regional languages, Kambara maintained that gaining basic knowledge in a subject in one’s mother-tongue or regional language will always be valuable.

READ ALSO  Wedding in the times of social distancing

“To make this possible, the Government must provide books on Science subjects such as Physics, Maths, Chemistry and Biology in Kannada and teach the subjects effectively to students in Kannada,” he said while stressing on the role of teachers in this regard.

Stating that channels like National Geographic and Discovery telecast valuable information in English and it is dubbed into other languages, he observed that Karnataka should also dub the contents into Kannada and beam it for the benefit of our children.

Earlier, Chief Minister H.D. Kumaraswamy, who spoke after inaugurating the three-day Literary Fest, said the decision to introduce English as a medium of instruction in 1,000 Government Primary Schools from class one was taken with a view to empower underprivileged children.

Pointing out that people opposing the decision should consider the interests of underprivileged families who wish to send their children to English mediums schools, Kumaraswamy reiterated that his Government was committed to protect and promote Kannada.

Asserting that he was ready to discuss the issue with experts and writers, he asked them to come forward with valuable suggestions taking into account  the ground realities.

Taking a jibe at the Right To Education (RTE) Act introduced by the previous UPA regime at the Centre, the CM said the RTE was only helping private educational institutions.

Dubbing the RTE as a ‘bogus programme’, he said that though the Act was introduced to provide educational access to  all, it has only weakened Government Schools.

Terming the decision as a disaster for Kannada, Champa asked Kumaraswamy not to become a “Kutaraswamy” for Kannada tree, which has grown into a huge tree through centuries.

Maintaining that he was not opposed to learning English as a language, he said that the Government must withdraw the decision to introduce English medium in Government Schools right from class one.

The venue has 50,000 seating capacity with eight huge LED screens.