Home » News » Everyone wants to do Yoga with PM Modi: Celebrity status propels sale of Yoga mats in city 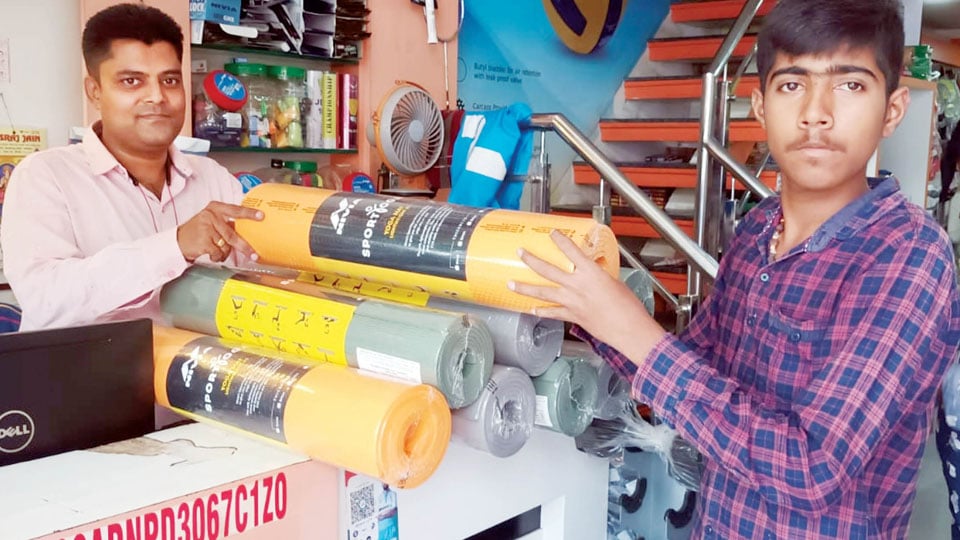 Everyone wants to do Yoga with PM Modi: Celebrity status propels sale of Yoga mats in city

Mysore/Mysuru: Yoga is a practice that dates back to the time of the Vedas over 5,000 years ago. The age-old tradition is now a lifestyle that attracts millions of people not just in India but across the world. And it is a billion dollar market.

While a major share in the revenue is through services offered by Yoga schools and teachers in India and abroad, a sizable income is generated by marketing yoga products and accessories such as Yoga mats.

Prime Minister Narendra Modi gave what could be called the biggest push to Yoga by proposing the idea of International Day of Yoga (IDY) on Sept. 27, 2014 at the United Nations General Assembly and the first IDY was observed on June 21, 2015.

With the IDY becoming a huge deal, more people have started following Yoga more aggressively. This year, it is the eighth IDY and PM Modi is coming to Mysuru to lead the event at the Mysore Palace.

With the popularity of Yoga on the rise, the sales of Yoga mats have grown. The demand shoots up especially in June and sales have peaked this year as the IDY in Mysuru has attained a celebrity status, thanks to the PM’s participation.

In fact, Yoga has taken Mysuru by storm and its popularity is visible every day with the rising number of performers — students, public, Yoga Federation members, Pourakarmikas, physically challenged, HIV positive children, transgenders and others are registering themselves to take part in the mega event on June 21. It is a sure to be a once-in-a-lifetime opportunity.

Many people are thronging shops and online marketplace to buy Yoga mats resulting in high sales. Sales have peaked at well-known supermarkets and hypermarkets. Several shopping hubs like in Shivarampet have stocked up mats and have even asked the suppliers to make the stocks readily available in case the stocks at the counters get exhausted.

Sales at most of the shopping areas have crossed 300 to 350 per day and there are an equal number of enquiries. To cash-in on the demand, online marketplaces too are offering quality and discounts to customers. But many customers are preferring to buy the mats after personally seeing it and feeling the texture, softness, make and the brand of course.

Lalith Kumar Jain, who owns a wholesale shop at Shivarampet, told Star of Mysore that he was happy that there is a huge demand for mats.

“Every year, there is a good sale of Yoga mats in June and this year, thanks to the PM’s arrival, the sales have just got a boost. Moreover, as Yoga classes have become compulsory at schools, there will be a perennial demand for mats even after the Yoga Day,” he added.

“More than 10 Yoga mats are sold in a day in our outlet and sometimes they move fast and we have to turn back customers. There are various colours but many choose blue, orange and green as their preferred colours. The price of 4-mm mat is Rs. 300, 6-mm mat is Rs. 400 and 8-mm mat is Rs. 600. More than 1,000 mats have been sold in the last fortnight,” Lalith Kumar said.

More Megastore on Narayan Shastri Road, Devaraja Mohalla, sells eight to 10 mats every day. “There is a lot of demand but we are not facing a shortage,” said Store Manager Sridhar.

Which Yoga mats are preferable?

A Yoga mat gives a personal yoga space to those who perform Yoga. A mat will be 24-inch wide and 68-72-inch in length. It is spacious and comfortable enough for one person to fill in. They are usually made of PVC rubber which are made up of anti-skid materials, preventing one from slipping due to sweat.

Yoga mats vary in thickness, composition, surface texture, stickiness or grip, and weight, as well as price. The rates will also be dependent on the thickness.