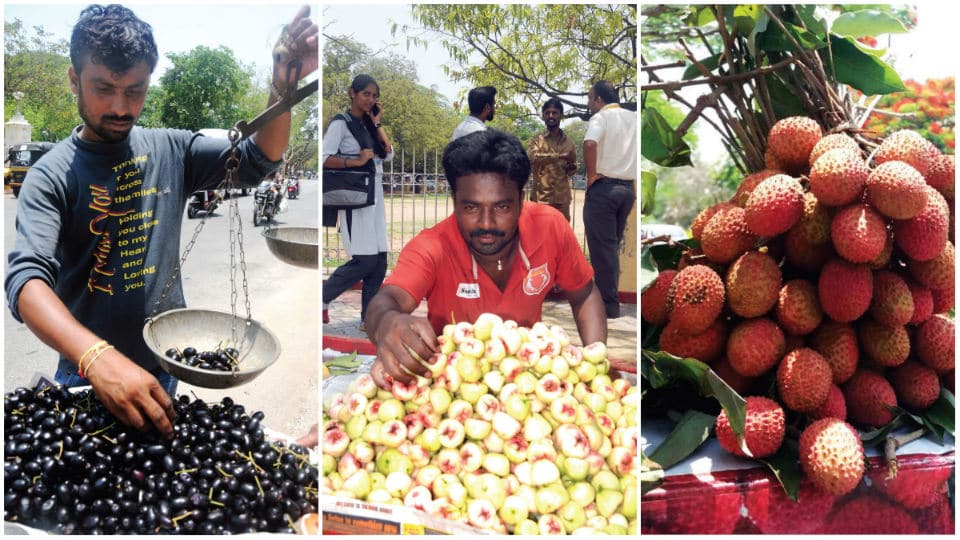 Mysuru: Exotic summer fruits like Jamun, Litchi and Rose Apple have arrived in the city along with the seasonal mangoes, jackfruits, musk melons and water melons.

These delicate and tasty fruits are also priced high and are sold at select pockets of the city. They are nutritious in their own right and have a distinct taste and aroma and summer is the best time to savour them.

The fruits that have arrived in city a couple of days back are being sold on Crawford Hall Road, Kalidasa Road, Yadavagiri near Akashavani, near Deputy Commissioner’s Office and some residential pockets in Kuvempunagar and Saraswathipuram.

Jamun fruit or the black plum with scientific name Syzygium Cumini is also known as jambul, jambolan, jamblang or jamun. In Mysuru, the fruit is grown in abundance at Rammanahalli, Hanchya and surrounding villages.

Jamun trees are wonderful for shade and have abundant small and sweet fruit during summer. But in recent years, people have become used to eating the large hybrid variety, which is available for many more months in the year and so, the small variety is not picked and sold as much as before.

Every year, jamun sellers can be seen all over the city. Some vendors have been coming for many years and some since their childhood. One seller near the Crawford Hall, probably in his 50s, said he has been coming to the city for over 20 years. Sometimes whole families come to Mysuru to sell the fruit from villages.

Sellers come from the villages with the fruits and sell them directly to the buyers. “We don’t sell it to middlemen as they eat away the profits. We start from our villages in the afternoon and come to city on our bicycles. After selling the fruit till about 7 pm, we either return to our villages or sleep inside any park and return home the next morning. Again the routine continues,” said Swamy, a vendor near Crawford Hall.

According to Jamun sellers, the price reduces progressively over the jamun season — with the prices at around Rs.200 to Rs. 250 per kg now at the start of the season and Rs.30-40 per kg at the end of the season. “Last year, the crop was abundant and was very tasty too. But this year the yield is less and another hybrid variety comes from Bengaluru that is a bit less in taste when compared to the fruits grown in and around Mysuru,” said another vendor.

Jamun fruit is good for diabetes patient as it has  many anti-diabetic features. It helps convert starch into energy and keeps blood sugar levels in check. It is low on glycemic index and reduces diabetes symptoms like frequent urination and thirst. It also increases haemoglobin content and helps in keeping skin in healthy condition.

Rose Apple (Syzygium Aqueum) is Vitamin C and Vitamin B3-rich fruit which prevents health ailments such as stroke, diabetes, constipation, cramps, etc. The fruit is also called Rose Paneer. Shaped like cashew fruit, these rose apples are pink and white in colour and when placed in a heap, it is bound to attract buyers.

Cashing in on this visual appeal, vendors arrange the fruits in such a way on their baskets placed on their bicycles to attract passers-by. While people familiar with the fruit stop by and buy, those who do not know about it ask for one or two fruits to taste and then buy. Some enterprising vendors always keep salt and chilli powder with them for buyers to experience that tangy taste. Rose apples are grown at Mellahalli on the Bannur Road and are being sold for Rs. 120 per kg.

The litchi or lychee is the member of soapberry family, Sapindaceae. It is a tropical fruit tree native to the Guangdong and Fujian provinces of China. Litchi acts as a precursor to the arrival of summer and the fruit is a good source of several vitamins, minerals and healthy antioxidants. Besides being sweet and nutritious, these berries bring cooling effect on the body to beat the summer heat.

Litchi is considered as an exotic fruit which has a very short shelf life. It offers numerous benefits to skin, hair and health. A kilogram of litchi is being sold in Mysuru for Rs. 380 to Rs. 400. Only one downside in buying this fruit is that you have to buy them along with bunches that will add to their weight.