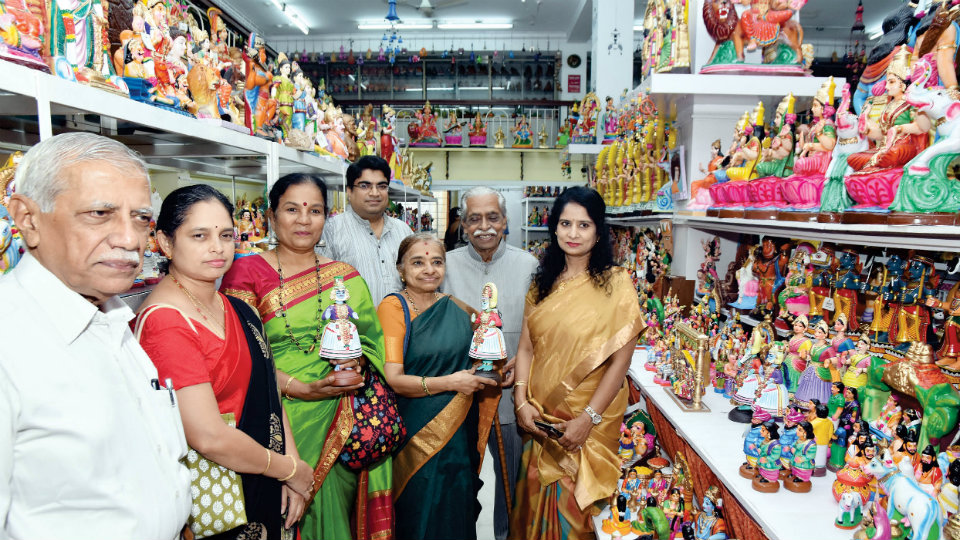 Mysuru: “It looks like I have come to the world of dolls. Just looking at them takes me back to my childhood which reflects the tradition of the times. As I am looking at them, I feel like using them in my plays,” said Rangayana Director Bhagirathi Bai Kadam.

She was speaking after inaugurating the 15th edition of annual doll festival Bombe Mane- 2019 at the Pratima Gallery on Nazarbad Main Road, here yesterday and said in Bombe Mane, the country’s culture and art are on display. The contribution of Ramsons Kala Pratishtana to the city in the field of art and craft is indeed laudable, she added.

Well-known Karnatak music exponent Dr. R.N. Sreelatha, who inaugurated the special display sections, said the dolls have been very neatly arranged. This is a temple of dolls. There are dolls of all Gods and it is attracting everyone.

The 15th edition of Bombe Mane is celebrating the 60th anniversary of Barbie Doll (launched by America’s Mattel Toy Manufacturing Company) with a diorama of Barbie dolls in various avatars along with ethnic dolls from countries like Uzbekistan, Thailand, Vietnam, France, Germany, Britain etc.

There is a special display of dolls, rare photographs, paintings and some vintage oleographs of Mahatma Gandhi, Nalwadi Krishnaraja Wadiyar, Pandit Jawaharlal Nehru and Sri Jayachamaraja Wadiyar whose 150th, 135th, 130th and 100th anniversaries are being celebrated respectively.

In the olden days, it was  given to stand out and proclaim one’s identity proudly. This aspect is reflected in another unique display called ‘Varnaankita’ the fascinating tradition of naamas and tilakas, the forehead marking of Hindus. This sectarian symbolism made it easy for everyone to be identified.

Parrot holds  a special place in Hindu mythology wherein Goddesses Parvati, Meenakshi, Andal, Kamakshi, Matangi, Lalita and Rajarajeswari are seen holding a parrot each. Apart from this one can see the vivid hued parrots-Leela Shuka-flocking together to welcome the Goddess and God of love-Rati and Manmatha.