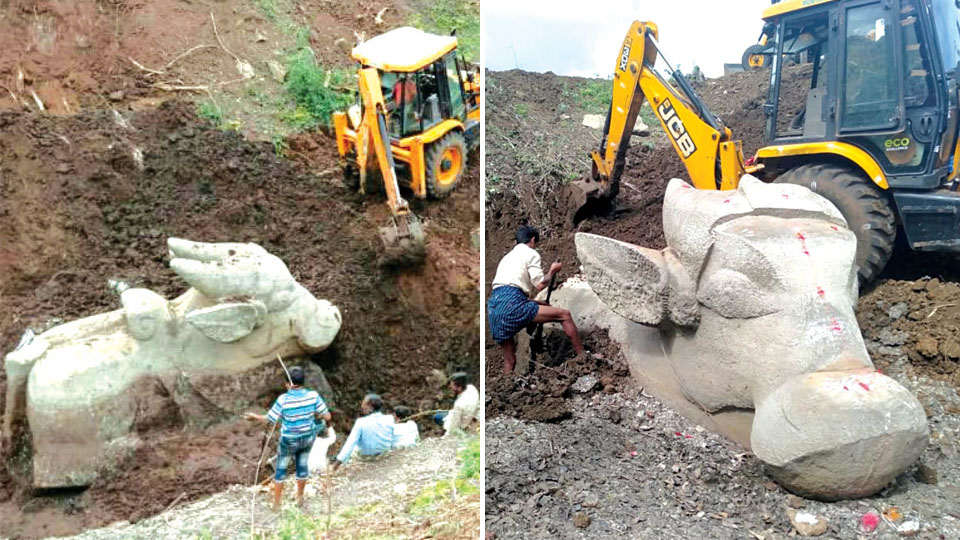 Mysore: Villagers of Arasinakere in Jayapura Hobli of Mysuru taluk have unearthed two giant statues of Nandi (bulls) in a nondescript field that was so far marooned in water. The idols are monolithic and so far were buried deep inside the earth.

Interestingly, the name of the village Arasinakere, translated to English means ‘King’s Lake’. Villagers say that the Lake was frequently visited by Jayachamaraja Wadiyar during the fag end of his rule.

While one Nandi statue measures 15ft in length and 12 ft in height, the other statue is smaller. The horns of the Nandis were observed by the villagers and following this, villagers started offering pujas to them. The statues were excavated yesterday using earthmovers in a four-day long operation.

The statues were found facing each other, which has roused curiosity among the villagers and people in surrounding areas, who have started thronging the spot.

According to a villager, Jayachamaraja Wadiyar, who had heard about a temple of Basaveshwara that had remained under water, came to the village and saw water that had covered the entire field.

He then dispatched men and materials including a motor to pump the water. Villagers say that Jayachamaraja Wadiyar had come to know about the existence of a Shiva temple (Basaveshwara) complete with Nandi Statues and the idols of other Gods and Goddesses.

Villagers said that the men could not accomplish the task even after one week of relentless work as the presence of water was a daunting factor. Jayachamaraja Wadiyar had to be content by performing puja to the water as he believed that his prayers will reach the Nandi, termed Basaveshwara by villagers.

After Jayachamaraja Wadiyar’s futile efforts to excavate the giant statues, villagers continued their efforts from time to time and launched the work of removing water. They eventually succeeded but only the facial part of Nandi could be seen. Since then, they have been worshipping the idols.

Now, they have finally excavated the remains using earth movers. They have also found various other idols of the Gods and Goddesses proving the existence of a huge temple, now buried under earth.

Some villagers said that more than ten idols of Gods too were found at this spot but they did not have a specific identity of them. Although these idols are said to be dated to the Mysuru Maharaja rule, there is no clarity about this, they said.

The villagers also regretted that the Archaeology Department had failed to visit Arasinakere, which is just 15 kilometres from Mysuru and conduct a study of the Nandi statues and other idols. Pointing out that they have been worshipping these statues for over three decades, they said that the locals were doing the job of removing the silt around the statues once the water receded at the spot, so that they could be better visible.

Arasinakere Gram Panchayat member Somanna said that barring a single visit by the Archaeology Department officials to the spot, nothing has happened later on. He wanted the authorities to preserve the Nandi statues and develop the spot on the lines of Nandi statue atop the Chamundi Hill.

Mysuru Heritage Committee member Prof. N.S. Rangaraju, who is also the Convener of Mysuru Chapter of Indian National Trust for Art and Cultural Heritage (INTACH), said that a villager had told him about the statues and he had visited the spot about 18 months ago. But as the spot was fully filled with water then, he could not see the statues.

Besides, the face-to-face location of the statues too is surprising. Whether there was a Shiva temple at the spot or were these statues meant for relocation to any other place can throw more light on the statues, he said. Meanwhile, Department of Archaeology, Museums and Heritage Commissioner T. Venkatesh said the Department had not received any information on the statues.

However, the authorities would hold a review of the excavations, he added.