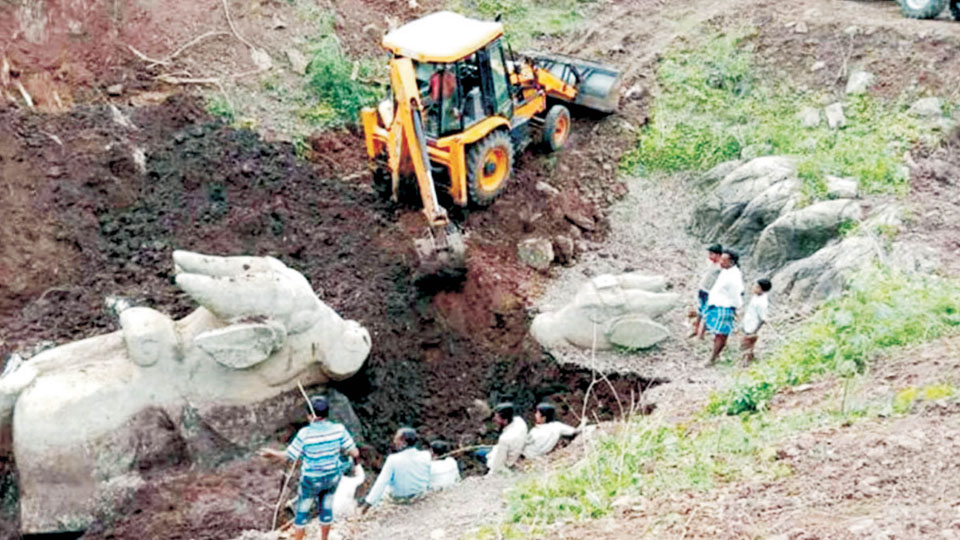 Mysore/Mysuru: While scores of Lord Shiva idols (lingas) and his Nandis got a lot of attention and pujas during Mahashivarathri on Tuesday, the ancient and historically significant twin Nandi statues that were discovered at Arasinakere in Jayapura hobli of Mysuru taluk remained in a neglected state, without any rituals.

The twin Nandis were discovered in 2019 and despite many promises, the authorities have neglected the statues and except for the ‘taking over’ of the idols by the Department of Archaeology, Heritage and Museums, nothing much has happened on the ground and the statues are usually underwater whenever water is released from Varuna Canal. The statues are visible only during summer when the canal water dries up.

In 2019, villagers of Arasinakere unearthed the two giant white soap-stone statues of Nandi facing each other in a field (Survey Number 71). The idols are monolithic and were buried deep inside the earth. While one Nandi statue measures 15ft in length and 12 ft in height, the other statue is smaller.

Archaeologists say that the statues appeared to belong to the 16th or 17th century, dating back to the post-Vijayanagar period. The statues are carved out of a single rock and are incomplete. While one is 60 percent complete, the other is 85 percent complete.

The excavation caught the attention of the officials from the Department of Archaeology, Heritage and Museums and teams visited the spot and promised that the statues will be fully excavated and protected along with other historic monuments of Arasinakere.

Villagers were told that the twin Nandis will be shifted and a temple would be built for the villagers to perform rituals. But the assurances remained unfulfilled and the statues have remained buried in mud.

Villagers say that Jayachamaraja Wadiyar, who had heard about a temple that had remained underwater, came to the village and saw water that had covered the entire field. He ordered his workers to clean the water but men could not accomplish the task even after weeks of relentless work as the continuous presence of water was hindering all work.

Jayachamaraja Wadiyar had to be content by performing puja to the water. Even now, this legend is narrated by the villagers. Soon after the excavation began, it gained the attention of the titular head of the erstwhile Mysore royal family Yaduveer Krishnadatta Chamaraja Wadiyar and other historians who visited the spot along with Archaeology Department officers.

Villagers said that the Department officers had asked them not to do any work around the statues as they are protected monuments. “Neither they excavated the land nor allowed us to do so. We would have cleaned up the premises and would have celebrated Mahashivarathri. But we were unable to do so,”        regretted the villagers.