Home » News » Faithful who vowed to see Kumaraswamy as CM 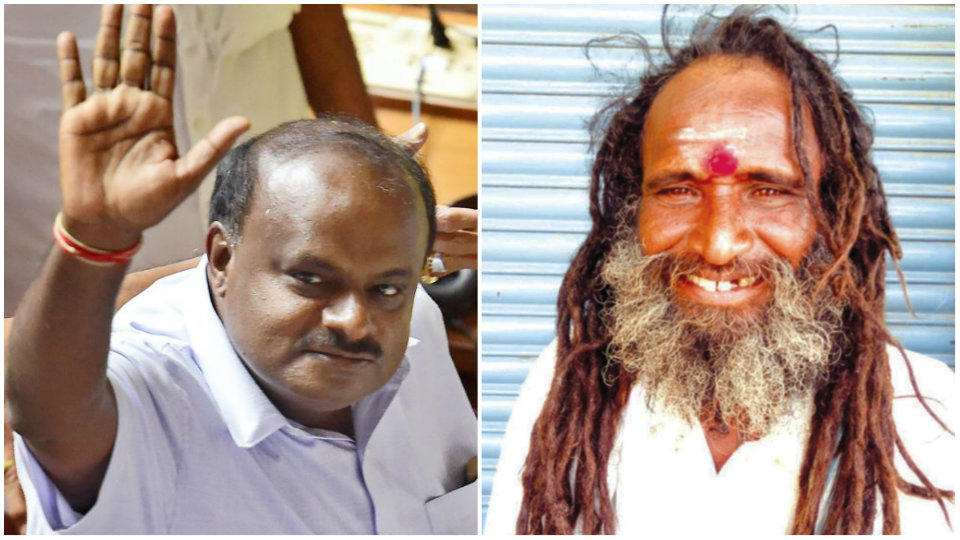 Faithful who vowed to see Kumaraswamy as CM

Berya: The election season in Karnataka is over for now and so is the time for making vows and fulfilling them. Just as a staunch JD(S) follower who had made a vow that if G.T. Devegowda (GTD) wins from Chamundeshwari constituency and H.D. Kumaraswamy (HDK) becomes the Chief Minister, he would walk to Tirupati to fulfil the vow, here comes the news about another HDK faithful who wanted to see his beloved leader occupy the CM’s post for which he had made vow not to cut his hair or his beard since the last 11 years.

This faithful is Ramakrishnegowda from Meluru village near Berya of K.R. Nagar taluk who when he heard the news that Kumaraswamy is going to be sworn-in as Chief Minister has rejoiced with his family. He was completely impressed with the work done by HDK during his term as the Chief Minister earlier, as he had strongly felt that HDK had worked hard in the interest of farmers and implemented many pro-people programmes.

“After serving as the CM for 20 months, the hope of Kumaraswamy becoming the CM again had almost vanished. After he relinquished power, the spate of farmers’ suicides, corruption and the way the poor were being treated had a depressing effect on me. I strongly felt that only if HDK returns to power can such problems be solved,” he said.

According to Ramachandregowda, another incident that had an effect on him was when in 2007, former Prime Minister H.D. Deve Gowda (HDD) had fought in the interest of the farmers against the NICE project the then government had not only tried to scuttle the former PM’s moves but also called the farmers ‘hired goondas’ and ridiculed Deve Gowda. “Hence, I then thought that if Kumaraswamy returns to power then the people of the State can live in peace. With this in mind, I went to Sri Yoganarasimhaswamy Temple in Saligrama 11 years ago and made a vow that I will not cut my hair or the beard till my wish of seeing Kumaraswamy as the CM again fructifies,” he said.

“One of the best initiatives of HDK was the ‘Gram Vastavya’ programme. When he went and stayed in the house of an AIDS infected patient, my respect for him grew more. Hence, I am the happiest person to see him return as the CM,” he said.

Recalling how he had met Deve Gowda in February 2013 during the latter’s visit to Sri Yoganarasimhaswamy Temple in Saligrama, he said that HDD had asked him to cut the matted hair. “But I told him that till your son Kumaraswamy comes back as the CM I will not cut the hair and the beard and HDD had become very emotional on hearing of my resolve,” said Ramakrishnegowda with tears in his eyes.

“I have decided that after Kumaraswamy takes oath as the Chief Minister, I will go to Kashi and Melukote and offer my hair to fulfil my vow,” he said.

It is not just my vows but also the hard work and prayers of lakhs of JD(S) workers that Kumaraswamy has returned to power. I have the confidence that he will strive hard to work in the interest of the people and the development of the State.

Ramakrishnegowda is going to participate in the swearing-in ceremony of H.D. Kumaraswamy as his wishes have come true. He has also expressed his wish to straight away go to Kashi from the there. The JD(S) workers have decided to donate money for his pilgrimage to Kashi.

My father was looking very weird with his matted hair and long beard which was also causing a lot of discomfort among the family members. A few of the relatives were ridiculing him. However, my father was adamant and finally his wishes have come true. We are as happy as my father that Kumaraswamy has become the Chief Minister.