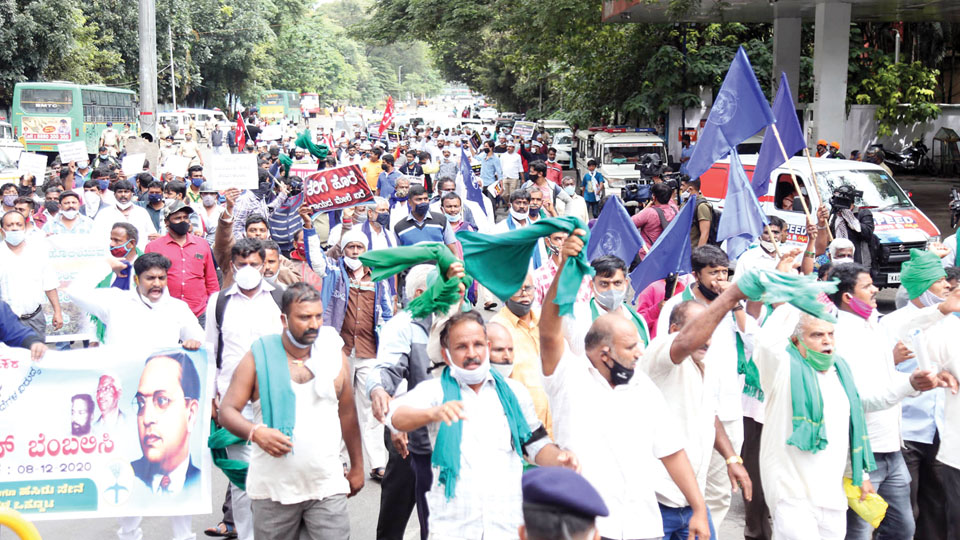 Bengaluru: Protest rallies by Karnataka Rajya Raitha Sangha (KRRS) and Karnataka Rakshana Vedike (KRV) to push for repeal of the new agricultural laws have begun from two different places in city this morning.

While KRRS, which started the rally from Krantivira Sangolli Rayanna (KSR) Railway Station, wants to lay siege to Vidhana Soudha, the KRV activists want to gherao Raj Bhavan as symbol of protest. Both the protest rallies were midway when we went to the Press.

The Police have made elaborate security to prevent both the protest rallies from reaching their end points. The farmers are staging ‘Baru Kolu’ protest symbolising whipping the BJP-led NDA Government for its anti-farmer policies.

Meanwhile, Chief Minister B.S. Yediyurappa has flayed both farmers and Kannada activists for holding protest rallies daily and disrupting traffic. It was unbecoming on their part to do it every day. The State Government would not allow it. The farmers are free to come for discussion with him any time on the amendment to APMC Act which was beneficial for agriculturists.