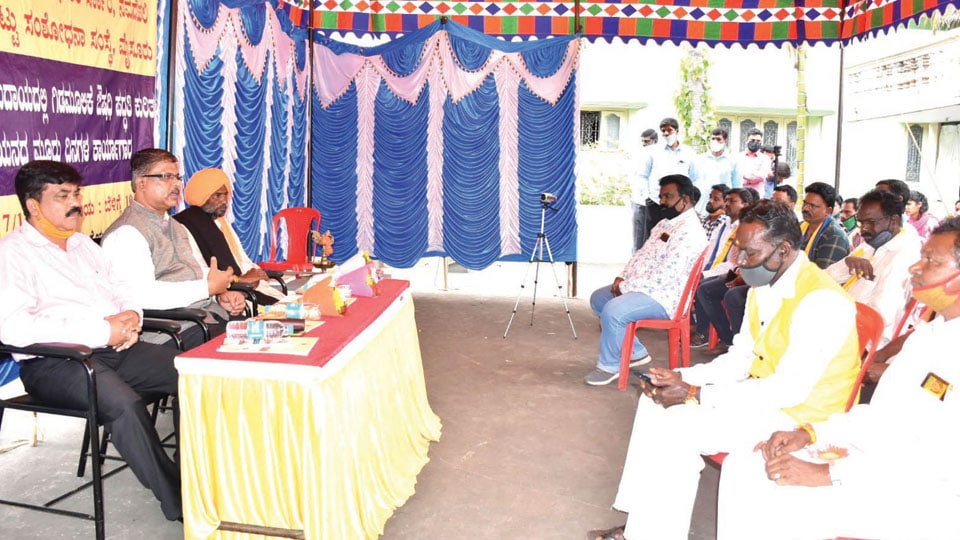 Mysore/Mysuru: There are more than 50 tribal communities in Karnataka and many of them are on the verge of extinction. They are contributing to the society in their own unique way, said Head of the Department of Anthropology, University of Mysore (UoM), Prof. M.R. Gangadhar in city on Monday.

He was participating in a three-day workshop organised jointly by Karnataka State Tribal Research Institute (KSRTI) and the Union Ministry of Tribal Affairs at KSRTI premises.

Prof. Gangadhar, who inaugurated the workshop, regretted the pathetic condition in which the members of tribal communities were leading their lives without proper facility, recognition and even basic amenities.

“Successive Governments — both at the Centre and in the State — make tall claims of having spent thousands of crores of rupees on the welfare of the tribals every year and in every Budget. But a vast majority of the tribals continue to live in misery. No one knows where the money goes as the condition of tribals has not changed at all,” he said.

He said that many laws dealing with forest conservation have dealt a body blow to the tribals as they are prohibited from collecting produce from the forests for their needs and medicines. These tribals live out of forest produce and the laws have snatched away their very livelihood. The Government must allot land so that the tribals could grow and nurture such plants themselves, he added.

Many tribals have migrated to towns and cities thereby losing their unique and distinct identity. Their culture is lost forever and have remained only in books as part of Anthropology syllabus, he revealed.

Addressing the gathering, Prof. T.T. Basavanagouda, Director of KSTRI, said that he had recommended to the State Government to allocate 10 acres to each practitioner of tribal medicine (Naati Vaidya) so that they can have a garden to nurture medicinal plants.

“Practitioners of tribal medicine are socioeconomically backward and are largely found in pockets of Bidar and Harihar, where they dwell in huts. “They struggle to eke out a living. They are practising the craft that has been handed over to them by their ancestors. Unfortunately, this practise will be lost for ever if steps are not taken to protect them,” he opined

Citing the example of Rajgond tribals who live in parts of Bidar, Bengaluru and Davanagere, Prof. Basavanagouda said that only 5,000 odd of the community members are spread across these places. Some of the Rajgond tribals have been invited for the workshop where they will share their expertise in preparing traditional medicine.

Also, six tribal medicine experts are attending the workshop and they too will share knowledge about the medicines. The knowledge will be documented and steps will be taken to conserve them, he added.

He said that KSRTI had the intention of going with the Union Government’s ‘Vocal for Local’ concept and has organised this workshop to discuss and implement policies and programmes to preserve the traditional system of medicine.

“Of the more than 50 tribal communities spread across Karnataka, the KSRTI was able to document the history and practices of 23 of them, including Soligas, Jenu Kurubas, Kadu Kurubas and Malekudiyas. We will submit a report to both State and Central Governments once we have completed the report and contribute to the conservation of traditional medicine,” Prof. Basavanagouda explained.