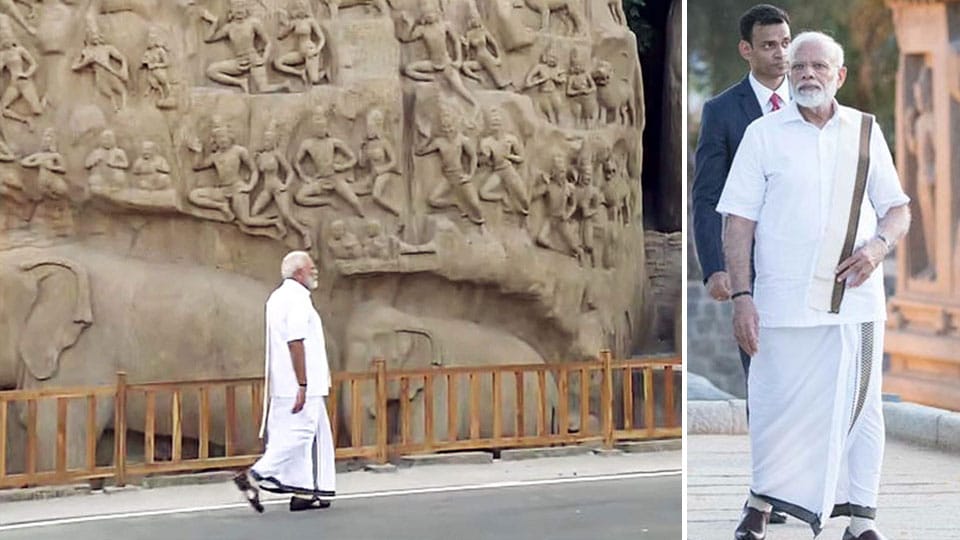 Yesterday our Prime Minister was a cynosure of all eyes as he welcomed the Chinese President Xi Jinping at Mamallapuram (Mahabalipuram) in Tamil Nadu. Prime Minister Narendra Modi wore crisp white traditional Tamil Karai veshti (dhoti with border), angavastram (a stole) and a half-sleeve white shirt.  What a fantastic sartorial choice — both for its visual appeal and its political message.

The Prime Minister, while building an ‘international relationship’ with our neighbour, was also building an ‘internal relationship’ with Tamil Nadu. BJP has never been accepted in Tamil Nadu in spite of it having the most revered Hindu temples. And after Amit Shah’s gaffe about Hindi imposition, Tamils, known to be more obsessive about their language than other States, immediately attacked BJP.

But it looks like this Amit Shah gaffe has given the PM an opportunity to win Tamil hearts and he has  used the veshti and vastram to good effect.

Political and Corporate leaders have used attire as a tool to send a message and also create perception. Everyone from Gandhiji to Indira Gandhi, from Fidel Castro to Steve Jobs. But by far the most memorable dress any of our leaders wore in recent times was at the 10th India-ASEAN Summit in Phnom Penh, Cambodia.

Our then PM Dr. Manmohan Singh, like other world leaders who had gathered there, wore a traditional Cambodian silk shirt. While most of the leaders seemed to have chosen their colours carefully, with US President Barack Obama in an elegant grey printed shirt, our Prime Minister looked like a bottle of fanta! The orange drink with a blue cap.

Indeed some may say sartorial appropriateness does not matter. It may be so if you are an eccentric tech genius like Steve Jobs of Apple Computers who always wore black turtle-neck top, blue jeans and grey sneakers. But a political leader’s attire is serious business.

Clothing, poise, body language, all these matter for they create perception, based on which attitude towards you and in case of a Nation’s leader, perception of your country changes to a certain extent. The manner in which we dress, the colours we choose, is a communication system which affects how we perceive others and how we are perceived.

That’s why many leaders are known to have wardrobe consultants. In USA, during election, fashion is also a talking point. In fact, most US Presidents wear ties with bright red being the highlighted colour. It’s not because they like it, it is based on the visual perception it creates in the viewer and voter. Red is seen as a colour that conveys strength, stability and power. All the characteristics a Commander-in-Chief needs to have.

In fact, Gandhiji knew the power of attire. Gandhiji wanted to look and live like the poor, not just so he could relate to their poverty but he could win their solidarity at a time when the Nation needed an icon who could unite people. And this image-building  was expensive; that’s why Sarojini Naidu said, “It cost the party (the Congress) a fortune to keep Gandhi in poverty.” Why? Well, one example: Gandhiji drank only goat’s milk as only the poor drank it. So a goat had to be packed off with Bapuji wherever he went, even on his train journey. A goat can be an expensive passenger.

Similarly, does anyone think that late President Dr. A.P.J. Abdul Kalam simply liked to have that 60s style inconvenient hairdo? No. It was an image he obviously created for himself. Image of a humble scientist who had so much on his mind that he did not care about what was on his head. Well, his haircut may have looked like it never came out of the 1960s but the price was not — it cost the late President Rs. 500 per hair cut at Habib’s Salon in Delhi.

The same strategy is used when the Harvard-educated P. Chidambaram wears his dhoti and balances his shawl on his shoulders. For the same reason,  once a safari suit wearing Siddharamaiah, now wears dhoti. It’s all about relating to the masses.

Even Congress President Sonia Gandhi is known for her dignified sartorial choices. And she is conscious of it because speaking at the National Institute of Fashion Technology in Raebareli, she said: “There is a trend in Indian fashion to overdo and over-embellish clothes. Apart from completely overshadowing the wearer, such garments are very uncomfortable to wear.” Yes, she sounded more comfortable talking fashion than politics and policy. Guess it’s genetic. You can take an Italian out of fashion, but can never take fashion out of an Italian. Let it be.

By the way, our PM is also a fashionista now. In his first visit to the US after becoming PM, The New York Times newspaper wrote an article about him titled ‘A Leader Who Is What He Wears.’ The Washington Post stated, “Move aside, Michelle Obama. The world has a new fashion icon. And no, it’s not Vladimir Putin, despite his fitness regimen — it’s India’s new Prime Minister, Narendra Modi.”

For now, it is obvious, since the Amit Shah gaffe, the Prime Minister is on a Tamil Nadu pleasing-spree. In his UN address, he quoted Sangam era poet Kaniyan Pungundranar. Then he visited IIT Madras where he praised Tamil cuisine and highlighted the classical status of Tamil Language. Then his spontaneous hug of ISRO Chairman K. Sivan, not only showed his “soft” side but it was a blessing in disguise as Sivan is a Tamil. Now he has not only worn veshti, but also relished tender coconut water and cleaned their beach. In doing so he has also given a boost to Mahabalipuram’s tourism.

With all this, will BJP finally break free from being seen as a “North Indian Party” in the South? Will these moves of the PM defang the regional Tamil parties who protect their electorate by inciting fear of “Hindi-invasion”? Will this series of acts propel our PM to be accepted as Thalaivar?

It could, but if it doesn’t then the PM can do one final act — flick that lungi and start gyrating like SRK to “Muchho ko thoda round ghhumake, Anna ke jaissa chashma lagake, Coconut me lassi milakke… Lungi dance, lungi dance…”

And PM Modi can pull it off too. After all, he is a shrewd politician, which means he knows when to be a showman and fill seats in the Theatre of Democracy — The Parliament.