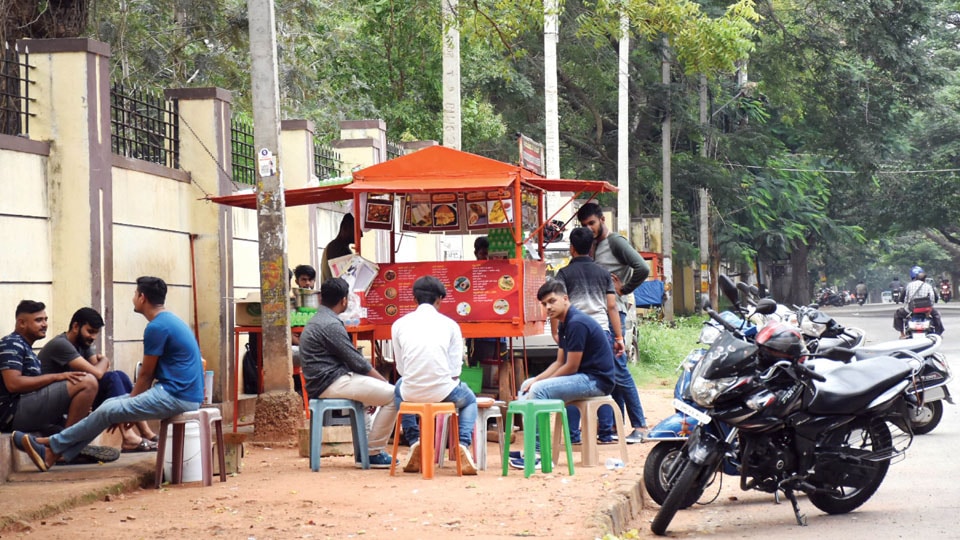 Food changes every day and people want to try the best of everything from street food to eating out at classy restaurants. Street food is very much into fashion because of the cost effectiveness and unbeatable taste and flavour.

So popular are their dishes that many restaurateurs have included certain street food items in their menu.

This win-win formula for both hoteliers and street food business is, however, spoiled by the illegal and unauthorised way food is sold on roadsides, evading all rules and hygiene regulations. Many unauthorised food joints have mushroomed all over Mysuru city of late especially after the killer second wave is waning.

While there are hundreds of authorised footpath vendors who have been doing legitimate business after obtaining licences from the Mysuru City Corporation (MCC), there are many joints who do not have licences and moreover they are unhygienic. These unregulated food joints are spoiling regulated business and are also affecting hotel business badly.

All kinds of fast food joints were closed during the peak of COVID since last year and for most of the months, only parcel services were allowed at hotels. Now that the pandemic is petering out, the street food business is back with a bang and many youths who have lost jobs have started street vending.

While hoteliers do not have a problem with legitimate and licenced street food vending, they have a problem with illegal ones that have sprung up all over Mysuru and according to them, people are turning away from eating in hotels and are preferring to eat out on streets. “We cannot object to legitimate business but we have to object to this illegal and unhygienic street food vending that has affected our business badly,” C. Narayanagowda, President of Mysuru Hoteliers’ Association told Star of Mysore.

“We obtain trade licences, pay taxes and foot all other expenses to conduct business that too with high maintenance costs. But still we have less customers compared to street food joints. Many hotel owners are unable to pay loans as business is dull,” he added.

For a hotel or restaurant to renew its licence, the owner will have to display the set of Government-formulated guidelines in a prominent spot, where all customers can view it and the licence of a restaurant or a hotel may not be renewed if these guidelines are not followed.

Under the guidelines, a hotel, restaurant or food stall has to cook and serve food in stainless steel utensils. They have to maintain cleanliness inside the kitchen and around the area where food is served. Only potable drinking water must be used for cooking.

The guidelines have prohibited the use of newspapers to serve food items, a common practice among the street food stalls.

Dustbins have to be provided in restaurants and hotels. However, no such guidelines are applicable to street food vendors and many of them get away even if customers complain, allege the hoteliers.

There are over 8,000 vendors who have obtained licences from the MCC and these include roadside food joints also where they are conducting business in designated spots. “There are many unauthorised fast food joints in front of many hotels and the tragedy here is customers of hotels are eating by the side of the roads. The situation is so bad that while rooms are booked in hotels, the dining is on the streets,” Narayanagowda added.

“We have issued identity cards to all those roadside food vendors who are conducting business at designated spots. They have to mandatorily follow the rules stipulated by the MCC and only authorised vendors can do business. The MCC has already initiated the task to vacate food vendors who are occupying footpaths. Those who don’t have identity cards will be evicted,” said Dr. D.G. Nagaraj, Senior Health Officer, Mysuru City Corporation (MCC).