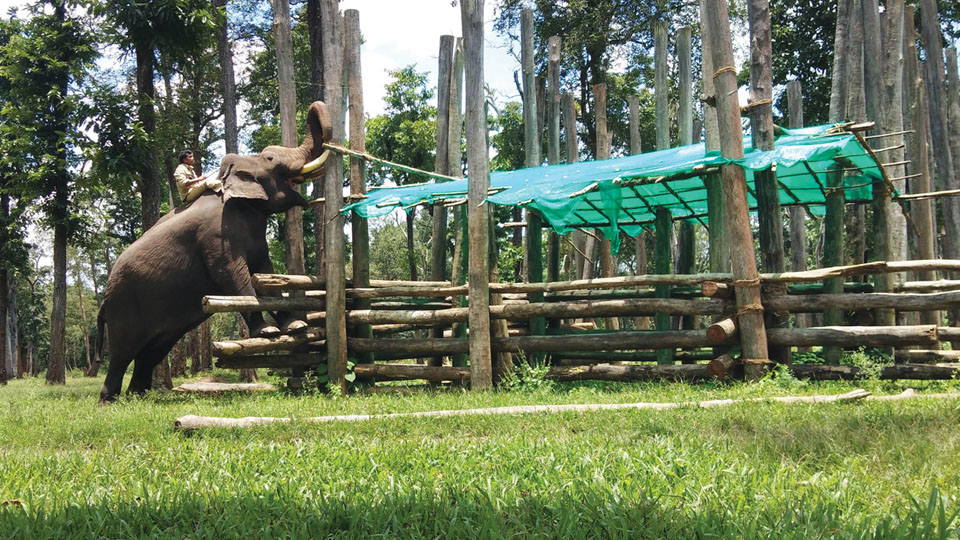 Fearless Abhimanyu had made a pair of huge wild elephants retreat: Former Veterinarian

Speaking at the fifth series of the webinar, Dr. Chittiappa said that during a combing operation  undertaken to capture wild elephants that had created ruckus in villages bordering forest area, two wild elephants attacked the forest team all of a sudden but Abhimanyu, who was part of the team, did not display any signs of fear and tackled both the elephants making them retreat.

Pointing out that Abhimanyu is not only strong, brave and fearless but also intelligent, who is quick to understand, learn, and devise or apply ideas, he said that Abhimanyu perfectly fulfils the responsibility given to him and added that he (Abhimanyu) understands where he is being taken, when being led from his camp and prepares himself for the task. Continuing, Dr. Chittiappa said that whenever ‘Gaadhi’ and ‘Namdha’ is placed on Abhimanyu’s back, he understands that he is being led to capture a tiger or elephant and he prepares for the task mentally and added that this is the speciality of Abhimanyu.

“My father has led Abhimanyu successfully in pulling the chariot during ‘Jumboo Savari.’ I have participated 20 times in Dasara at Mysuru and three times in Srirangapatna Dasara. I was the Mahout, who led the elephant carrying a wooden howdah amongst the crowd in Srirangapatna. I have also participated in operations undertaken to capture more than 100 wild elephants and eight tigers. We both have good relationship between us and I love him and take care of him for which he trusts me. Maintaining this relationship is my responsibility now,” said Vasanth.The webinar series will go on till Oct. 2 everyday at 5.30 pm. In today’s webinar, experts will speak about Balarama and other elephants. Those interested may log on to https://tinyurl.com/y3ml394a