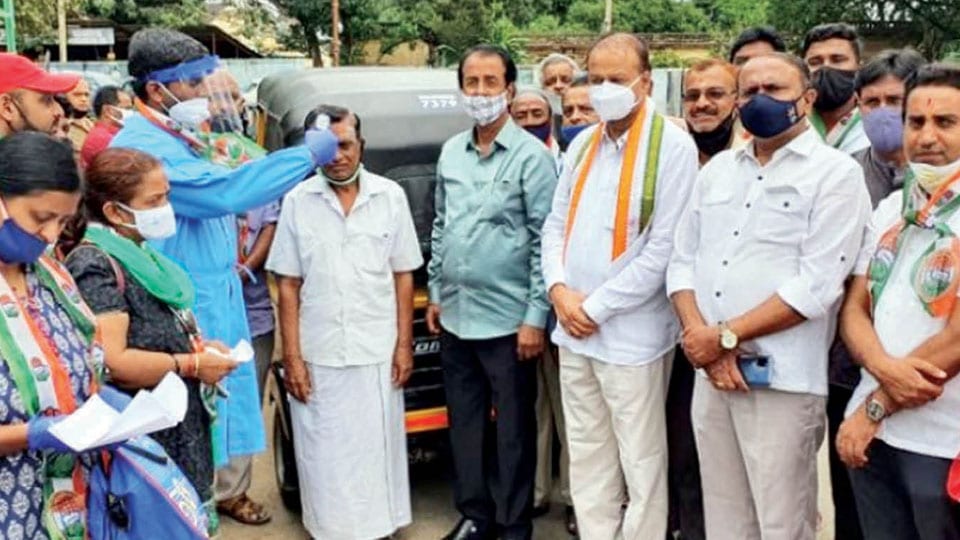 Mysore/Mysuru: Former Chamarajanagar Congress MP R. Dhruvanarayan  said that the Government must spend Rs. 15 crore Dasara fund for stopping the spread of the deadly COVID-19 contagion which is causing havoc across the globe.

Speaking at the launch of the party’s ‘Arogya Hasta’ — COVID awareness programme — at Devaraja Mohalla in city, by offering puja at Amrutheshwara Temple in the area on Saturday, he said that the Government has decided to celebrate Dasara-2020 in a simple manner in the wake of COVID-19 crisis and in this backdrop, it would be wise on the part of the Government to spend Rs. 15 crore Dasara fund for COVID care.

Alleging that workers of the Health Department have not been paid wages for three months, he said that the Government has constrained Health Minister B. Sriramulu from making announcements on Corona issues.

Ridiculing that Ministers Dr. K. Sudhakar, R. Ashoka, Suresh Kumar and Dr. C.N. Ashwathnarayan have been issuing statements on COVID crisis, Dhruvanarayan maintained that the Health Minister in neighbouring Kerala was given the freedom to make Department announcements, while this is not so in the case of Sriramulu.

Lauding Kerala for its measures to tackle Corona, he asked the State to learn from Kerala, which has succeeded in bringing down mortality rate to the lowest.

Accusing the State Government of failing to control private hospitals who have indulged in looting the public in the name of Corona care, the former MP wanted the Government to convene a meeting of the heads of all Departments to discuss the issue.

Former MLA Vasu, echoing the observations of Dhruvanarayan, said that even though the Government has announced that it would be a low-key Dasara this year, it is ridiculous that Rs.15 crore has been announced for the ten-day festival.

READ ALSO  Get vaccinated to protect yourself from COVID-19: Yaduveer

He wanted the Government to spend this fund for upgrading the facilities at K.R. Hospital and the designated COVID Hospital on KRS Road.

He also urged the Government to provide ventilators and oxygen facilities at Government-run hospitals, which are catering to the health needs of the poor.