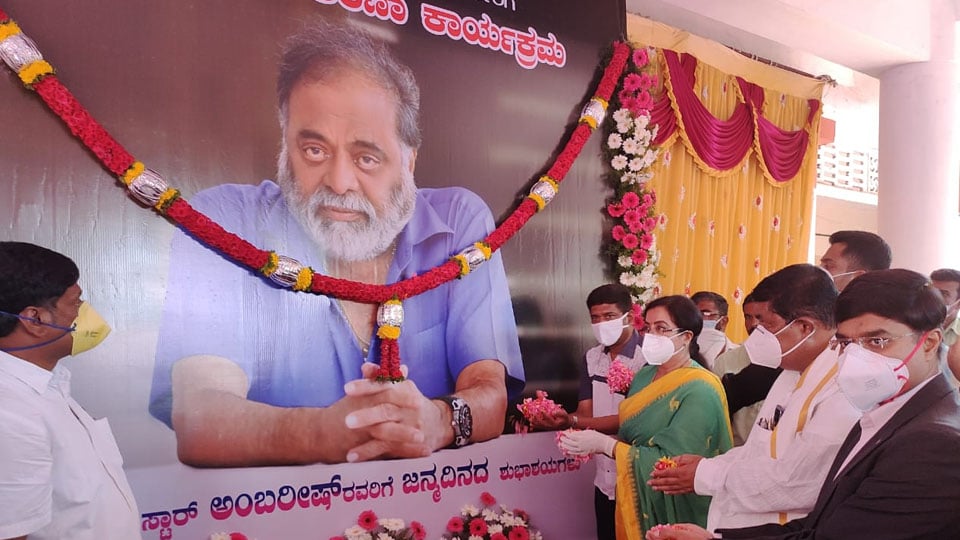 On the occasion, Sumalatha handed over six ventilators to Mandya COVID Hospital and distributed grocery kits to about 300 specially-abled persons.

At a function organised at Maddur, Food and Civil Supplies Minister K. Gopalaiah and Sumalatha distributed grocery kits to ASHA workers. Speaking on the occasion, Gopalaiah said that Ambarish was an extraordinary actor and politician who gave richness to the cultural and art world and added that the later actor tendered his resignation to his Union Minister’s post when his self-respect was questioned.

Pointing out that Ambarish is not dead but very much alive due to his excellent works, Minister Gopalaiah said that the late actor had made a name for himself in the cinema world.

Stating that Ambarish had sanctioned 500 houses to his (Gopalaiah) Constituency when he (Ambarish) was a Housing Minister, Gopalaiah said that the houses sanctioned then have been completed now.

Thanking Minister Gopalaiah for distributing grocery kits on Ambarish’s birthday, MP Sumalatha said that the Corona Warriors were fighting the virus by risking their lives and added that she had seen God in ASHA workers. She further said that it was the wish of everyone that Coronavirus goes away quickly so that the people could live peacefully.