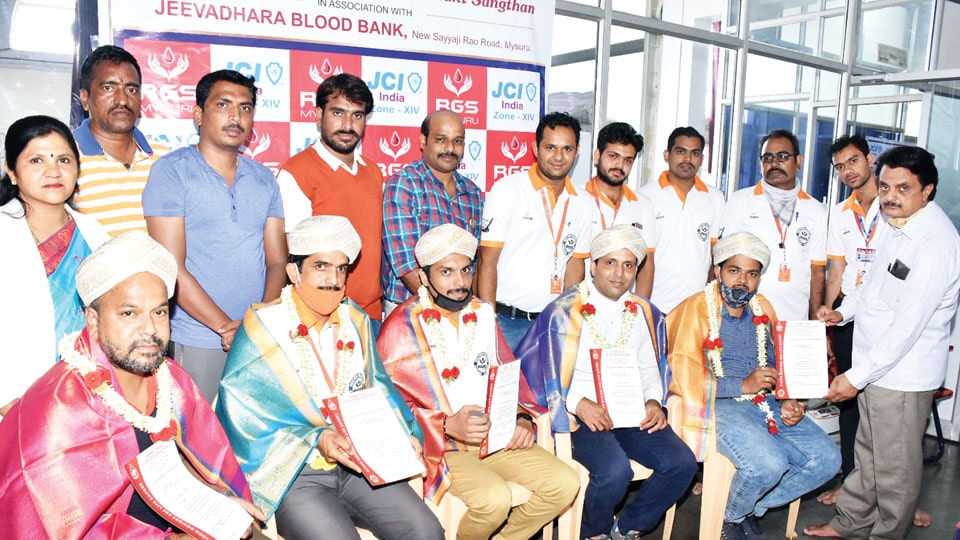 Mysore/Mysuru: On the occasion of World Blood Donor Day (June 14), DTS Foundation, Mysuru, felicitated blood donors who have donated blood for more than 50 times at a programme organised at Jeevadhara Blood Bank on Sayyaji Rao Road in city.

Over 50 donors voluntarily came forward to donate blood at the camp including around 25 members of JCI Mysore Royal City who donated blood.

Speaking after felicitating the blood donors, DTS Foundation President D.T. Prakash said, “Everyone must know the importance of blood donation. In the community, there are some superstitious beliefs about donating blood, which we need to overcome and support this noble endeavour. Any healthy adult, both male (once in three months) and female (once in four months) can donate blood, but anyone who is over 60 years or suffering from any illness are not eligible to donate blood.”

Asserting that blood donation is not harmful to the donor, he said: “Blood cells would regenerate itself in a few months. If the donor is a healthy person, donor will not feel weak after blood donation. It would reduce cholesterol, thereby decrease the risk of heart disease. On any special occasion such as national holidays, birthdays or marriage anniversaries, donating blood would be a good idea, as it would save someone’s life. Everyone, especially youngsters, should come forward to donate blood.”

Speaking after being feted, donor Yuvaraj said, “After seeing my posts on social media such as Facebook and WhatsApp about my blood donation, over ten youngsters came forward to donate blood. When a pregnant woman was in need of A -ve group blood, one of my contacts voluntarily donated blood to her. As of now, I have donated blood for more than 50 times and I am still healthy. According to some studies, regular blood donation would decrease the chances of heart problems and stroke for up to 75%. I request every citizen to voluntarily donate blood on a regular basis to save the lives of accident victims, post-surgery patients, pregnant women and others.”