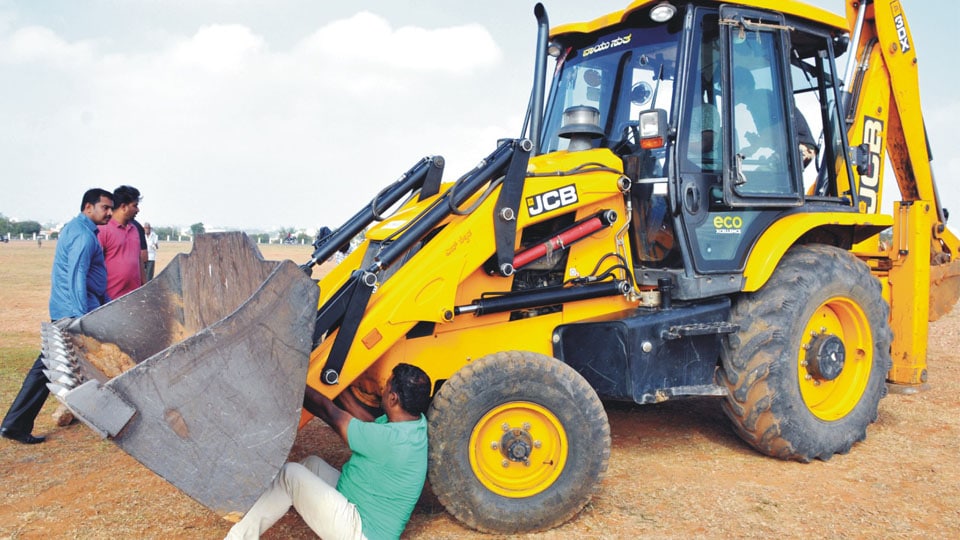 Demolish illegal fencing, warn people in Survey No. 4 not to put up fences on disputed land

Mysuru:  Tension prevailed for sometime around the  helipad next to Lalitha Mahal Palace Hotel here this morning when a team from the government came to demolish the illegally erected fencing by one K. Manu, who claimed to be a General Power of Attorney (GPA) holder of seven acres of private land around the helipad.

Following complaints of illegal fencing and encroaching of government land around the helipad, a team of Revenue and Public Works Department officials led by Tahsildar T. Ramesh Babu, PWD Assistant Executive Engineer (AEE) Siddegowda, Junior Engineer Lakshmipathi, Alanahalli Police Inspector K. M. Manju and others arrived at the spot with a JCB and tractors to clear the encroachments today morning.

Manu, the GPA holder, who had erected the fence, was also present there and as the JCB machines began to demolish the fencing poles, he ran and laid  down under the wheels of the JCB machine. He then refused to budge and the Police had to drag him out and arrest him.

According to the complaint filed by Tahsildar Ramesh Babu at Alanahalli Police Station, the authorities have taken Manu into their custody on charges of trespassing into government land, besides obstructing government officials from discharging their duties.

Later, the officials removed the barbed wire fencing and poles which were put up around the disputed land. 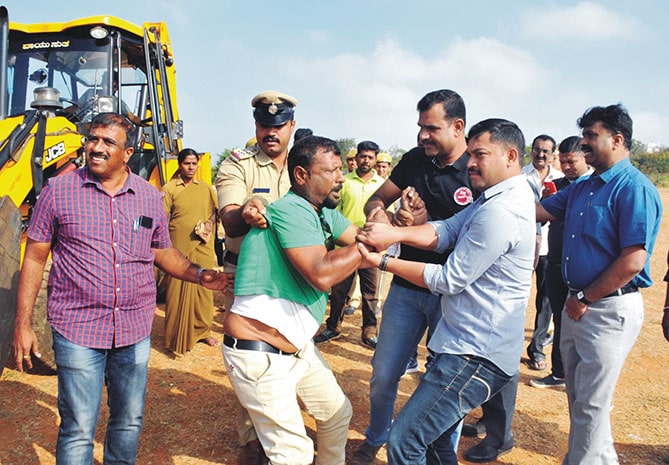 Speaking to Star of Mysore, Tahsildar Ramesh Babu said that the seven acres of land coming under Kurubarahalli Survey No. 4 is said to be owned by one S. Meenakshi and Manu may have the GPA. But since this land has been declared as government land and is under dispute, erecting fence in the said land is illegal, he pointed out.

The Tahsildar added saying that the Deputy Commissioner (DC) had passed an order in 2015 declaring a total of 1,563 acres and 31 guntas of land coming under Kurubarahalli Sy. No. 4 as ‘B-Kharab’ land. The land claimed by Manu also falls under this ‘B Kharab’ land and there is no provision for trespassers to violate this order.

He said that he had given directions to Alanahalli Police to file a criminal case against Manu for violating Karnataka Land   Revenue Act, 1964.

Signboards to be put up on government land

Tahsildar Ramesh Babu also said that the Revenue Department and the PWD will put up signboards in all government lands coming under Kurubarahalli Survey No. 4, with a warning that trespassers would be prosecuted.

It may be recalled that S. Meenakshi had erected boards on seven acres of land around the Lalitha Mahal helipad which she claims is hers and in the signboard also claimed that  the High Court had stayed the then Deputy Commissioner’s order declaring land coming under Kurubarahalli Survey No.4 as ‘B’ Kharab land (Government land). After putting these signboards, the fencing work had begun at the said disputed land last week.